Using observations from the NASA/ESA Hubble Space Telescope (HST), the Subaru Telescope, the Canada-France-Hawaii Telescope (CFHT), the Gemini North Telescope, and the W.M. Keck Observatory, an international team of astronomers has studied a giant filament of dark matter in 3D. Extending 60 million light-years from one of the most massive galaxy clusters known, the filament is part of the cosmic web that constitutes the large-scale structure of the Universe, and is a leftover of the very first moments after the Big Bang. 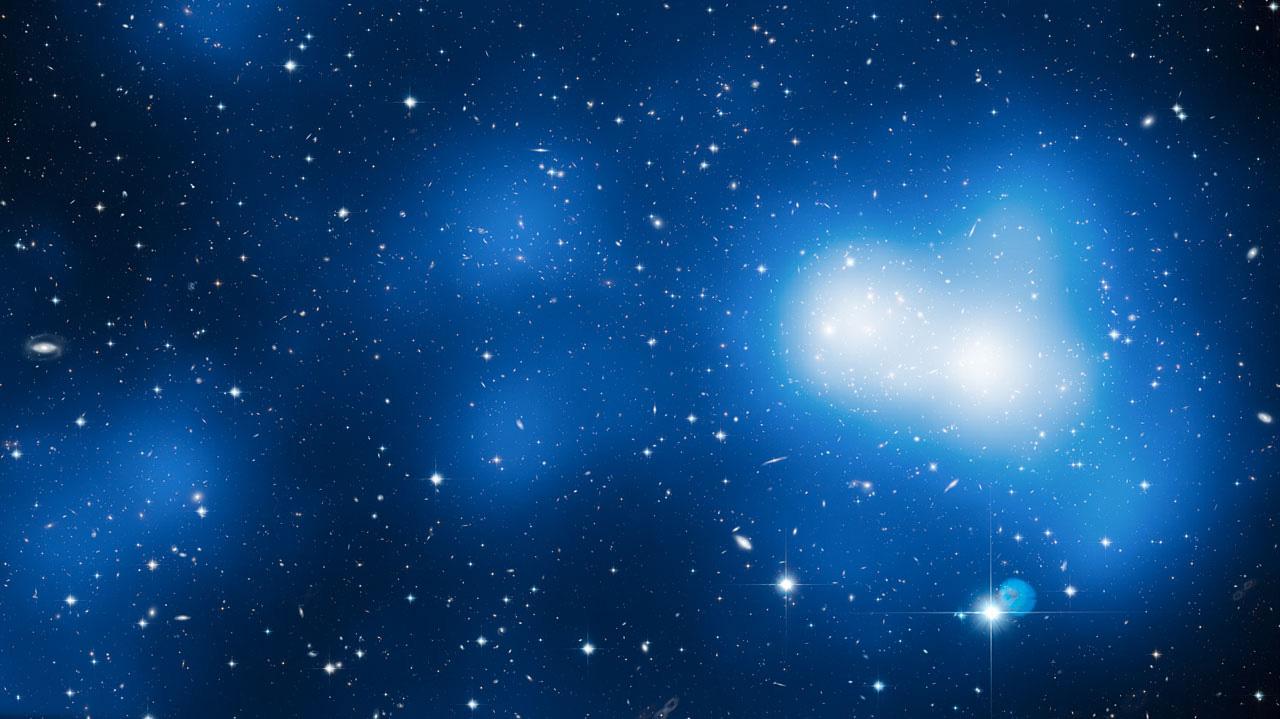 Figure: Composite image of MACS J0717. This enormous image shows Hubble's view of the massive galaxy cluster MACS J0717.5+3745 with an overlay of the filament of dark matter, which appears in light blue and extends out and to the left of the cluster core. This large field of view is a combination of 18 separate images. Observations from Subaru Telescope helped the researchers to map the filament's structure in three dimensions. Credit: NASA, European Space Agency (ESA), Harald Ebeling (Institute of Astronomy, University of Hawaii at Manoa), and Jean-Paul Kneib (Laboratoire d'Astrophysique de Marseille)

The theory of the Big Bang posits that variations in the density of matter in the very first moments of the Universe led most matter in the cosmos to condense into a web of tangled filaments. Computer simulations of cosmic evolution suggest a web-like structure of the Universe, with long filaments that connect to each other at the locations of massive galaxy clusters. However, these vast filaments are made mainly of dark matter, which is extremely difficult to observe.

The first convincing identification of a section of one of these filaments was made earlier in 2012. The current team of astronomers is researching the filament's structure in three dimensions. They combined high-resolution images of the region around the massive galaxy cluster MACS J0717.5+3745 (MACS J0717 for short), taken using the Hubble Space Telescope, the Subaru Telescope, and the Canada-France-Hawaii Telescope, with spectroscopic data on the galaxies within it from the Gemini North Telescope and the W.M. Keck Observatory. The team was able to locate thousands of galaxies within the filament and to detect the motion of many of them.

A model that combined positional and velocity information for all of these galaxies was constructed and this then revealed the 3D shape and orientation of the filamentary structure. As a result, the team was able to measure the true properties of this elusive filamentary structure without the uncertainties and biases that come from projecting the structure onto two dimensions, as is common in such analyses.

The results obtained push the limits of expected results based on theoretical work and numerical simulations of the cosmic web. With a length of at least 60 million light-years, the MACS J0717 filament is extreme even on astronomical scales. And if the team's measurement of its mass is representative of filaments near giant clusters, then these diffuse links between the nodes of the cosmic web may contain even more mass (in the form of dark matter) than theorists have hypothesized. A significant proportion of all the mass in the Universe may be hidden in these structures.

This article is an abbreviated version of a release from Hubble/ESA that appeared on October 16, 2012 at the following site:
http://www.spacetelescope.org/news/heic1215

The research paper on which this summary is based is presented in a paper entitled "A Weak-Lensing Mass Reconstruction of the Large-Scale Filament Feeding the Massive Galaxy Cluster MACS J0717.5+3745". The authors are Mathilde Jauzac, Eric Jullo, Jean-Paul Kneib, Harald Ebeling, Alexie Leauthaud, Cheng-Jiun Ma, Marceau Limousin, Richard Massey, Johan Richard. The paper will be published in the November 1, 2012 issue of Monthly Notices of the Royal Astronomical Society.