Using the Multi-Object Infrared Camera and Spectrograph (MOIRCS) mounted on the Subaru Telescope, a team of astronomers led by Dr. Masao Hayashi (National Astronomical Observatory of Japan or NAOJ) and Dr. Tadayuki Kodama (Subaru Telescope, NAOJ) has discovered a protocluster of galaxies in the midst of a vigorous process of formation. It is the densest and most active protocluster ever identified at so great a distance, 11 billion light years away from Earth (Note 1). The star formation rate in the protocluster is intense, sometimes reaching a rate over 100 times greater than that of the Milky Way Galaxy. Although old, inactive elliptical galaxies dominate present-day galaxy clusters, the recently discovered protocluster is a site where progenitors of clusters of current elliptical galaxies were just forming and growing rapidly. It will serve as an ideal laboratory for investigating how a cluster develops and how a special, dense environment can influence the formation and evolution of galaxies.

Research to Investigate the Formation of Protoclusters

The properties of galaxies strongly depend upon where they reside. Some galaxies occupy crowded, gravitationally bound regions called "galaxy clusters" and "galaxy groups" while others live in deserted areas called "general fields". In the present-day Universe, galaxy clusters generally contain old, elliptical galaxies that are not actively forming stars, and general fields usually encompass young disk galaxies that are actively forming stars. Why do these galaxies segregate into different habitats in the Universe? Investigation of the formation of distant protoclusters that are progenitors of local galaxy clusters may provide an answer. Clusters or "ancient cities" of galaxies are not everywhere. Discovering them in their "adolescence", when the surrounding environment influences their development, is likely to yield the best basis for studying how clusters of galaxies form.

The current research team focused their search on star-forming galaxies associated with the protocluster USS1558-003 (Note 2), which is 11 billion light years way from Earth. This target is a very dense region of old, mature or "red-burning" galaxies (Note 3), and occurs in the epoch from 9 to 11 billion years ago when the adolescent galaxies were growing vigorously. The team used MOIRCS mounted on the Subaru Telescope for their research; they also fitted MOIRCS with a narrowband filter customized for this target to capture the H-alpha emission lines (Note 4) coming from the star-forming regions (Figure 1). In addition, they searched for extremely red galaxies that are inactive and passively evolving.

Figure 1: Two views of the protocluster. (Left) A near-infrared, false-color image of the region (clump 2) where galaxies in the protocluster most strongly cluster. The objects marked with open green circles are H-alpha emitting galaxies. North is up, and east is to the left. (Right) Blinking images of broadband (Ks) and narrowband (H-alpha) emitters. The encircled objects showing H-alpha emitting galaxies are much brighter in the narrowband than in the Ks-band. (Credit: NAOJ)

The wide-field observations revealed that three notable galaxy groups of various sizes (Figure 2) make up the protocluster. The number of galaxies concentrated in these clumps is very high, about 15 times greater than that of general fields in the Universe at the same cosmic time. No other region known so far in the ancient Universe of 11 billion years ago or more has so many strongly clustered galaxies. The intense star-forming activity in the entire observed region of the protocluster amounts to new star formation equivalent to 10,000 Suns per year. The activity is analogous to watching the swift construction of an ancient, developing city, when elliptical galaxies were very young and growing rapidly in a dense environment. 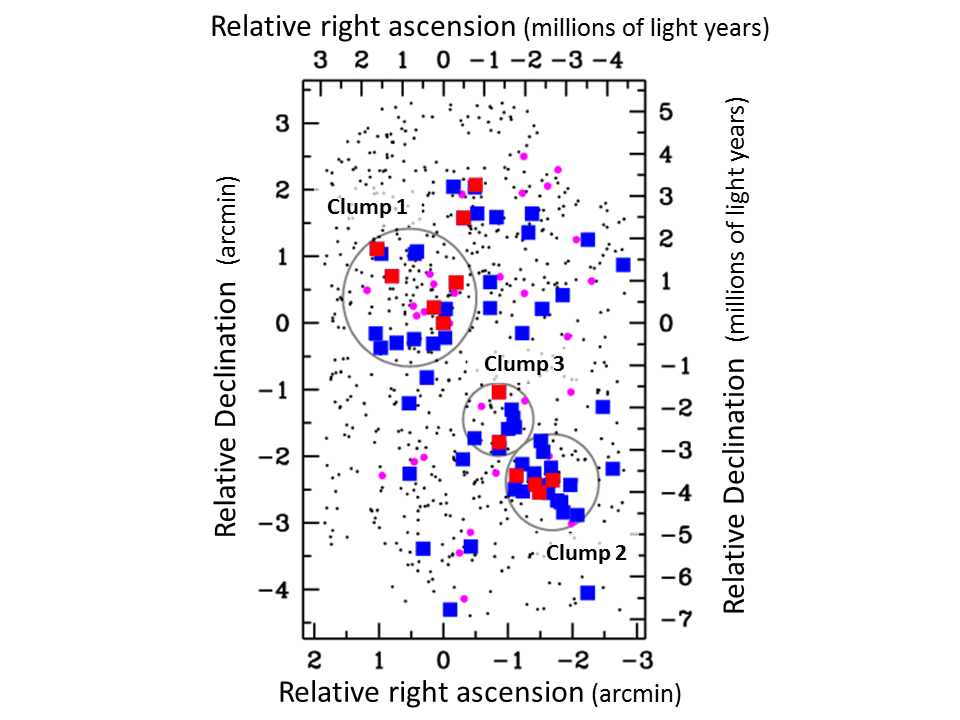 Figure 2: A wide-field map of an ancient celestial city, the USS1558-003 protocluster. The map shows the distances of the three clumps of galaxies from each other relative to the radio galaxy USS1558-003 located at (0,0). More specifically, the horizontal and vertical axes show relative distances in right ascensions and declinations in arcminute units with respect to the radio galaxy. North is up, and east is to the left. The black dots are all galaxies selected in this field. Magenta dots show old, passively evolving galaxies. Blue squares represent star-forming galaxies with H-alpha emission lines, while red ones show red-burning galaxies. Large gray circles show the three clumps of galaxies. (Credit: NAOJ)

Another important discovery about this protocluster is that almost all of the transitioning red-burning galaxies tend to be confined to the dense clumps. Their apparent preference for a location in the densest environment probably means that the protocluster is actually in its growth phase and having some environmental effects on the galaxies. The research team plans to examine the individual galaxies more closely in order to reveal what is actually happening as the cluster is forming.

Future Prospects from the MAHALO-Subaru Project

The results presented in this article are among the many exciting new findings that are just emerging from the "MAHALO-Subaru" project (Note 5), which focuses on identifying the fundamental physical processes that determine the properties of galaxies in dense environments. The project's research team, led by Dr. Kodama, is conducting systematic observations of a large sample of galaxy clusters and protoclusters at various distances, hence at various cosmic times. The results show that galaxy clusters observed at distances greater than 9 billion light years away generally have active star formation, even in their densest central regions, in contrast to present-day clusters in which old, inactive elliptical galaxies dominate. It appears that clusters grow from the inside out. They first grow rapidly in cores of protoclusters, and the sites of active growth of galaxies spread to the surrounding outskirts, like suburbs forming at the periphery of a city.

The research contributes to an understanding of how clusters and the galaxies within them form and grow with cosmic time. The research team sums it up: "We are now at the stage when we are using various new instruments to show in detail the internal structures of galaxies in formation so that we can identify the physical mechanisms that control and determine the properties of galaxies."

The authors thank Subaru Telescope for providing them with an opportunity to perform these exciting, important observations.

Support for this research was provided by The Japan Society for the Promotion of Science through Grant-in-Aid for Scientific Research 18684004 and 21340045.

3.A red-burning galaxy is a galaxy population in transition between actively forming stars in bursts and losing its star-forming activities. See the Subaru Telescope press release entitled "Red-Burning Galaxies Hold the Key to Galaxy Evolution"

4.H-alpha is a characteristic spectral line originating from star-forming regions within the galaxy. More specifically, it is a nebular emission line of neutral hydrogen's Balmer series at rest-frame 6563 angstrom. An emission line is a type of spectral line that indicates the radiation received from an object and provides information about its temperature and composition. Hydrogen is one of the most abundant elements in the early Universe, and it creates an H-alpha spectral line when ionized hydrogen recombines with an electron (a particle with a negative electrical charge).

5.MAHALO-Subaru: MApping H-Alpha and Lines of Oxygen with Subaru. Mahalo means "thank you" in the Hawaiian language.