A research group led by Dr. Masaomi Tanaka (National Astronomical Observatory of Japan), Dr. Koji Kawabata (Hiroshima University), Dr. Takashi Hattori (National Astronomical Observatory of Japan), and Dr. Keiichi Maeda (University of Tokyo, Kavli Institute for the Physics and Mathematics of the Universe) used the Faint Object Camera and Spectrograph (FOCAS) on the Subaru Telescope to conduct observations that revealed a clumpy 3D structure of supernovae (Figure 1). This finding supports a clumpy 3D scenario of supernovae explosions rather than the widely accepted bipolar explosion scenario. It advances our understanding of how supernovae explode, a process that has been a persistent mystery. 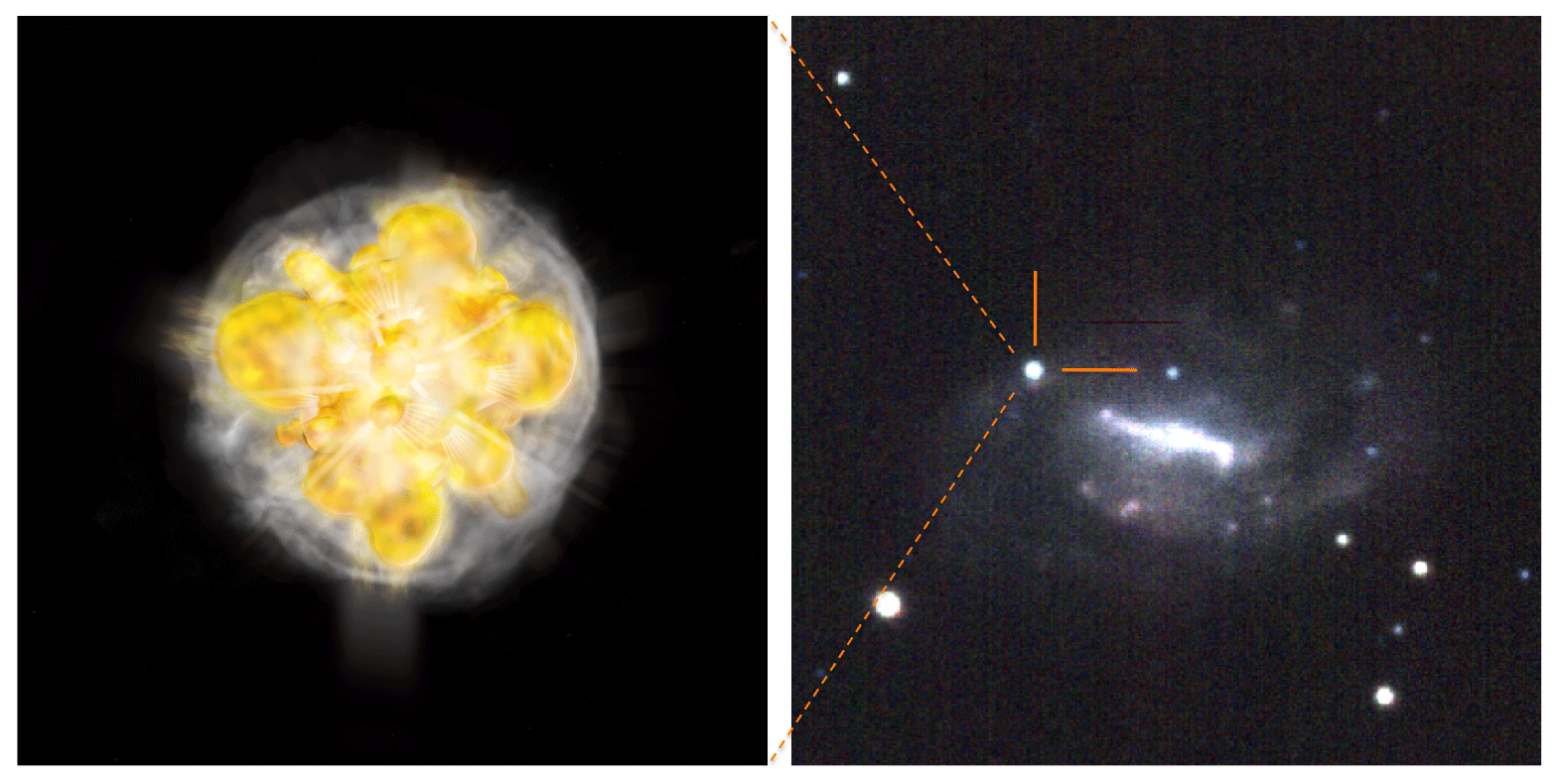 Figure 1: Schematic drawing of the 3D structure (left) and the image of SN 2009mi (right) captured with FOCAS on the Subaru Telescope. This supernova was discovered in the galaxy IC 2151 (in the direction of the constellation Lepus, about 100 million light years away) by Berto Monard in South Africa. (Credit: NAOJ)

The Mystery of Supernovae

Stars heavier than eight solar masses will end their lives with a brilliant explosion called a "supernova". A supernova ejects elements synthesized within its star that are heavier than hydrogen and helium, the main elements of the primeval Universe. The ejection of these heavier elements into interstellar space has enriched the chemical composition of the Universe.

Despite its important role in the evolution of the Universe, the process of how supernovae explosions occur has been unclear. Based on recent numerical simulations, researchers agree that supernovae would not succeed as one-dimensional, spherical events and that multi-dimensional effects are important for understanding their occurrence. Scientists have proposed two main scenarios to explain how supernovae explosions occur: (1) a bipolar explosion facilitated by rotation, and (2) a clumpy 3D explosion driven by convection. However, scientists have not known which scenario is more plausible, because they have not actually observed the shape of supernovae.

Seeing the "Shape" of Supernovae by Polarization

Although it would seem easy to see the shape of supernovae by simply taking a picture of them, observing them is really a very challenging task. Since most supernovae occur in galaxies millions or hundreds of million light years away, they only look like a point, even though they expand at a speed of 10,000 km/s.

The current research team used a special method of detection to reveal the shape of supernovae; they measured so-called "polarization", which supplies information about the direction of vibrating electromagnetic waves. They performed numerical simulations for emissions from supernovae and found clearly different polarization patterns for clumpy and bipolar explosions. An object shows various angles of polarization in a clumpy explosion while it shows a single angle of polarization in a bipolar explosion (Figure 2). 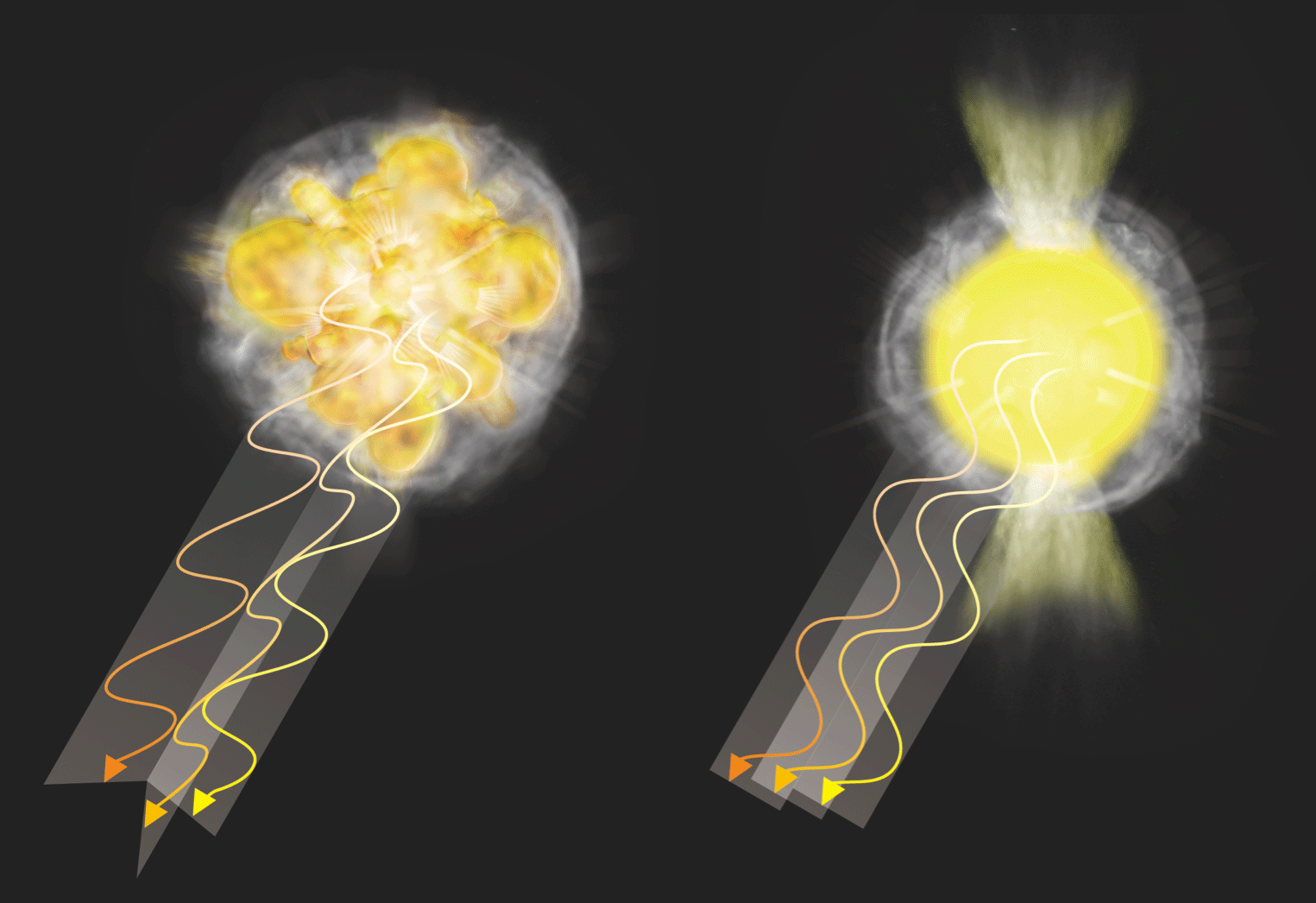 Based on hypotheses derived from their simulations, the group used the Subaru Telescope's Faint Object Camera and Spectrograph (FOCAS) to conduct polarimetric observations of nearby supernovae; such observations measure the intensity and direction of polarization. Because the researchers did not know when the supernovae would appear, they could not assign an observing time in advance. Fortunately, Subaru Telescope has a Target of Opportunity (ToO) mode that overcomes this difficulty and enables a dynamic allocation of the observing time. Thanks to this mode, the team succeeded in conducting polarimetric observations of two so-called "stripped-envelope supernovae" (SN 2009mi and SN 2009jf), which do not have hydrogen surrounding them and are the best targets for studying explosion geometry.

The team detected the polarization from the two supernovae, which clearly indicated that the supernovae are not usually round. They also found that each supernova had various angles of polarization, a finding consistent with the scenario of a clumpy 3D explosion (Figure 3).

Figure 3: Observed polarization around a calcium absorption line of SN 2009jf as a function of velocity caused by expanding motion (Doppler velocity). It shows that the polarization angle changes with wavelength. (Credit: NAOJ)