Discovery of the Most Distant Galaxy in the Cosmic Dawn

A team of astronomers led by Takatoshi Shibuya (The Graduate University for Advanced Studies, Japan), Dr. Nobunari Kashikawa (National Astronomical Observatory of Japan), Dr. Kazuaki Ota (Kyoto University), and Dr. Masanori Iye (National Astronomical Observatory of Japan) has used the Subaru and Keck Telescopes to discover the most distant galaxy ever found, SXDF-NB1006-2, at a distance of 12.91 billion light years from the Earth. This galaxy is slightly farther away than GN-108036, which Subaru Telescope discovered last year and was the most distant galaxy discovered at the time (Note 1). In addition, the team's research verified that the proportion of neutral hydrogen gas in the 750-million-year-old early Universe was higher than it is today. These findings help us to understand the nature of the early Universe during the "cosmic dawn", when the light of ancient celestial objects and structures appeared from obscurity.

Astronomers think that the our Universe began 13.7 billion years ago at the Big Bang. The exteme temperature and density of this fireball decreased rapidly as its volume increased. Hot cosmic plasma composed mainly of protons and electrons recombined to form neutral hydrogen atoms within 380,000 years after the Big Bang; this was the beginning of the cosmic "dark age." From then on, the gas continued to cool and fluctuated in density. About 200 to 500 million years after the Big Bang, the dense parts of neutral hydrogen clouds contracted under their own gravity, and the first stars and galaxies formed. The radiation from this first generation of stars started to heat and reionize the hydrogen in nearby space, eventually leading to the reionization of the entire Universe. This was the era of "cosmic reionization" (Figure 1) or the "cosmic dawn". The current team focused their research on identifying the exact epoch of the cosmic dawn in an effort to answer major astronomical questions about the history of our Universe. 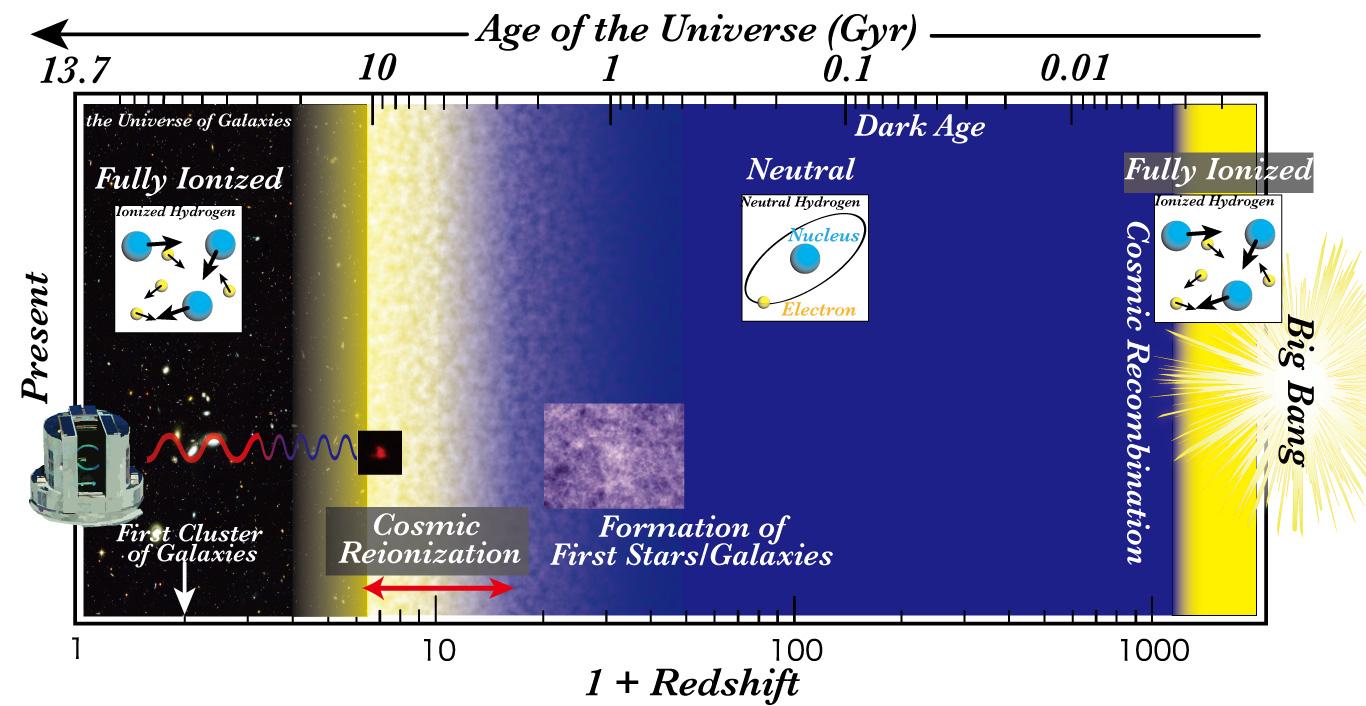 Figure 1: Cosmic history from the Big Bang to the present. (Credit: NAOJ)

How did the team design research to explore such an ancient, extremely distant time? Their first steps were to conduct a survey of distant galaxies and measure their number and brightness. Because light from the distant Universe takes time to reach the Earth, identification of more distant galaxies allows astronomers to trace farther back in time and locate the epoch of the cosmic dawn. However, neutral hydrogen in intergalactic space dimmed the light from galaxies before the cosmic dawn and made them more difficult to observe. Because the team needed to search a vast area for objects in the far distant Universe (Note 2), they used the prime focus camera mounted on the Subaru Telescope (Suprime-Cam) for their initial surveys. Suprime-Cam captures images of objects in a wide field of view from the large, 8.2 m primary mirror of the Subaru Telescope and is well-known for discovering faint, far distant galaxies and then measuring the amount of neutral hydrogen in the early Universe (Note 3). The use of Suprime-Cam was even more compelling with the 2008 installation of new detectors with a sensitivity about twice as high as their predecessors, particularly in the red wavelengths (Note 4).

Armed with the most sensitive eyes in the world, the researchers could carry out surveys for extremely distant galaxies (beyond redshift 7, where the majority of energy output from galaxies is detected in red wavelengths). To fine-tune their survey even more, a team led by Dr. Iye constructed a new special filter named NB1006 through which they could selectively identify the light of distant galaxies at a redshift of nearly 7.3.

The team used Suprime-Cam, complete with its new, highly sensitive detectors, attached the NB1006 filter to observe two specifically designated regions of the sky for detailed study: the Subaru Deep Field and the Subaru XMM-Newton Deep Survey Field. After a total of 37 hours in 7 nights of observations in these wide fields, the team carefully processed the images they had obtained. Shibuya measured the color of 58,733 objects in the images and identified four galaxy candidates at a redshift of 7.3. A careful investigation of the brightness variation of the objects allowed the team to narrow down the number of candidates to two.

Then it was necessary for the team to make spectroscopic observations to confirm the nature of these candidates. They observed the two galaxy candidates with two spectrographs, the Faint Object Camera and Spectrograph (FOCAS) on the Subaru Telescope and the Deep Imaging Multi-Object Spectrograph (DEIMOS) on the Keck Telescope, and identified one candidate for which a characteristic emission line of distant galaxies could be detected.

The current team found that the proportion of neutral hydrogen was increasing in the far distant Universe. They concluded that about 80 percent of the hydrogen gas in the ancient Universe, 12.91 billion years ago at a redshift of 7.2, was neutral.

In sum, this careful research plan and procedures, including the appropriate removal of contaminations that could lead to false results, resulted in the successful discovery and confirmation of the most distant galaxy ever discovered: SXDF-NB1006-2 (Figures 2 and 3). In addition, the findings gave the team confidence that they were observing an object during the last phase of the cosmic dawn. 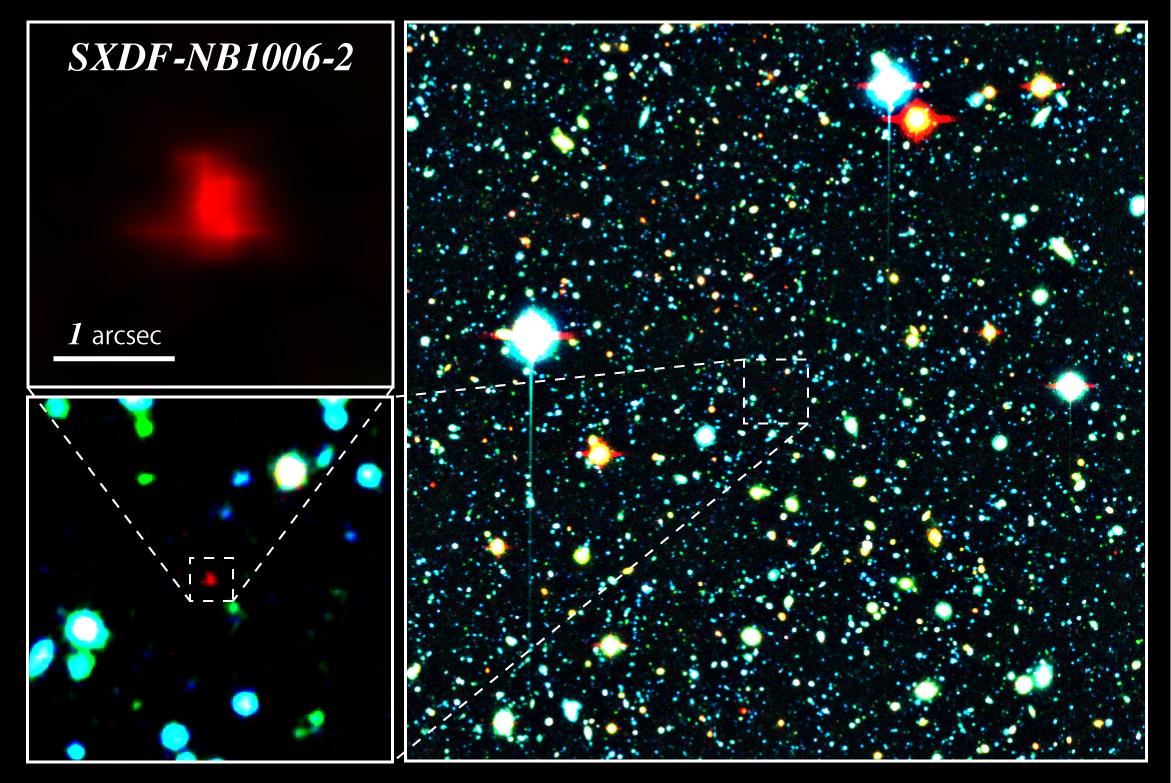 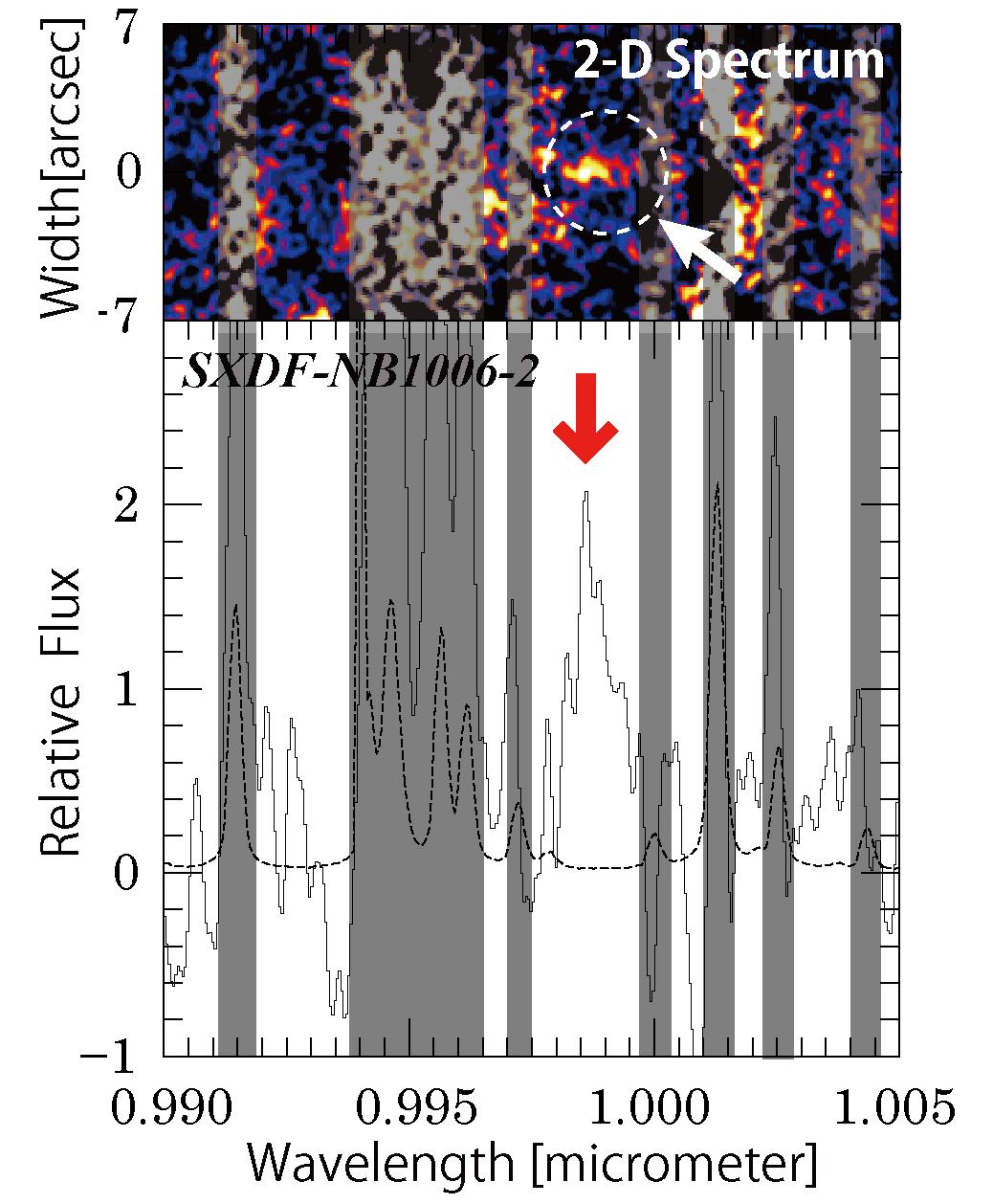 Figure 3: One- and two- dimensional spectra of SXDF-NB1006-2 obtained with the spectrograph DEIMOS on the Keck Telescope. The red arrow points to a spectral line (the asymmetric Lyman-alpha line) that strongly supports the identification of the the galaxy in the ancient Universe. The grey shaded area covers the wavelength range heavily contaminated by night-sky emission lines of hydroxyl (OH). (Credit: NAOJ)

Although finding just one galaxy at a critical epoch is exciting by itself, it is not a sufficient sample to characterize the entire epoch. Precise measurement of the number of galaxies during the cosmic dawn requires surveys of even wider fields. The scheduled 2012 installation of Subaru's new instrument, Hyper Suprime-Cam (HSC) will allow researchers to observe a field of view seven times greater than that of Suprime-Cam and opens the door to a huge galaxy sample beyond redshift 7. Observations with HSC are steps in the direction of uncovering the dark periods of the Universe and understanding the physical properties and formation of the first stars and galaxies. Shibuya summarized the team's future intent and hopes: "By conducting an extremely wide HSC survey for distant galaxies beyond redshift seven, we will find the mechanisms of the cosmic reionization in a variety of ways, not just by investigating their number and brightness." Dr. Iye, the leader of the Thirty Meter Telescope (TMT) project at the National Astronomical Observatory of Japan (NAOJ), added, "We have been pushing the limits of 8-10 m class telescopes to detect distant galaxies. The 30 m mirror of the TMT will be able to gather up to ten times more light than current large telescopes and detect faint light from galaxies up to a redshift of 14. The day is not so far off when the mysteries of the dark ages of the Universe and the physical properties of the first galaxies will be revealed."

Table 1: Distance ranking of galaxies that were confirmed by precise calculations from spectra in spectroscopic observations. (Credit: NAOJ)

1. GN-108036 is the galaxy at redshift 7.213 discovered in an observation described in
"Discovery of a Vigorous Star-Forming Galaxy at the Cosmic Dawn"
2. The galaxy populations that emit Lyman Alpha emission lines are those that enable investigations of the proportion of neutral hydrogen in the early Universe.
3. For more information on the discovery of objects in the ancient Universe, go to descriptions in
"Cosmic Archeology Uncovers the Universe's Dark Ages"
4. A more detailed explanation of the new CCDs is in a press release labeled
"Suprime-Cam Upgraded with Ultra-Sensitive CCDs"