A team of astronomers led by David Sobral (Leiden Observatory and Royal Observatory of Edinburgh) has explored the synergies between the Subaru Telescope and the United Kingdom Infra-Red Telescope (UKIRT) to locate numerous distant galaxies in the ancient universe and investigate their star formation activity. By combining narrow-band filter (Note 1) observations from both the Subaru Telescope and the UKIRT, the team has been able to obtain clean panoramic maps of parts of the distant universe about 9 billion years ago. This dual mode of surveying faint galaxies provides a powerful technique for selecting and studying star-forming galaxies during their formation and evolution.

Astronomers rely on detailed observations of astronomical objects outside of our own Milky Way Galaxy to understand how galaxies developed into what they are today. By comparing the properties of galaxies at different ages of the Universe, scientists can investigate their formation and evolution. However, current samples of the distant Universe lack the size and volume to answer such questions as: When was the peak of galaxy formation activity? Which physical processes propelled such activity? The current research team has developed and applied a technique for overcoming some common problems: a) missing many galaxies by looking at only one emission line and b) contamination of findings by less accurate measurements of galaxy distance and properties.

The dual-line technique takes advantage of a unique combination of the capabilities of the 8.2 m Subaru Telescope and the 3.8 m UKIRT to view very distant galaxies over wide areas. The combined Subaru-UKIRT survey uses two filters-- a narrow-band filter on the Subaru Telescope to look for oxygen emission lines (Note 2) and another narrow-band filter on UKIRT to look for hydrogen emission lines-- and yields a panoramic view of the distant universe about 9 billion years ago that one survey alone could not provide. Team leader Sobral explains the technique: “We are looking at the same process(es), i.e., star formation activity, through two different perspectives, which greatly expands our view of what is going on in these distant galaxies. It’s similar to listening to stereo music with earphones. If we listen with just one earphone, we won’t hear part of the vocals/instruments. Only when we use two earphones can we fully appreciate the complete range of sounds.” 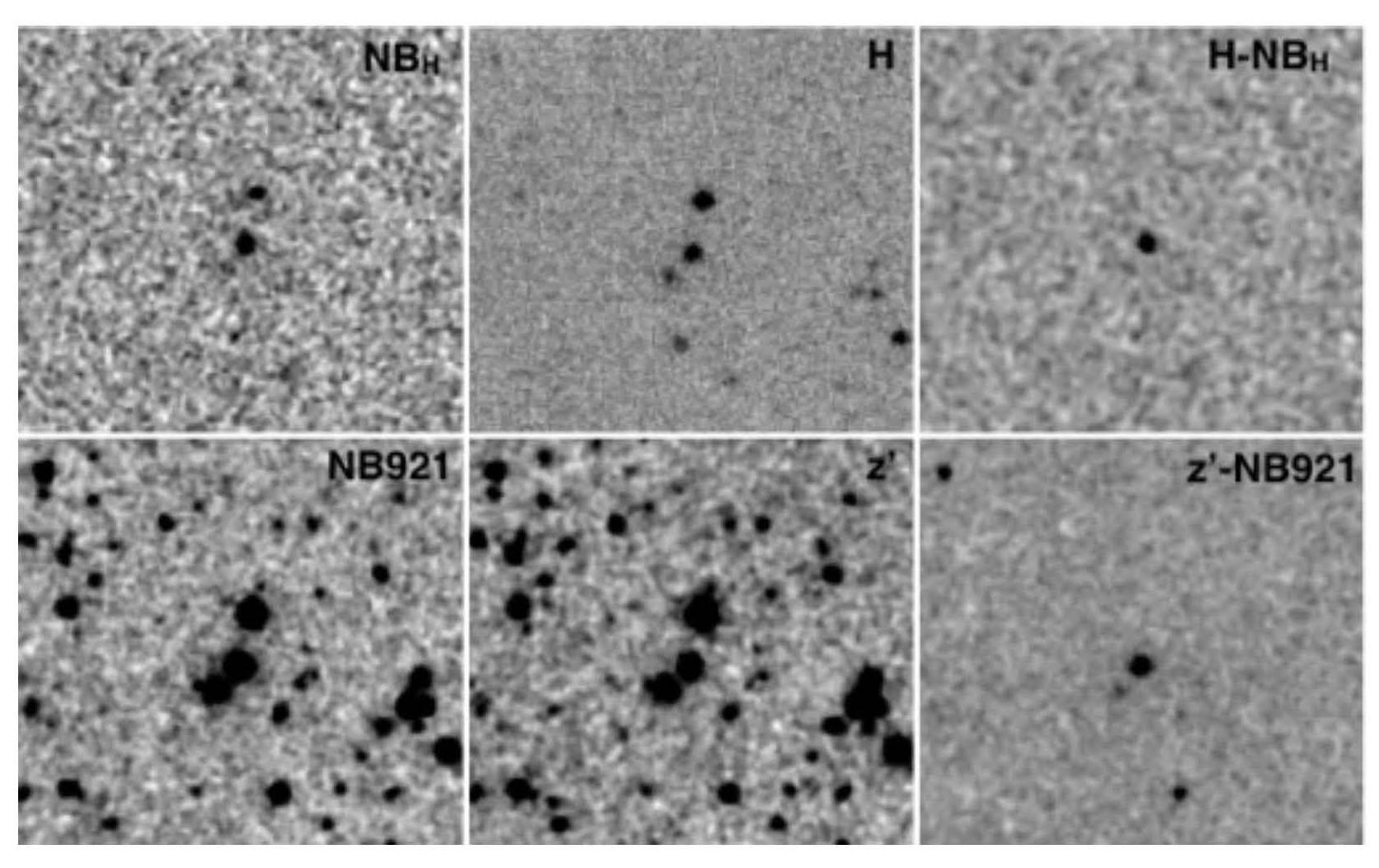 Figure 1: An example of how the dual narrow-band technique works. UKIRT images (top) are obtained with a narrow- (left) and a broad-band filter (middle), and, after subtraction, a galaxy with an emission line (right) is identified. Subaru images (bottom) are obtained with different narrow- and broad-band filters, and the same procedure is followed. Galaxies with emission lines in both data sets are automatically confirmed to be galaxies forming stars at a distance of about 9 billion light years away.

The team found 190 distant galaxies seen simultaneously through their hydrogen and oxygen lines and has been able to derive how much star formation was occurring in the universe 9 billion years ago and compare that with other studies. The results reveal that the overall population of star-forming galaxies has been continuously decreasing their star formation activity for the last 11 billion years. 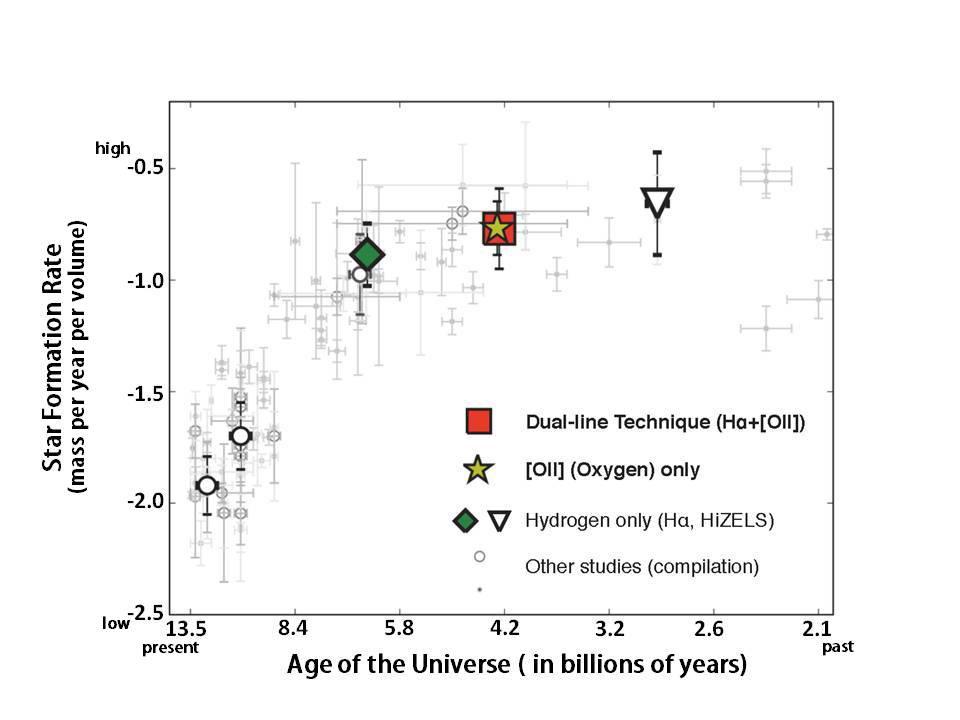 The findings from this research also contribute greater details to our general understanding of how galaxies form and evolve. For the first time, they allow a comparison of dust extinction (i.e., the amount of light absorbed by dust) affecting typical star-forming galaxies today and those that existed 9 billion years ago. Contrary to past assumptions, dust extinction has similar effects on both distant young galaxies, which are much more active, and local ones. This result is very important for accurate measurement of star formation rates at early epochs in the Universe.