An international team of scientists led by David Martinez-Delgado (Max Planck Institute for Astronomy, Germany) has conducted research that reveals a "stealth merger" of dwarf galaxies, where an in-falling satellite galaxy is nearly undetectable by conventional means yet has a substantial influence on its host galaxy. Aaron Romanowsky (University of California Observatories in Santa Cruz) along with graduate student Jacob Arnold (UCSC) used the Subaru Telescope to obtain high-resolution images of individual stars in a dense stream of stars in the outer regions of a nearby dwarf galaxy (NGC 4449); these outlying stars are the remains of an even smaller companion galaxy in the process of merging with its host (Figure 1). NGC 4449, the host galaxy, is the smallest primary galaxy in which a stellar stream from an ongoing merger has been identified and studied in detail. Romanowsky commented, "I don't think I'd ever seen a picture of a galaxy merger where you can see the individual stars. It's really an impressive image." 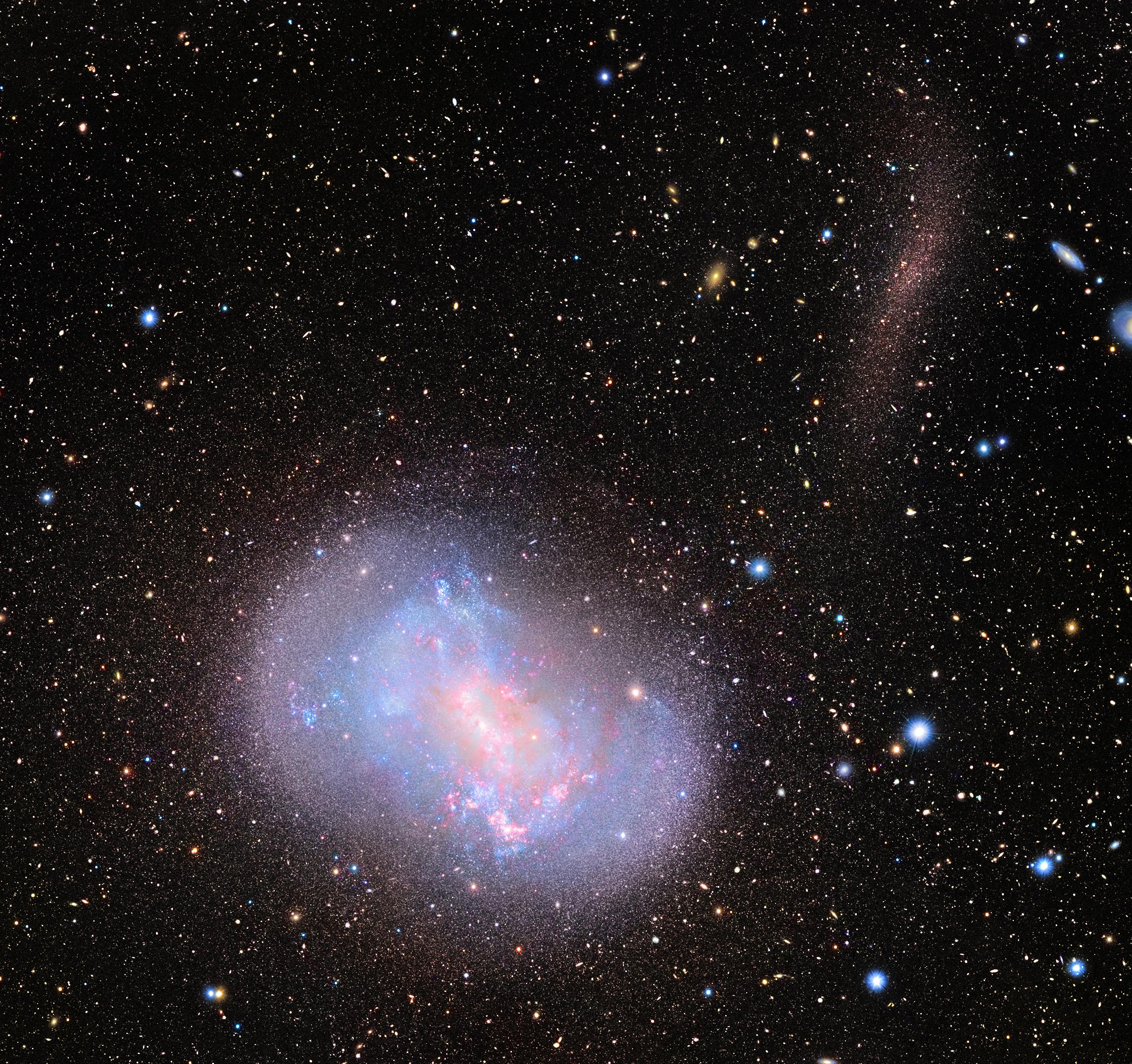 Figure 1: Suprime-Cam captured this image of the nearby dwarf galaxy NGC 4449 (lower left) and its companion (upper right), a dwarf galaxy that has been gravitationally pulled apart into a stellar stream. It shows individual stars composing the galaxies. R. Jay GaBany (Blackbird Observatory) produced the composite: blue hues in the center of the larger galaxy are brought about by a burst of recent star formation, while the red in its periphery and in its satellite indicates the presence of older, red-giant stars. [Credit: NAOJ and R. Jay GaBany]

Martinez-Delgado organized a campaign to follow up on an initial report of the stellar stream in NGC 4449, first detected by Russian astronomers as a mysterious, faint smudge in digitized photographic plates from the Digitized Sky Survey project. Had the objects been slightly fainter, more diffuse, or farther from the host galaxy, the stellar stream could easily have been missed. NGC 4449 is located 12.5 million light years from Earth and is a member of a group of galaxies in the constellation Canes Venatici. Martinez-Delgado recruited astrophotographer R. Jay GaBany (recipient of the 2010 AAS Chambliss Amateur Achievement Award) to obtain deep, wide-field images with the half-meter telescope at Black Bird Observatory; these images confirmed the presence of a faint substructure in the galaxy's halo. Romanowsky and Arnold then took advantage of the wide field of view and light collecting power of Subaru Telescope's 8.2 meter mirror and its prime focus camera (Suprime-Cam) to capture high resolution images of the faint objects in the halo. These final observations at Subaru in 2011 clearly showed the stealth merger of two dwarf galaxies.

Modern cosmological theory posits that large galaxies were built up from smaller ones through an orderly succession of mergers. Although astronomers have observed many mergers involving massive galaxies, it has been difficult to find mergers of two dwarf galaxies. Theory suggests that similar processes of merging should occur on a smaller scale, with small galaxies eating even smaller ones; this is how galaxies grow. Romanowsky commented on the significance of the Subaru image: "Now we have this beautiful image of a dwarf galaxy consuming a smaller dwarf. You can see a smaller galaxy coming in and getting shredded, eventually leaving its stars scattered through the halo of the host galaxy. "

The new observations support the idea that the stellar halos around many dwarf galaxies are the remnants of smaller satellites that were shredded in past merger events. The ongoing merger in NGC 4449 may also be responsible for the intense burst of star formation seen in the galaxy. "This galaxy is famous for its starburst activity, and it seems we've found the reason for that. The gravitational interaction with the incoming galaxy has probably disturbed the gas in the main galaxy and caused it to start forming stars," Romanowsky said.

The paper describing the research, “Dwarfs gobbling dwarfs: A stellar tidal stream around NGC 4449 and hierarchical galaxy formation on small scales”, will be published in Astrophysical Journal Letters. Coauthors of this international study include: