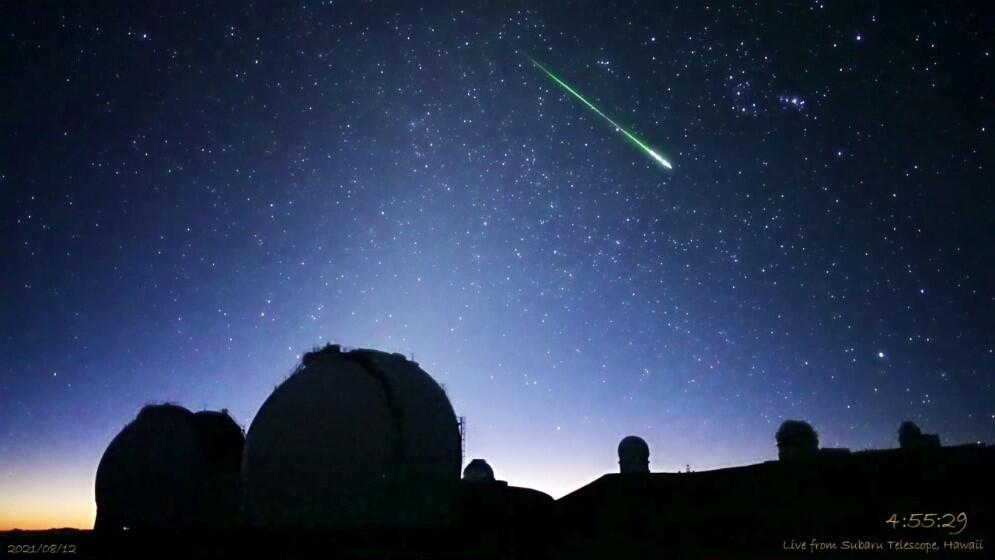 Figure 1: A Perseids fireball flying over the Maunakea observatories. This view was captured by the Subaru-Asahi Sky Camera in the early morning of August 12, 2021 (Hawai`i Time: HST). Note that the time difference between HST and UT is -10 hours. The faint glow on the sky rising up from the largest dome (W. M. Keck Observatory) near the center is the zodiacal light (a glow caused by sunlight scattering off an interplanetary cloud of tiny dust particles). (Credit: Subaru Telescope, National Astronomical Observatory of Japan, and Asahi Shimbun Company)

The Perseid Meteor Shower is one of the most famous annual astronomical events, and this year it reached its peak activity in the morning of August 12 here in Hawai`i. Many people around the world enjoyed a great view of the event without interference from moonlight.

Subaru Telescope’s "Subaru-Asahi Sky Camera" (Note 1) also had many viewers from all around the world for the nights of the Perseid Meteor Shower’s peak activity. According to the Asahi Shimbun Company, our partner for this live streaming camera project, we had more than 10,000 simultaneous connections, and the total number of views reached close to 300,000 in a single night. Just two nights’ streaming events (August 12 to 13) gathered more than 500,000 views. We really appreciate all the viewers who visited our live stream.

There was an unexpected "bonus" to this year's Perseid Meteor Shower. Two days after the peak activity day, starting around 10 p.m. on August 13 (Hawai`i time), an unexpected number of Perseids meteors began to appear in the camera field of view. This was an event that no one had predicted.

Soon, meteor observers' networks around the world began to receive reports of the sudden high activity of the Perseids. For meteor researchers in Japan, the live feed from the Subaru-Asahi Sky Camera served as a useful tool to catch the situation soon after they received reports of the outburst.

More than 150 meteors were recorded by the viewers of our live camera from around 10 p.m. on that day to 1 a.m. on the next day. Also, it soon became clear that the number of recorded meteors was more than twice as many as the previous day's tally from the viewers' observations, contributing to the evaluation of the strength of the Perseid outburst.

Dr. Mikiya Sato, a meteor expert at the National Astronomical Observatory of Japan (NAOJ), commented on this sudden appearance, "In the Perseid Meteor Shower, an increase in the number of appearances due to dust trails has been observed from time to time, but this sudden appearance was completely unexpected and cannot be explained by the usual dust trails ejected from the parent comet over the past 2000 years. We believe that this is a very important observation that will lead to new research on the formation of this meteor shower."

There was actually another "eye" which recorded the Perseid Meteor Shower from Maunakea. A new high-sensitivity all-sky camera was installed at the Subaru Telescope in July and had begun test operation. The purpose of this camera is to monitor weather conditions during night observations. However, the camera can also capture interesting celestial events such as bright meteors. The Perseid Meteor Shower, including the sudden event on August 13, was nicely captured in the test data from this all-sky camera.

While the Subaru-Asahi Sky Camera captures a part of the sky with high sensitivity, the All-Sky Camera is suitable for observing bright meteors across the entire sky. In this sense, the two cameras have good synergy and are expected to help elucidate the true nature of this mysterious Perseid outburst.

We are preparing a public-release website for the nightly time-lapse movies of the sky generated by this all-sky camera, hoping to share the "world's best night sky" over Maunakea with everyone in Hawai`i and the world. Please watch for it.

Note 1: The "Subaru-Asahi Sky Camera" is a joint project of Subaru Telescope, NAOJ, and the Asahi Shimbun Company. If you wish to use it for press purposes, please credit "Provided by NAOJ and Asahi Shimbun."