A new Core-to-Core Program, entitled "International research network toward the era of deep and wide near-infrared surveys of the Universe with space and ground-based telescopes" led by Prof. Michitoshi Yoshida, the Director of Subaru Telescope, has been approved by the Japan Society for the Promotion of Science (JSPS) as a 5-year program (April 2021-March 2026). Under this program, JSPS will support our science collaboration between Japan, US, France, Australia, and Taiwan. 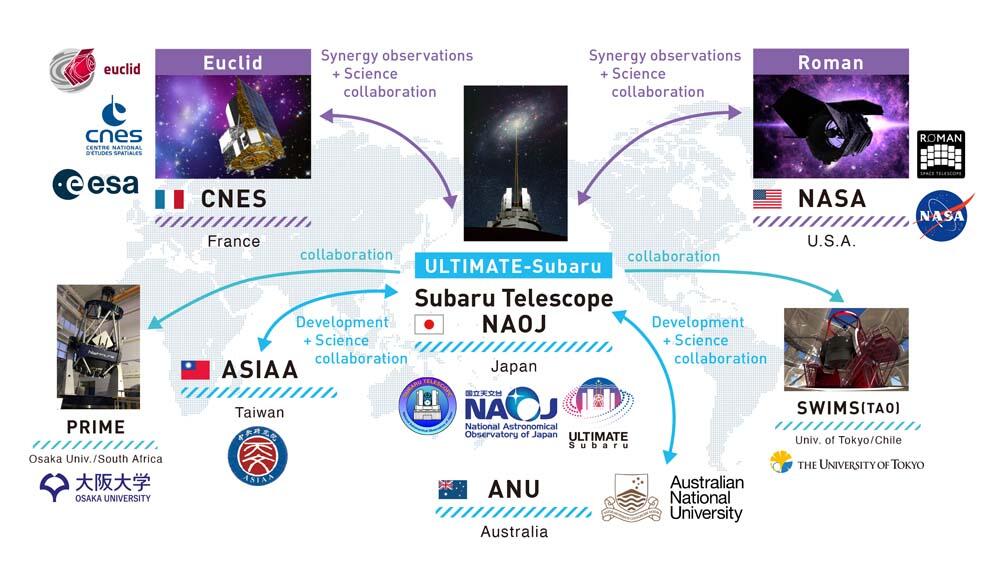 How big is the Universe? What did the first stars and galaxies look like? Astronomical observations at near-infrared wavelengths are critical to answer these questions by setting new records for observations of high-redshift objects. Currently, there are a number of ambitious projects around the world to launch space telescopes and to build ground-based telescopes/instruments to perform deep and wide-field observations in the near-infrared, all of which are expected to revolutionize our understanding of the Universe in the late 2020s.

Dr. Yusei Koyama (Project Scientist of ULTIMATE-Subaru), one of the leading scientists of this Core-to-Core Program, says, "The approval of this program is a very important step for the ULTIMATE-Subaru project, as well as the future of Subaru Telescope. We are very proud that many top-level scientists around the world are enthusiastic about collaboration with the Subaru Telescope."

This Core-to-Core program also aims to foster collaboration with the PRIME telescope (in South Africa, to be operated by Osaka University) and the SWIMS instrument on the TAO telescope (in Chile, to be operated by the University of Tokyo), both of which have wide-field observational capabilities in the near-infrared. This project is named "SUPER-IRNET," an acronym made by taking the first letter of the names of the five key projects mentioned above – "S"WIMS, "U"LTIMATE, "P"RIME, "E"uclid, and "R"oman. This SUPER-IRNET also plans to organize several workshops/conferences, to encourage interaction particularly between young scientists in the five countries to build a basis for future, long-term collaboration. In these ways, the Subaru Telescope is now expected to play a leading role in the new era of optical-infrared astronomy.