The two most recent additions to the Subaru Telescope, including PFS's first fiber cable, have enabled the Prime Focus Spectrograph (PFS), one of the next-generation facility observational instruments to be mounted on the Subaru Telescope, to observe the night-sky spectra for the first time.

PFS is an international collaboration led by the Kavli Institute for the Physics and Mathematics of the Universe, which aims to uncover the nature of dark matter and dark energy by studying the spectra of light from distant objects in the Universe. 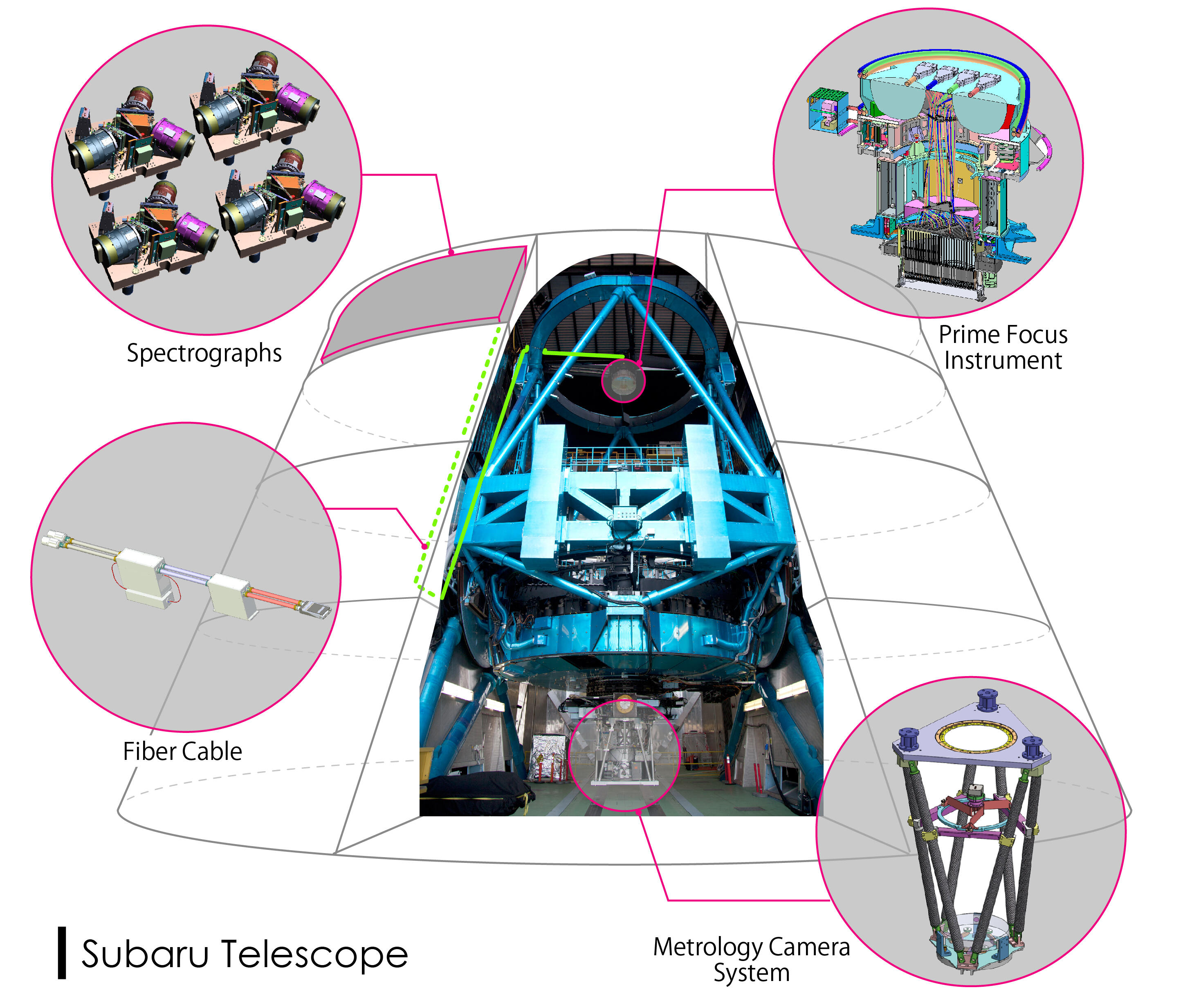 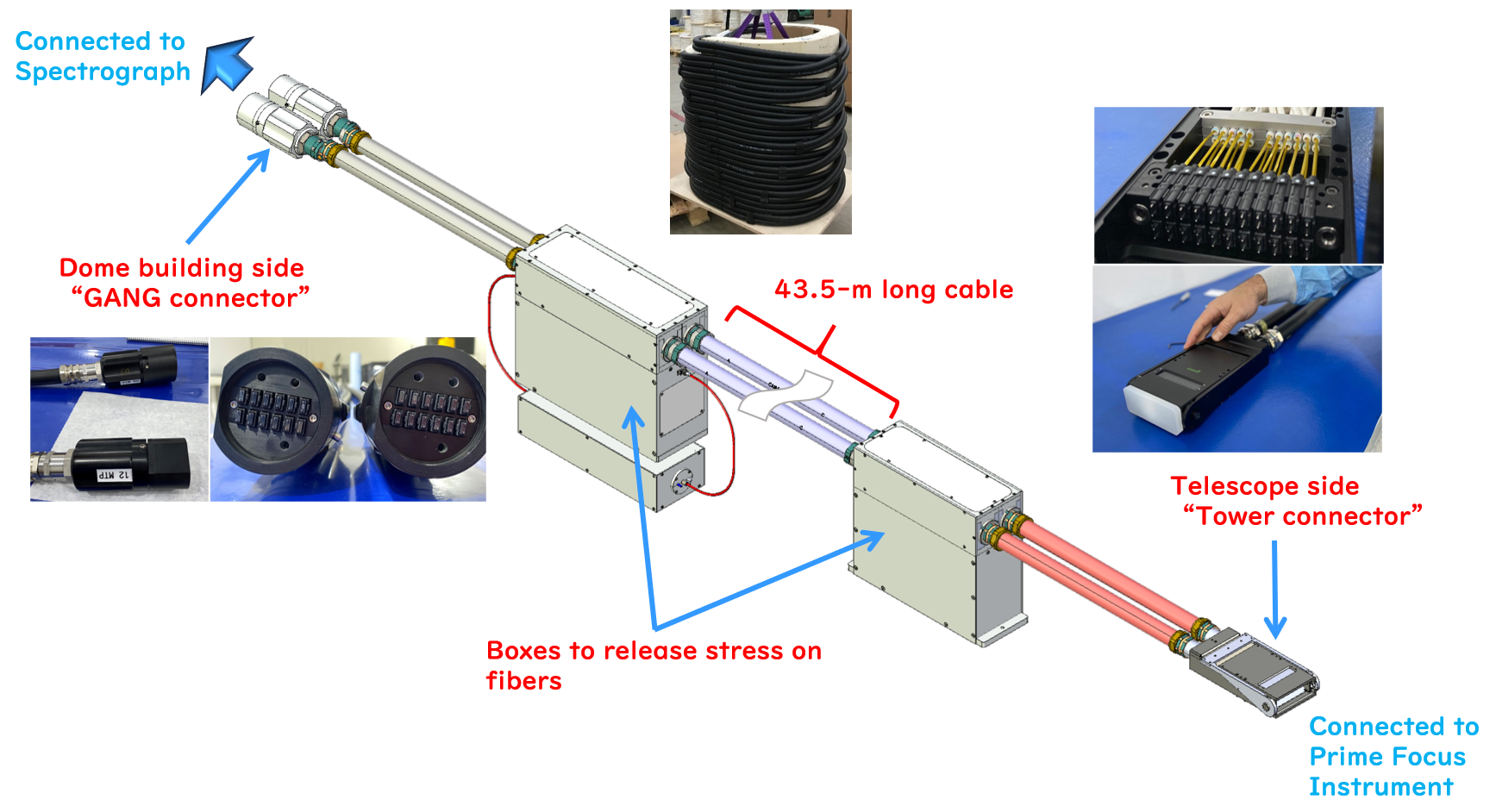 Then, on February 11, a small telescope called the Subaru Night-Sky Spectrograph (SuNSS) with a 4 cm aperture, was attached to the spider part of the Subaru Telescope (Figure 3). With the installation of SuNSS and the fiber cable, the PFS spectrometer was able to capture the spectrum of the night-sky for the first time (Figure 4). 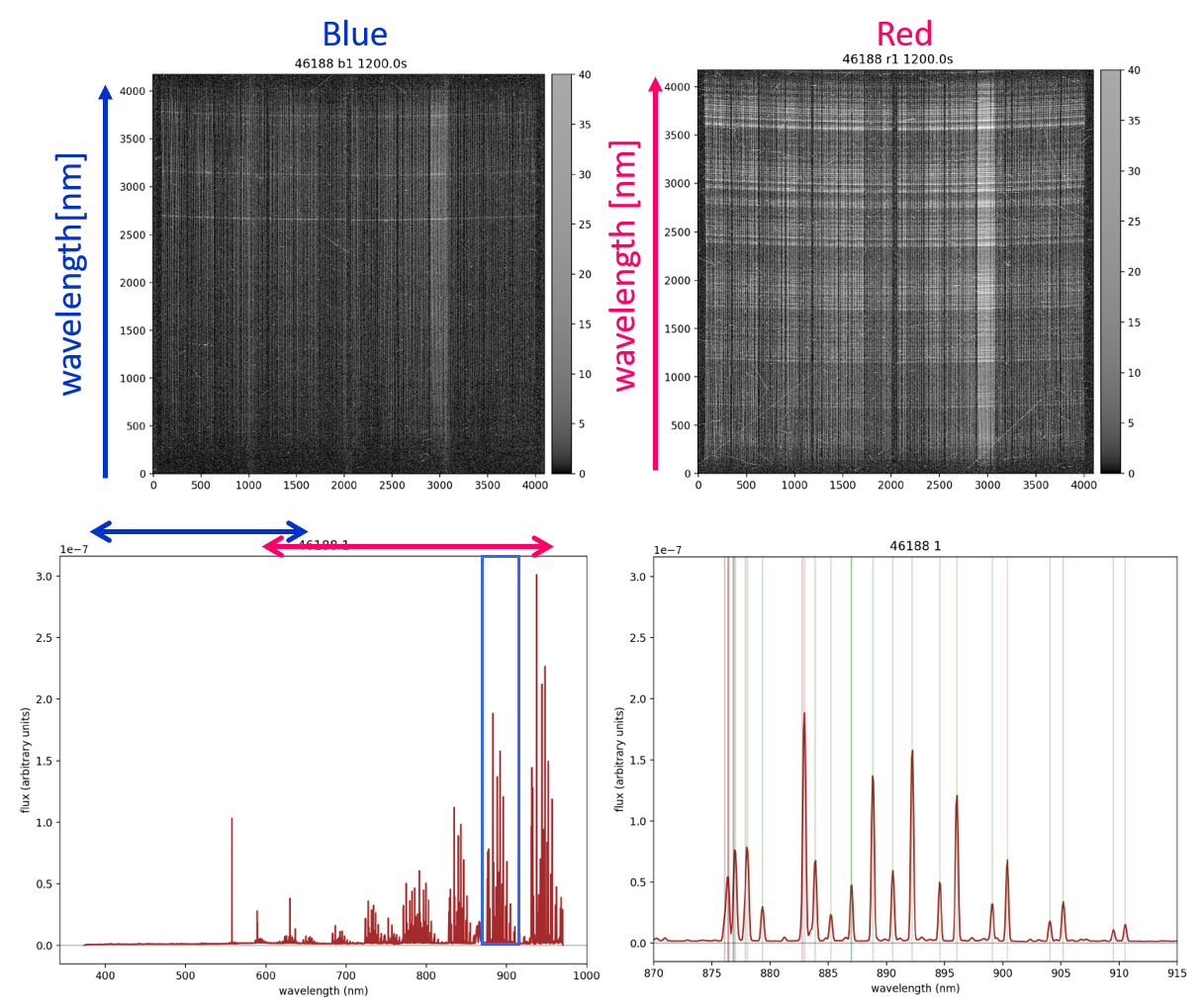 Figure 4: Spectrum of the night-sky acquired by the first spectrograph module with SuNSS. (top) Original images from the two CCD detectors inside the spectrograph, the blue camera and the red camera. (bottom left) The combined spectrum extracted from the two images. The series of peaks are due to emission from the OH (hydroxyl) molecule in the upper atmosphere. The vertical axis is uncalibrated brightness. (bottom right) An enlarged spectrum of the wavelength range of 870 to 915 nanometers (marked in blue in the lower left figure). The green lines show the expected wavelengths of the OH molecule. (Credit: PFS Project)

The fiber cable unit was first assembled in the United Kingdom, and finished and tested by the National Astrophysical Laboratory of Brazil (LNA).

The team will continue making observations, and use the acquired data to advance the development of software to be used for data analyses, and to prepare for engineering observations using the light from the Subaru Telescope.

The PFS project is expected to start scientific observations from 2023.


What is the Prime Focus Spectrograph
The Prime Focus Spectrograph (PFS) is an instrument currently being developed, which will be mounted on the 8.2 m Subaru Telescope on Maunakea in Hawaiʻi. The instrument splits up the light from celestial objects, such as stars and galaxies, into the various component wavelengths. The resulting data set is called a "spectrum," and can be used to study various details of a celestial object, such as its motion.

The PFS will be capable of collecting spectra from ~2400 celestial objects at once.

Sub-components and sub-systems of PFS are being built, assembled, and tested in the US, France, Brazil, and Taiwan, before being shipped to the Subaru Telescope. It is aiming to start scientific operation in 2023.