It's not often that observers can catch a view of the Large Magellanic Cloud (LMC) from the northern hemisphere, but that's exactly what veteran Subaru Telescope support astronomer Ichi Tanaka did on February 12, 2017. For Tanaka, it was a truly awe-inspiring experience and he marveled at his good fortune in being able to photograph the sight with a single lens reflex camera. 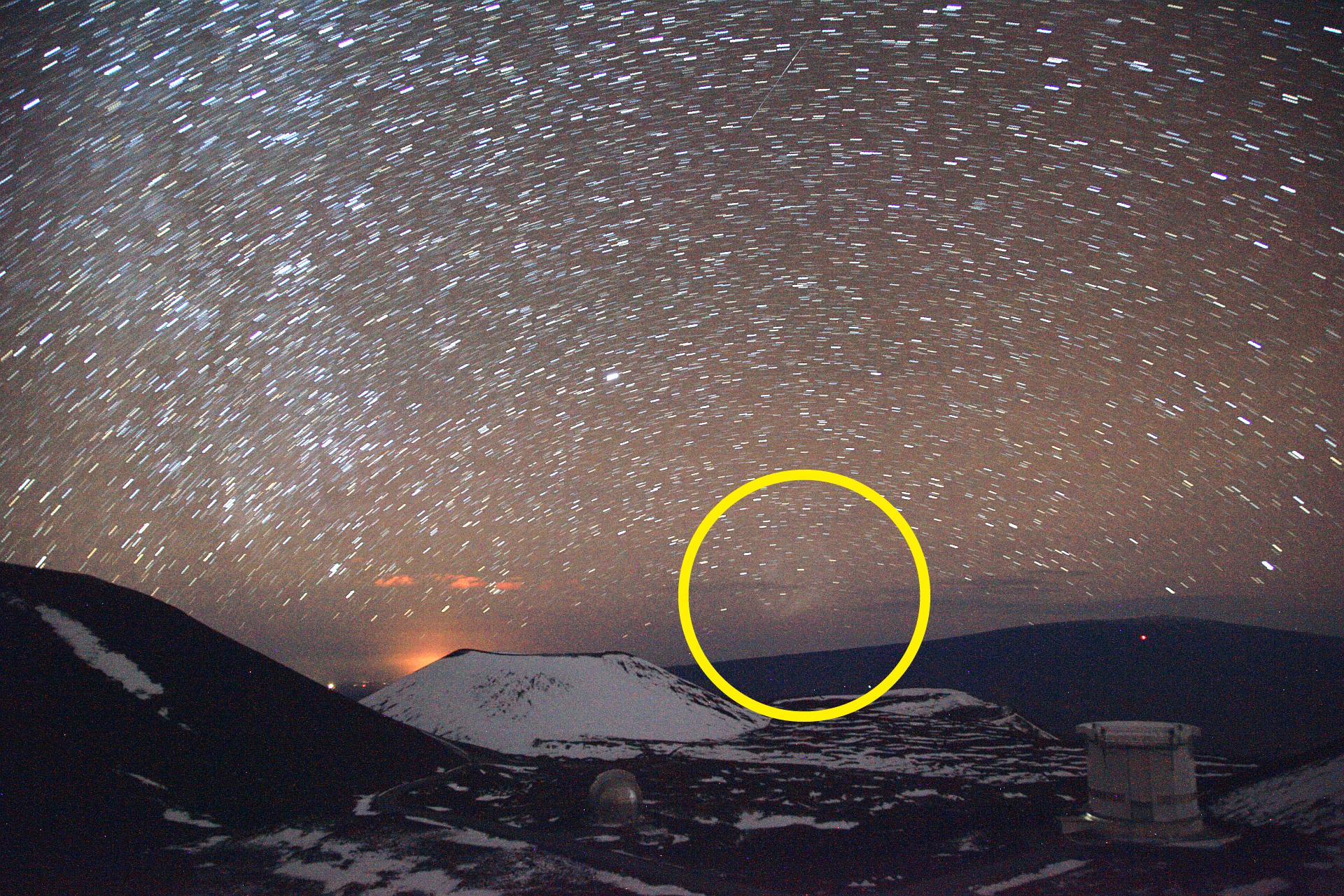 Figure: The Large Magellanic Cloud (LMC) photographed from the top of Maunakea. It appeared at very low elevation toward south slightly above the flanks of Mauna Loa in this image taken on February 12, 2017. In the front is a snow-capped pu'u (cinder cone). The red glow to the left (east) comes from lava lake of Kilauea volcano's summit crater. Image without circle is here. (Credit: NAOJ/Ichi Tanaka)

"The island of Hawaii is the southernmost part of the country," he said. "Thanks to the clear sky over Maunakea, I was able to take this photo of the LMC, which appears at less than one degree of elevation. Its size is larger than I expected. When the Moon rose, it washed out the faint light of the LMC."

Catching the Large Magellanic Cloud from Hawai'i is Tricky

Even though it is referred to as a "Cloud", the Large Magellanic Cloud is actually a companion galaxy to our Milky Way Galaxy, and is visible to naked eyes if you are at the right location. Since it lies deep into the Southern Hemisphere sky at declination -69.76 degrees, it's not visible from Japan or many other populated areas in the northern hemisphere. The Hawaiian islands lie about 20 degrees north latitude, just far enough south that the LMC can be seen scraping the horizon during part of the year. It's considered very difficult to photograph from Hawai'i.

There are two cameras that helped Tanaka to have this image, one that aided him spot the LMC, and the other that took the photograph. Earlier in the month, he was checking the sky condition through a cloud monitor camera and noticed a faint smudge of light low along the southern horizon. With a quick search, he realized that the location is where the LMC is. He felt fortunate to see it and left at that.

One has to be at high altitude with dark-enough skies and clear air to be able to photograph an object at low elevation. For this observation run, he checked the moon phase, the location of the object, and brought a set of equipment. The Moon was still large, but it was to come up right after the LMC passes meridian. And the low part of the sky was clear enough - which is not always the case especially toward the east side of Mauna Loa. There can be thick volcanic smog from Kilauea area, as one can see a glimpse of it in this image. Tanaka set up a single lens reflex camera toward the smudge and able to utilize the dark hours to capture series of images of the LMC.

In the image it shows up at a very low elevation, almost scraping the flanks of Mauna Loa. That makes it too low to be observable by Subaru Telescope. Very detailed studies of this galaxy come from telescopes in the Southern Hemisphere or from space-based observatories.