Sometimes a celestial event occurs right before an astronomer's eyes. That was the case for astronomer Ichi Tanaka at the Subaru Telescope on the night of September 20th, when he was surprised by the flare of something in the sky. It showed up in an all sky image taken from the top of Maunakea. Was that a Cheshire Cat carving a brilliant smile up in the sky? Tanaka quickly checked images from other cameras. There it was, a trace of a flash in the view from a second camera. What caused this brilliant flare? It turns out that the fireball he saw was a piece of solar system rock, zipping through Earth's atmosphere and burning up.

Astronomers often see meteors from the mountain, but a brilliant fireball is a rare occurrence. During the course of night observations, astronomers monitor sky conditions utilizing images from sky and/or cloud monitor cameras on Maunakea. Mauna Kea Weather Center's website has links to those images. Sometimes an astronomer needs to change observation targets when cloud cover hides access to parts of the sky. In order to choose another target that isn't hidden by clouds, they examine images from the all-sky cameras.

On the night Ichi Tanaka spotted evidence of a fireball, the sky was dark before the 70% illuminated Moon rose. Ichi was checking sky conditions as part of a normal observing run. What he saw was, even with his long career working at the Subaru Telescope, the image of an exceptionally bright big fireball zipping through the sky, caught by the University of Hawai'i 88-inch Telescope All-Sky Camera. The bright arc of light created by such a fireball looked like the smile of the Cheshire Cat in the tale of the "Alice in Wonderland" by Lewis Carroll. The vanishing end of the fireball was also seen in the Canada-France-Hawaii Telescope's CloudCam monitor.

In many cultures, spotting a "shooting star" is considered a good luck omen. Sometimes, such an event showers space rocks onto the ground, which are incredibly rare and valuable. Anyone finding one of these rocks would be very lucky, indeed. Tanaka wonders from time to time if there was a report of a meteorite found somewhere on the western part of the island of Hawai'i by some lucky rock hound. 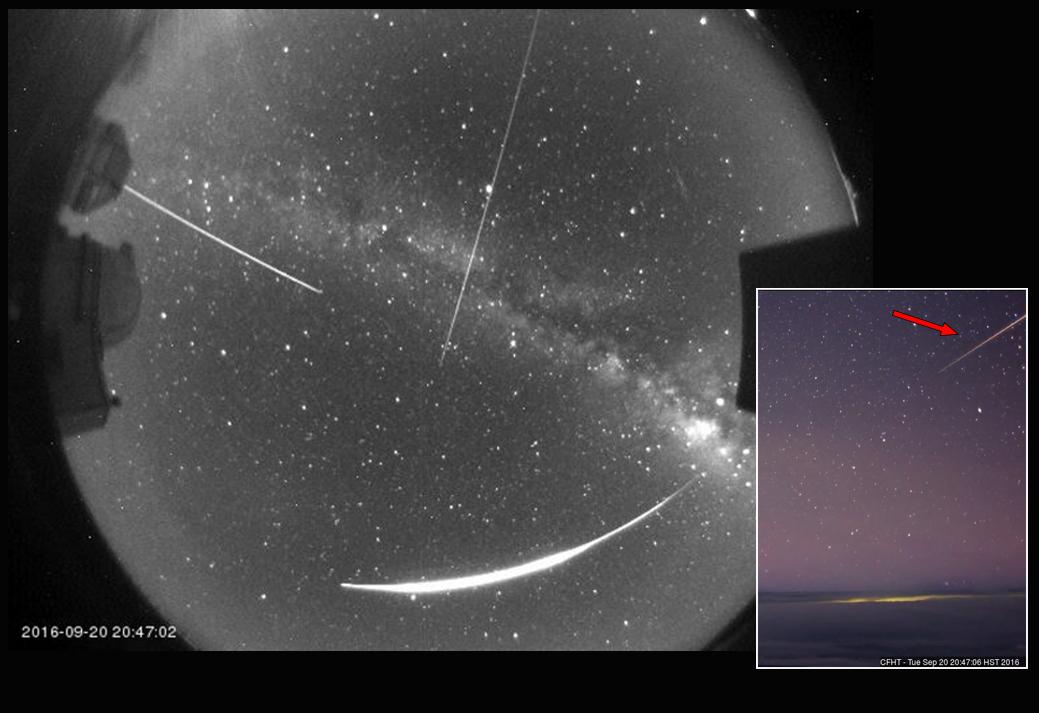 Figure 1: Images showing the big fireball on the night of September 20, 2016 over Maunakea. The larger image is from the University of Hawai'i 88-inch Telescope All-Sky Camera. Telescopes of Gemini Observatory and Keck Observatory were using laser guide stars for their observations.The smaller image is CloudCam of the Canada-France-Hawaii Telescope. Permissions were granted to post these images from the respective institutions. Image capture and composite by Ichi Tanaka, Subaru Telescope. (Credit: UH 88-inch Telescope, CFHT, Ichi Tanaka/NAOJ)