Subaru Telescope staff members have eagerly shared their passion for the stars and galaxies with members of the larger Hawai‘i community this past winter. From memorial celebrations and astronomy workshops to STEM presentations and observatory tours, Subaru staffers brought a love of astronomy to both children and adults.

This year 2016 marks the 30th anniversary of the space shuttle Challenger's final lift-off. Seven astronauts, including the first astronaut from the island of Hawai‘i, forever left this Earth on that day. Onizuka's legacy lives on, and it inspired the children who gathered at the University of Hawai‘i at Hilo on Saturday, January 30th for a celebration called Astronaut Ellison Onizuka Science Day. As in past years, the Subaru Telescope staff participated in this event and interacted with students and their families, as well as with local educators.

At the Subaru display booth, staffers gave a simple demonstration of what a spectroscopic grating does, using lights in the university library to show how gratings split light into spectra. That led to a conversation about how astronomers decipher the chemical compositions of the stars and how they use light to measure the velocities of speeding galaxies. Attendees were particularly interested in learning more about planets in our solar system as well as those circling other stars. The extremes of this year's winter, due to El Ninõ, raised the question: "What if this is the norm on another planet?"

Sorting out Galaxies and Building Telescopes

Onizuka Science Day festivities also included two other workshops, both in the morning and in the afternoon, conducted by Subaru Telescope staff. First, Dr. Yuko Kakazu invited participants to categorize galaxies by examining their various shapes. It was a popular activity, and the diversity of classifications measured by the excited participants exceeded the variety of the galaxies!

In a second workshop, Dr. Saeko Hayashi helped students and families to build small telescopes for their own use. After much diligent work, the young telescope makers were able to focus their instruments, and even noted that the images appeared upside-down (as they do in many telescopes). The participants left with a homework assignment to show the Moon to their families that night.

This year, the exhibits and workshops for Onizuka Day covered a wider range of activities to show participants that space exploration is a very broad subject. Astronomy observations are no longer limited to the use of a sleek tube with two lenses to see dim and distant objects. Today astronomy technology plays a part in some very interesting disciplines, including cooking, circuit analysis and even as far afield as dissecting fish to understand their biology. It was also very fitting that the day included discussions and workshops about sustainability, which is very relevant subject in this island state, and to the participants – who came from east and west Hawai‘i as well as from neighboring islands.

Ellison Onizuka was the first astronaut from the island of Hawai‘i. Someday, perhaps a participant in these workshops, inspired by his example and the festivities in his honor, will leave Earth's orbit to go visit another planet.

On February 18, 2016, students from the schools on the east side of the island filled the large Sangha Hall in Hilo to visit booths showcasing professional workplaces in the local community. This event was organized to show high school students the amazing array of careers they can pursue in science, technology, engineering and math (STEM). Subaru Telescope was represented by members of the observatory's day crew, a telescope operator, human resources manager, and outreach specialist. They shared information about the skills needed to work at such a state-of-the-art facility, and invited students to consider working in the sciences. A hands-on demonstration quickly caught the attention of many students, perhaps piquing their interest in pursuing a STEM career.

Information sheet showing the jobs at the observatory were popular among middle-school and high-school students, which spurred some serious discussion about what kind of jobs are available now and in the future. Video clips on a computer display demonstrated the actual work at the telescope, to give students a more realistic idea about the complexity of the work.

Sharing the Cosmos with Grown-ups: the Kama‘āina Observatory Experience

On Saturday, February 20, 2016, the Subaru Telescope welcomed the first group of guests in the Kama‘āina Observatory Experience (KOE) program. Visitors came from all over the island, despite bad weather due to the extreme El Ninõ. Fortunately, a brush fire that had blocked access from the Kona side earlier that week (weekend before) subsided in time.

Telescope director Nobuo Arimoto was the tour guide for this first session through the maze-like building, which integrates both the shops and the telescope. First, the guests went up in a lift that opens like a sci-fi movie turbo-shaft. They walked up and down the "ships ladder", through the mirror-handling equipment (where they were warned "watch your head!"). The visitors were reminded of one of Subaru's secrets: that the upper enclosure does not have a toilet because a rotating building is not suitable for plumbing.

During the visit the guests observed staff members conducting scheduled maintenance work even though it was Saturday. Daily and weekly maintenance is important to keep the telescope alive and functioning at its highest efficiency. The building itself is part of the machinery of the observatory and protects the system from the harsh mountain-top environment, particularly the warm and turbulent air that circulates around the building during the day.

Guests peppered Dr. Arimoto with many good questions about the observatory. Many of them were curious about the prospects of this telescope being used to discover the new planet in the outer solar system. There is already at least one trans-neptunian object (TNO) that carries the name of the Hawai‘ian Haumea. Guests cheerfully suggested that if a new planet is verified from the summit of Maunakea, it should also have a Hawai‘ian name. 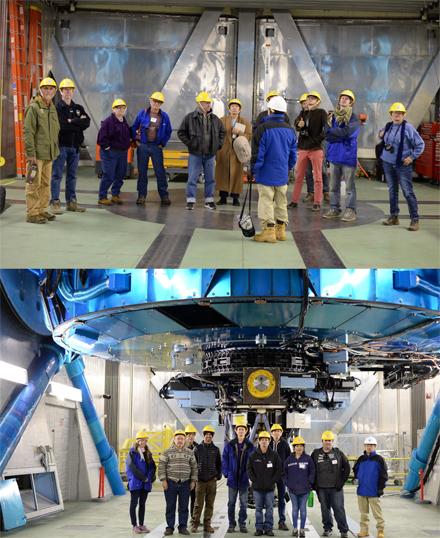 These marks are used to help proper representation of Hawai‘'ian language. In this article, those glottal stop marks are used as much as possible to the best of the writer's knowledge.