Talk about the Planet Search

Standing Room Only at the Universe Tonight

"How many planets do you think are out there?" That was the question Dr. Olivier Guyon, one of the presenters at the Universe Tonight program on Saturday, January 2, 2016, used to challenged his audience. In the packed presentation room at the Maunakea's Visitor Information Station, answers rang out from the standing-room-only crowd.

Dr. Guyon greeted the responses with a smile. "Talking about the ones going around the stars other than the Sun, we call them exoplanets, and there are actually many," he said, delighting the audience with talk of exoplanets – the worlds that orbit other stars.

More than thirty years ago, not a very long time in the history of astronomy, no one had found any planets outside of the solar system. Today, there are about two thousand confirmed cases, plus another few thousand candidates waiting for follow-up measurements. Most of these worlds are quite different from ones in the solar system, particularly when you compare their masses and orbits. For example, imagine a planet ten times heavier than Jupiter orbiting its star in just a few days! So, the discovery of exoplanets is showing astronomers the different types of planets and formation scenarios around other stars.

Most exoplanets are identified using a technique called the "transit method". Here's how it works: if an exoplanet's orbit is aligned edge-on to our point of view, we can detect the planet as it passes in front of its star. The star appears to dim slightly. If this happens at very regular intervals, that's evidence of a planet orbiting the star.

At the Universe Tonight gathering, Dr. Josh Walawender also spoke about exoplanets to the crowd at Universe Tonight. He focused on how astronomers work to find these distant worlds. "How do we increase, drastically, the number of planets' discovery?" he asked. "By covering as much area as possible in the sky, as often as possible."

Walawender pointed out that big telescopes aren't needed to detect signs of exoplanets. There are ways to achieve coverage of the area and the time using small, low-cost telescopes instead of the large, expensive ones. Once the candidate planet is identified, then the big telescope can devote time to point to that target.

The search for the exoplanets, especially the ones that have conditions similar to the Earth, is a fascinating subject for many, not just professional astronomers. The search for these so-called habitable worlds outside of our solar system is one of the most exciting questions of our time and it reveals a great deal about how Earth was formed.

To show the audience how smaller telescopes can be used to find other planets, Dr. Walawender rolled out a small piece of equipment not unlike the robot character in the Wall-e movie. It's called Panoptes, a citizen science project led by Olivier Guyon, Walawender and their collaborators. They plan to use Panoptes units with two cameras, all encased in a sturdy box to protect them from bad weather. A separate box holds the control system that allows the instrument to monitor a patch of the sky. Panoptes is made using consumer products that are easily available and affordable.

Astronomers take the data from Panoptes and run it through software that helps them pick up a hint of a planet around another star. This crucial code helps them determine changes in the brightness of a star as an object crosses in front of it, whether it dims or not, and if that dimming is periodic. With that information, they deduce the size and orbit of that object.

What would happen if you could have multiple Panoptes units around the world? The answer is, astronomers would have good coverage of the sky across more time. That gives them more chances to identify exoplanets. For now, one unit is being tested at the Mauna Loa observatory site. Another will be positioned at the Visitor Information Station, and yet another one goes to ‘Imiloa Astronomy Center.

During the evening, Dr. Yuko Kakazu presented the same message about Panoptes and planet-hunting in Japanese, making the idea of planet-hunting by teams of amateurs and professionals a truly global one.

During the question-and-answer session after the planet-hunting scientists finished their talks, one audience member enquired about the possible involvement of science museum groups or even high school astronomy clubs in the Panoptes project. The answer was a resounding "affirmative!"

Subaru scientists invite everyone to work together in one way or another to decipher the mysteries of the universe, and search out new planets around other stars. That is the New Year's resolution of everyone at the Subaru Telescope. 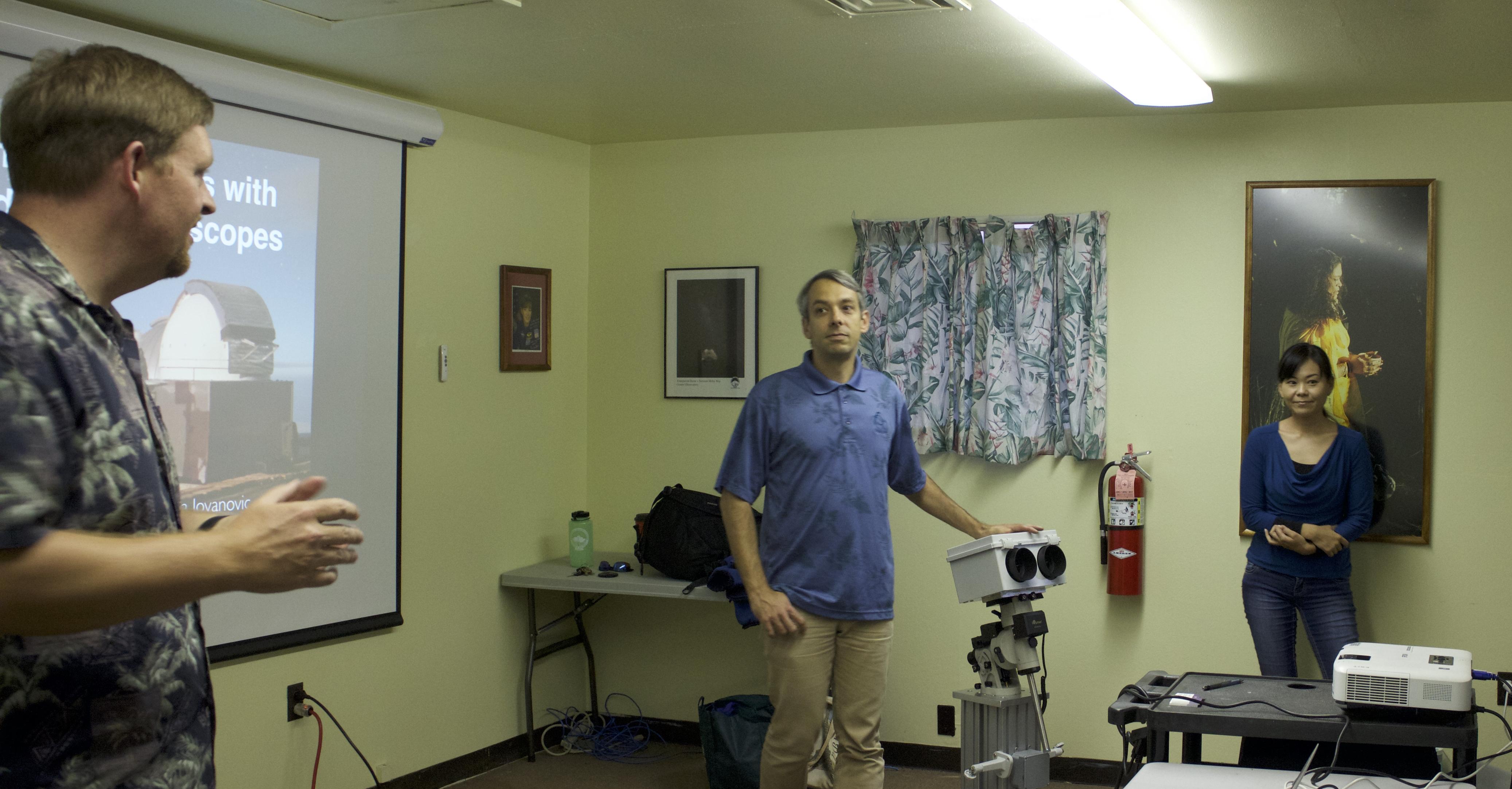 Figure 2: Panoptes unit with Dr. Josh Walawender (left), Dr. Olivier Guyon (middle) and Dr. Yuko Kakazu (right). Two cameras with wide field of view lenses on a motor-controlled mount, mounted in a sturdy box for protection. The drive control as well as the camera control system is in a separate box for protection from the environment.