A high-resolution fisheye camera mounted atop the Subaru Telescope on Maunakea, Big Island, Hawaii, caught a full overhead view of the annual Geminid meteor shower on the night of December 13-14th, 2015. The Geminid meteors appear to radiate from the constellation Gemini. Those meteors are dust grains that stream away from the active asteroid 3200 Phaethon as it orbits the Sun. The shower occurs when Earth passes through that stream and the grains plunge through our atmosphere.

The camera took one image every three minutes throughout the night. The images were combined into a time-lapse video showing many meteorites crossing the sky. Some are very bright, such as one crossing just below the Andromeda Galaxy (M31) in the Figure. The views also reveal the zodiacal light and the Milky Way. The sky is decorated by the stars of the winter constellations of Orion and Gemini, as well as the Pleiades star cluster (M45, called Subaru in Japanese). Except for the airglow and some localized lights of passing vehicles, the images show how very dark the sky is over Maunakea. 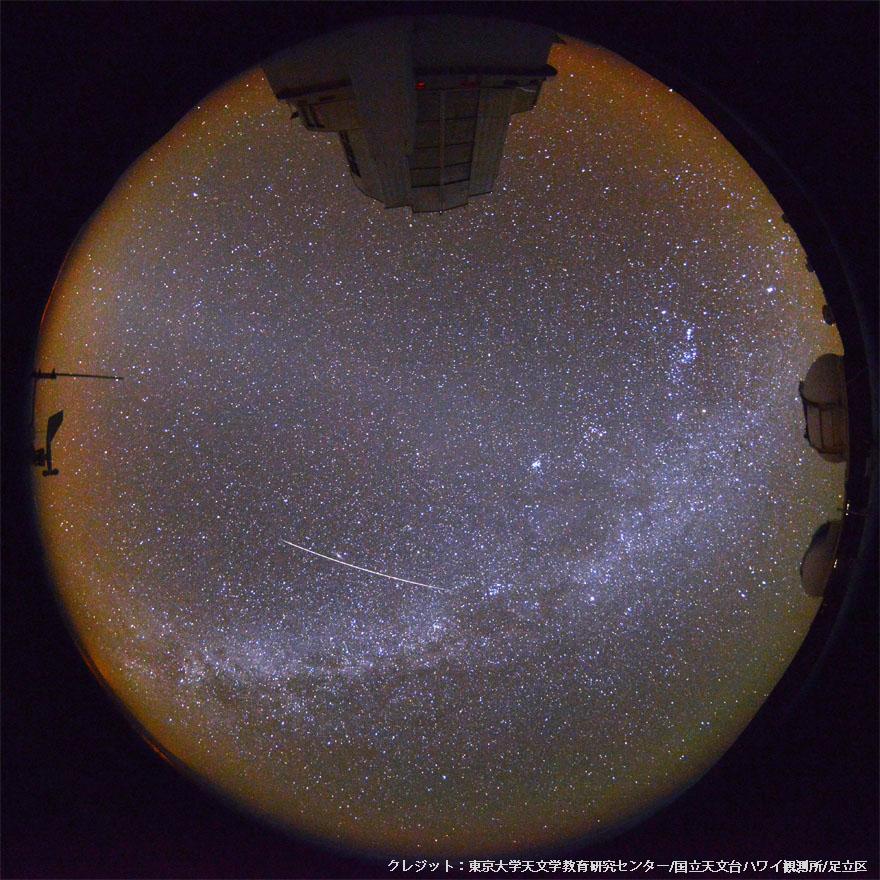 Figure: A big meteorite crossing the sky over the telescopes on Maunakea at 21:21, December 13, 2015 (Hawaii standard time), with the constellation Orion "surfing" on the meteor. East is to the right, south is at the top. (Credit: Institute of Astronomy, University of Tokyo / Subaru Telescope, NAOJ / Adachi City)

Video: Time-lapse video of the sky over Maunakea during the night of December 13-14, 2015. (Credit: Institute of Astronomy, University of Tokyo / Subaru Telescope, NAOJ / Adachi City; compiled by Hideaki Fujiwara)

The camera used to create the images for the video is operated by a collaboration of three entities: Institute of Astronomy, the University of Tokyo, the Subaru Telescope, National Astronomical Observatory of Japan, and Adachi City, Tokyo. Normally, exposures are made every ten minutes. That interval was changed for the peak night of the Geminids to capture the full beauty of the shower. Camera images are archived for public view at the website of the Adachi City's Adachi Children's Creative Museum.