How a Telescope Tracks Its Target

Two video sequences taken by astronomer Sean Goebel in October 2015, give viewers a unique view of just how a multi-ton telescope delicately tracks its celestial targets. Goebel, a graduate student at the Institute for Astronomy at the University of Hawaii and a team member on the Subaru Telescope, used a pair of cameras inside the enclosure building and located behind the Subaru Telescope to capture the motion of the telescope as it stayed "on target" throughout a night of observing. 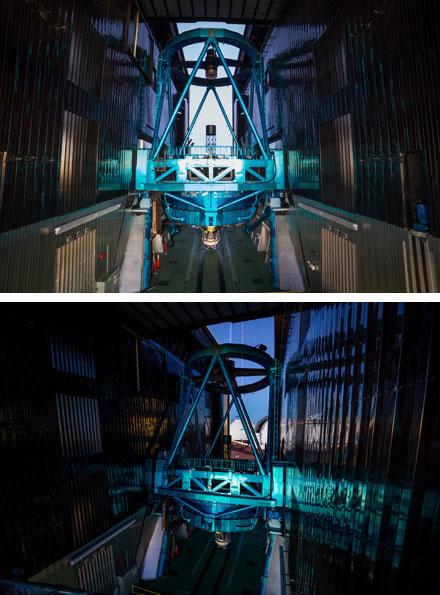 The first part of the video and Figure 1a were taken from a spot directly behind the telescope, using a Canon EOS 6D and a 1-minute exposure. The second part of the video and figure 1b show the Subaru Telescope motions from the rear and right sides. This video may cause some viewers discomfort, according to photographer Sean Goebel. "During the change of the target, the rapid motion might make viewers of this video a bit queasy. Please do not fast-forward the video," he said. Images were taken with Canon EOS 6D with 1-minute exposure, by Sean Goebel (Institute for Astronomy, University of Hawaii; Subaru Telescope, NAOJ)

In the first sequence, shot on the night of October 2, 2015, the telescope can be seen moving up and down around the altitude (elevation) axis. It also spins around in the azimuth direction, along with the enclosure. This video is a good demonstration of how the alt-azimuth mounting works on the Subaru Telescope, and on other large optical-infrared and radio telescopes. That mount is different from the more conventional equatorial mount familiar to many observers. Once an equatorial mount telescope is aligned with the pole star, Polaris, the telescope simply follows the observational target as its tube rotates around the polar axis. The advantage is that the field of view does not change as the telescope tracks.

Larger telescopes are much heavier and more massive, and they need to use the alt-azimuth mount to support their weight. However, that type of mounting also allows the field of view to rotate. Users compensate for that action by rotating the camera or using image de-rotator optics.

For the Subaru Telescope, the primary and the Cassegrain focus points have an instrument rotation mechanism. The two Nasmyth foci have image rotators in the optical path. The optical alignment is very important for observations, so the staff conducts a very thorough procedure to realign the optical axes whenever there is an instrument change.

The second part of the video shows telescope actions as seen from the rear and right side of the telescope. The night these were shot, the telescope was scheduled for infrared observations. To compensate for image degradation caused by turbulence in Earth's atmosphere, the adaptive optics system was used with an artificial, laser-created guide star as a reference. The orange beams extending up from the Subaru Telescope, as well as the neighboring Keck Telescopes, show where the lasers are creating artificial stars 90 km (56 miles) above the ground. The waning gibbous Moon rose at around 10:30 pm. The telescope enclosure shutter was closed twice for short periods to block humidity from passing clouds.

All the image sequences were taken with Canon EOS 6D with 1-minute exposures, by Sean Goebel (Institute for Astronomy, University of Hawaii; Subaru Telescope, NAOJ)