When JAXA astronaut Kimiya Yui tweeted a picture of Maunakea from the International Space Station, Subaru Telescope's astronomer Dr. Hideaki Fujiwara returned the favor by taking an image of the ISS flying high over the mountain on November 4, 2015. Yui is Japan's only astronaut onboard the ISS at that time, and is working on a long-term assignment as a flight engineer. 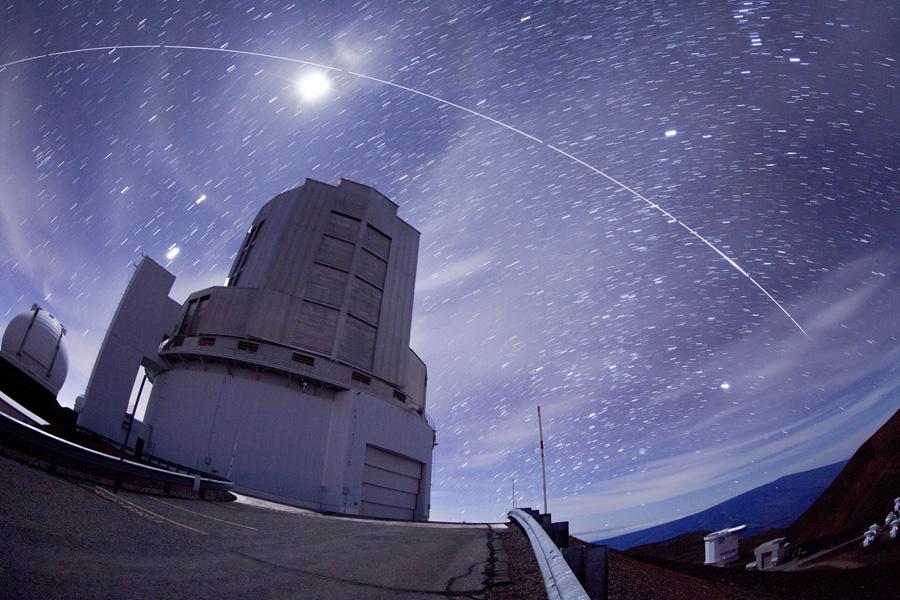 Figure: The track of the International Space Station (ISS) shines over the Subaru Telescope enclosure. The ISS went from the lower right to the upper left. The view combined 9 images taken with 30-second exposures. Hideaki Fujiwara photographed this from 5:12 to 5:17 on the morning of November 4, 2015. (Credit: NAOJ/Hideaki Fujiwara)

In Fujiwara's image sequence, the station looks like a bridge of light shining high over Maunakea. Dr. Fujiwara, who is Subaru Telescope's Public Information Officer/Scientist described conditions on Maunakea when he took the images, "It was very windy, the Moon was bright, and the high clouds were roaming around," he said. "Even with these bad conditions, it was delightful to see the shining trace of ISS in the sky over Maunakea. It looked as bright as Jupiter."

Video: The bright track of the International Space Station over Maunakea. Made from images captured on the morning of November 4, 2015. (Credit: NAOJ/Hideaki Fujiwara)