Subaru Telescope photographed an asteroid (162173) 1999 JU3 at the crack of dawn of May 20, 2015. This is a near Earth object detected in 1999 and a little smaller than 1 km (0.6 miles) where the Japanese asteroid explorer Hayabusa2 is going to visit. The explorer was launched in December 2014 by Japan Aerospace Exploration Agency.

Figure 1: Near Earth asteroid (162173) 1999 JU3, imaged by the Subaru Telescope. The GIF animation is composed from three images of 30 seconds exposure each in 1-minute interval. The field of view is 1 arc minute by 1 arc minute cropped from the Hyper Suprime-Cam's image, taken between 4:21 and 4:24 in the morning of May 20, 2015 in Hawai'i. The animation shows the appearance of object moving with respect to the distant, background stars. (Credit: NAOJ)

(162173) 1999 JU3 was about 240 million km (150 million miles, 1.61 times the distance between the Earth and the Sun) at the time of the observation. Due to its small size, its brightness was only 22.3 magnitude. The light collecting power of the Subaru Telescope could easily catch this object in mere 30 seconds exposure.

Dr. Tsuyoshi Terai who made this observation says "The observation condition was not ideal because it was getting lighter and it was a bit cloudy. I am very pleased that 1999 JU3 was clearly visible in the image. How does it look like, and what can it show the history of the solar system? I am very much looking forward to the arrival of Hayabusa2 on this object." 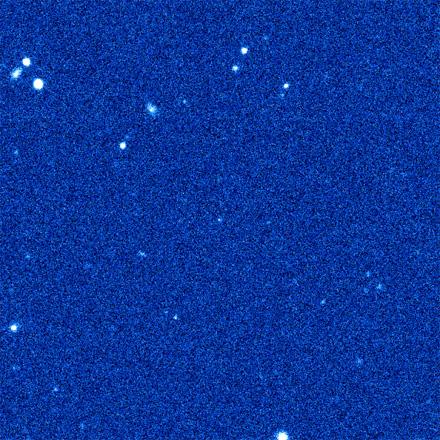