On January 24, 2015, the staff of the Subaru Telescope participated in the Astronaut Ellison Onizuka Science Day and shared the joy and wonders of science and space exploration with Hawaii's youth. Dedicated to the memory of astronaut Ellison Onizuka (Note), who was a native of the island of Hawaii, this annual event marked its 15th anniversary this year. The University of Hawaii Hilo campus was packed with over 600 enthusiastic students in grades 4-12, their adult companions, and teachers. The Subaru Telescope is committed to community-wide STEM (science, technology, engineering, mathematics) education and has been playing an integral role in the Onizuka Science Day since its inauguration in 2001. 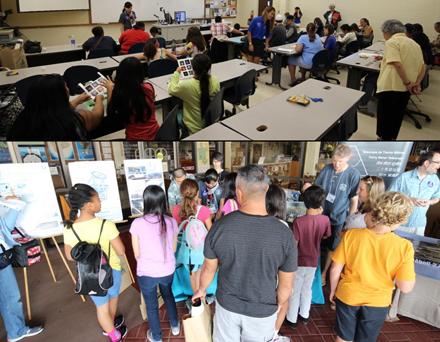 Figure 1: The Subaru Telescope staff sharing the joy and wonders of science and space exploration. (Top) The participants of Dr. Kakazu's "Make your own Universe!" workshop sorted galaxy images into categories of their own devising. Some came up with a yummy galaxy group, such as "sunny side up" galaxy type! (Bottom) The Subaru Telescope booth had a constant flow of people. (Credit: NAOJ)

The day started with an inspiring speech by the Japanese Aerospace Exploration Agency (JAXA) astronaut Koichi Wakata. Dr. Wakata was the first Japanese astronaut to serve as a commander of the International Space Station and accumulated more than 11 months of stay in space. He talked about his journey to become an astronaut and his experience in space, inspiring the next generation of astronauts.

This year's program included 18 science workshops and 26 engaging exhibits. Throughout the day, the Subaru Telescope's display was packed with people, who enthusiastically engaged in hands-on activities and conversations with the staff. Children and adults alike enjoyed looking through a small hand-held cardboard telescope and making rainbows using a "spectrum card" that separates light into different colors. Free hand-outs such as informational pamphlets, stickers, and postcards with pictures from the Subaru Telescope were ever popular.

Two PIO (Public Information and Outreach) staff members, Dr. Saeko Hayashi and Dr. Yuko Kakazu gave workshops on telescopes and astronomical objects. In her one-hour workshop entitled "Build you own telescopes", Dr. Hayashi explained how a telescope works and participants made their own small telescopes using simple tools: two lenses and a tube. After the work shop, fortunate participants of this "sold-out" workshop were left with not just a telescope but also with the knowledge of building and using it. In "Make your own Universe" workshop, Dr. Kakazu talked about various kinds of astronomical objects and their distances. Participants were given a few dozen pictures of galaxies and were asked to sort them according to any criteria they choose. This creative activity led them to experience scientific way of thinking, just like the legendary astronomer Edwin Hubble, who devised the most commonly used galaxy classification scheme.

The enthusiasm and excitement shared between the participants and observatory staff radiated out from this special event. One day, some of the participants may become the future generation of astronauts, scientists, and engineers. The Subaru Telescope strives to keep the legacy of Ellison Onizuka and his dream of inspiring young people to pursue science and technology: "Make your life count and the world will be a better place because you tried."

Hawaii-born astronaut Ellison Onizuka was the first Asian-American astronaut to reach space. He perished in the explosion of the Space Shuttle Challenger, on which he was serving as a mission specialist. Two centers on the Island of Hawaii, Onizuka Space Center at Kona international airport and the Onizuka Center for International Astronomy on Mauna Kea, were named in his honor.