Suprime-Cam, the wide field of view imager mounted on the primary focus of Subaru Telescope, has been the choice of many astronomers for their research. It captures a variety of objects - small bodies in the solar system, star forming regions or the supernova remnants in the Milky Way Galaxy, merging galaxies, and the galaxies in the far distant universe. Thanks to its wide field of view of 34 arc minutes times 27 arc minutes, CCD sensors sensitive in the wide range of optical wavelengths especially in the red colors, fast read out of the data, and so on contribute to the success of this instrument.

In order to choose specific color in the light that reaches the sensor, astronomers can use wide-band filter or narrow-band filter. The former is useful in characterizing the color of the target, while the latter that lets only narrow wavelength range of the light to go through, is particularly powerful in picking objects at certain redshift, hence at a specific point in time in the history of the universe. Having a filter stacker for 10 different filters with automated exchange system, thus, is very useful since there is no need to wait for next day to replace the filter.

Figure 1: Suprime-cam consists of different parts; [left] from the top is the cable wrap system, then the imaging part itself including the filter exchange system [right], and the optical corrector at the bottom. Since this imager sits at the primary focus, namely, at the top of the telescope, light reflected from the primary mirror below comes in from the bottom of the imager. (Credit: NAOJ)

[How the filter exchange system works]
The automated filter exchange procedure goes as following. From the stacker, the selected filter comes out to the elevator system waiting in front of the stacker, by using rack and pinion transfer. The elevator goes down to the level of the filter holder, under the dewar that keeps the CCD sensors cool. The filter traverses from the elevator to the filter holder, using the rack and pinion system again. After receiving the filter, the holder locks it so that the filter does not move around when the telescope starts to track a star or a galaxy according to the target of that night. It is like a robot picking up an item from the storage shelf and put it on the conveyor for shipping. The return trip is just to reverse the above procedure.

Space is very tight for this instrument, since it sits at the top of the telescope and it blocks the incoming light. Therefore the instrument is very compact and it was really challenging to take photos or videos to capture what is going on inside. This video recording was done when the support astronomers remove the filter one by one to store them in a special box before transporting the imager back to the summit of Mauna Kea. The instrument was at the base facility in Hilo, having undergone some modification work. At the sea level, it was easier to concentrate on such a delicate work, and the environment reasonably dust free contrary to the summit facility where the cinder particles tend to migrate into the building. 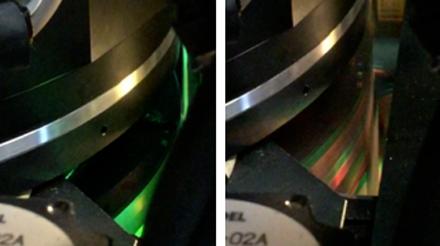 Figure 2: Different filters show different colors; one allowing the pass of shorter wavelength; the other for longer wavelength. (Credit: NAOJ)

The long term stability and good performance of a sophisticated equipment like this filter exchanger owes to the continued maintenance or upgrade work by the staff such as Drs. Fumiaki Nakata and Tsuyoshi Terai, both the support astronomers for Suprime-Cam and other instruments.