A research team of astronomers led by Dr. Krzysztof Helminiak (Subaru Telescope) investigated an unusual eclipsing binary composed of two giant stars, making the most precise measurements of masses and radii of such stars within the Milky Way Galaxy. The discovery has been announced in the prestigious journal Monthly Notices of the Royal Astronomical Society.

The binary system HD 187669 is located almost 2000 light years from the Earth toward the constellation Sagittarius. It is a pair of relatively cool, red stars, one of which is over 11 and the other over 22 times larger in diameter than the Sun. Together, these stars make an eclipsing binary, which means they regularly hide one behind the other. Both are red giants – stars that already passed most of their lives. In about 4.5 billion years the Sun will also become a red giant, similar to the components of HD 187669.

Two teams noted the interesting characteristics of the system independently. One, led by Dr. Krzysztof Helminiak (currently at the Subaru Telescope, Hawaii) is related to the N. Copernicus Astronomical Center of the Polish Academy of Sciences. The other was led by Dr. Dariusz Graczyk from the Universidad de Concepcion, Chile and included scientists from the Astronomical Observatory of the Warsaw University. The teams have worked in parallel, analyzing the same set of their own observations taken with the ESO-3.6m and PROMPT telescopes located in Chile, and publicly available data acquired by the ASAS and SuperWASP projects. 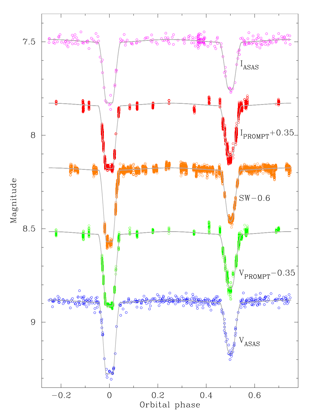 Figure 1: Photometry of HD 187669 (open circles) and models (grey lines) for each band. PROMPT and Super- WASP data were shifted for clarity by the indicated values (in magnitudes).

The results include for example measuring the sizes of both stars accurate to only 2.5 %, their masses with the precision of only 0.25 %, which is one of the best results ever, and the distance to the system with precision comparable to the capabilities of the recently launched Gaia satellite. Such accuracy was possible to reach only because the stars form an eclipsing pair, which is a rare configuration for two giants. The components of HD 187669 – both weighs 50 % heavier than the Sun - are the first Galactic giants whose parameters have been obtained so precisely. Additionally, the system itself occurred to be unique from one more reason. Every 88 days, which is the pair's orbital period, the smaller star hides completely behind the larger. This is unusual even among the eclipsing binaries. Dr. Helminiak explains "Some of the physical properties of stars, such as the temperature of their surface, or the chemical composition, can be deduced by analyzing their light. Normally, in case of binaries we observe two stars in the same time. Their light is mixed and the analysis becomes challenging.", "However, every three months, for few days we could observe only one star of the HD 187669 system, and study it in details. It was not easy taking into account that the event of total eclipse can be observed only few times a year, and the telescope time is limited.", added Dr. Graczyk.

Giant stars, both single and in binary systems, were of course known in the Galaxy before. They are however relatively rare, because this late stage is very short, comparing to the rest of the star's life. Due to this fact our knowledge of giant stars is somewhat limited. Precise derivation of parameters of the HD 187669 binary helps the astronomers to better understand the late stages of evolution of stars similar to the Sun. Thanks to such systems we have a better insight into the future of our daily star. Both teams promise more discoveries similarly exciting.

The research paper was first published online February 23, 2015 and April 1, 2015 issue of the Monthly Notices of the Royal Astronomical Society.