Announcement of the Construction Phase of the Thirty Meter Telescope, a New Neighbor on Mauna Kea

Subaru Telescope and the eleven other telescopes located atop the sacred Hawaiian mountain of Mauna Kea, will have a new neighbor and collaborator, the next-generation Thirty Meter Telescope (TMT). TMT just announced the beginning of its construction phase, scheduled to start later this year, after the Board of Land and Natural Resources (BLNR) gave final approval of its proposed sublease on July 25, 2014. Kahu Ku Mauna (a community-based council, whose members are drawn from the native Hawaiian community) as well as the Mauna Kea Management Board (MKMB) had reviewed, and the University of Hawaii Board of Regents had previously approved, the proposed TMT sublease earlier this year. 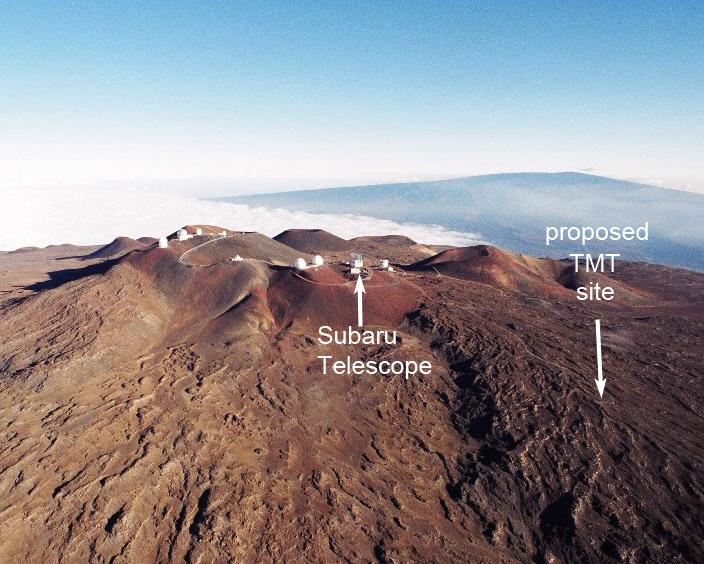 The Association of Canadian Universities for Research in Astronomy (ACURA), the California Institute of Technology (Caltech) and the University of California initiated the TMT project a decade ago. The National Astronomical Observatory of Japan (NAOJ), which had been studying the construction of its own 30 meter-class telescope based on the design of the Subaru Telescope, decided to join TMT as a participating institution in 2008. Now organized as the TMT International Observatory (TIO) since May, 2014, it currently consists of founding members Caltech, China, Japan, and the University of California. Associate members India and Canada are expected to become full members shortly.

Initial construction activities in Hawaii will include grading the site in preparation for future building work, enabling a site dedication ceremony later this year. Gary Sanders, Project Manager for TMT, confirmed TMT's commitment to work within the MKMB's plan for responsible development on Mauna Kea: "TMT has worked for many years [not only] to design an unprecedented telescope, but also to work with the community to incorporate respect for Mauna Kea in our stewardship. It is an honor and a privilege to now begin building our next-generation observatory in so special a place." Sandra Dawson, TMT's Manager of Hawaii Community Affairs, affirmed, "The start of construction of TMT is great news for Hawaii Island residents. We are proud to be a good citizen of the community as we all work toward building a revolutionary astronomical instrument."

Off-site work has already begun and will continue now apace. Professor Masanori Iye, TMT International Observatory Board Vice Chair and TMT Japan Representative for the National Astronomical Observatory of Japan, National Institutes of Natural Sciences, noted, "Japan has seen to the production of over 60 mirror blanks made out of special zero-expansion glass that does not alter its shape with temperature changes. The blanks will be highly polished for use in the telescope's 30 meter diameter primary mirror. Other key contributions of Japan are the design and fabrication of the entire telescope structure, which will enable precise pointing and smooth tracking of astronomical targets. The final design of the telescope structure itself is nearing completion."

The telescope will be used to observe exoplanets, which orbit stars other than the Sun, and will enable astronomers to study the formation of new planets and stars. It will also help scientists to not only investigate the evolution of the Universe by glimpsing into its early years, over 13 billion years ago, but also to explore other great mysteries of the Universe such as black holes.

It will complement the capabilities of current telescopes and foster future collaborations. For example, Subaru Telescope's power for making observations over a large area can provide astronomical targets that TMT can follow up with detailed observations. This is a particularly powerful combination for finding and studying some of the most distant galaxies in the Universe. As Professor Nobuo Arimoto, Director of the Subaru Telescope, recently commented, "The powerful combination of the wide-field coverage offered by Subaru Telescope and the high sensitivity and spatial resolution of TMT will surely expand the horizons of human understanding of our Universe."