A Potpourri of Subaru Telescope Activities at AstroDay

Ripples of laughter punctuated with bursts of "wow" drifted through the corridors of Prince Kuhio Plaza on Saturday, May 3, 2014, where the 13th annual AstroDay Festival took place from 10 a.m. to 4 p.m. Throughout the day, a total of 25 Subaru Telescope staff members became catalysts for sharing the joy of astronomy with the general public at the telescope's booth in the mall. The staff's enthusiasm and the public's interest in the exhibits were contagious.

AstroDay is Hilo's version of international Astronomy Day and is one of Hawaii's biggest astronomical outreach events. It featured over 40 exhibits, demonstrations, and activity areas throughout Prince Kuhio Plaza. A series of performances by local musicians at center stage added to the joyful tone of the festivities. 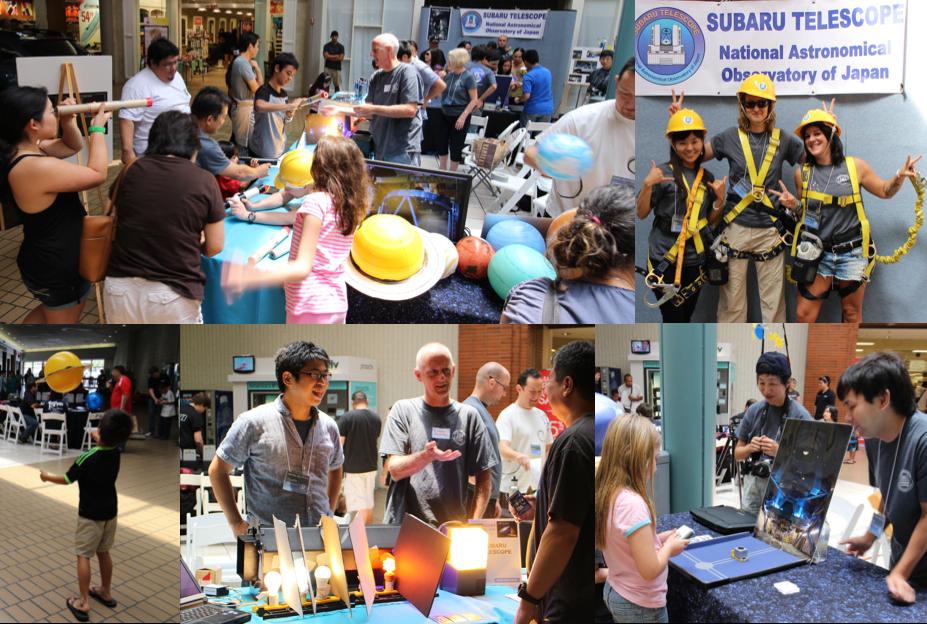 Subaru Telescope staff members have participated in AstroDay since its inception in Hilo 12 years ago. This year, Subaru Telescope's booth featured a potpourri of seven hands-on activities and demonstrations. Some dealt with people and activities that are essential to setting up observations and maintaining the telescope. Subaru staff members modeled the gear that summit technicians wear as part of their work. Some visitors used a remote control to operate a small robotic replica of the Cassegrain Instrument Auto Exchanger (CIAX), which was set up to simulate the way in which instrument exchanges take place on the Cassegrain floor of the enclosure at the summit.

Other activities focused on fun ways to demonstrate how the telescope collects scientific data. Visitors could look through small, cardboard hand-held telescopes to see how the lenses magnify and make distant objects appear nearer. The spectroscopy demonstration gave guests the opportunity to understand the properties of light by looking through spectroscopy cards at different types of lights and seeing for themselves how the configuration of colors from various lights changes. Adults and children alike were fascinated by the ultraviolet light demonstration, which showed ultraviolet-sensitive beads changing from white to colors when exposed to sunlight or light from an ultraviolet flashlight. Staff members gave away all 300 kits, which included some ultraviolet beads and a string for making a bracelet of them.

A couple of other activities concentrated on providing information about astronomical objects. Inflated Solar System balls, similar to smaller versions of beach balls, helped children understand the sizes and distances of the planets in relation to the Sun. Most of the free postcards showed many different images obtained from observations with the Subaru Telescope and were the catalyst for talking with visitors about various scientific topics.

Free handouts included stickers, postcards, ultraviolet bracelet kits, and informational brochures about the Subaru Telescope. The biggest gifts of the day were the time that Subaru Telescope staff took to engage the public with the joy of astronomy as well as the fascination and curiosity on the faces of the visitors as they learned about Subaru Telescope and astronomy. As Dr. Yuko Kakazu, Subaru Public Outreach Specialist who led Subaru's booth, concluded, "Our staff was very excited to share the joy of astronomy with so many people, especially the kids, who are curious about everything! Subaru Telescope's Public Information and Outreach Office will keep the community updated about the latest discoveries made with our telescope."