Dr. Motohide Tamura, professor at the National Astronomical Observatory of Japan (NAOJ) and the University of Tokyo, was recently awarded the 2014 Toray Science and Technology Prize for excellence in Subaru studies of exoplanets and their formation sites. The Toray Science Foundation gives this award to two distinguished scientists each year to recognize outstanding achievements in science. It invites leading scientific societies and selected scientists to recommend candidates for the prize and then selects two of them for the prize.

Dr. Tamura is the director of the Extrasolar Planet Detection Project Office at NAOJ and the leader of the Strategic Explorations of Exoplanets and Disks with Subaru (SEEDS) Project (Subaru Telescope's Imaging Discovery of a Second Jupiter Shows the Power and Significance of the SEEDS Project). By combining the advantages of the High Contrast Instrument for the Subaru Next Generation Adaptive Optics (HiCIAO) with Adaptive Optics 188 (AO 188) at Subaru Telescope, this group has been making discoveries of exoplanets and circumstellar disks since 2009. 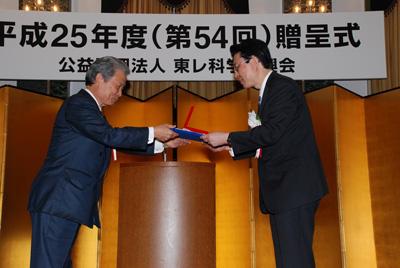 Dr. Tamura expressed his appreciation for the award by saying, "It's a great honor to receive this award. My research has been based on collaborations with many people, including those who built the Subaru Telescope and its instruments, and I would like to express my gratitude to them."

He then described how the award provides encouragement for continuing innovative, scientific research.

More than 1700 exoplanets, i.e., planets orbiting stars outside of our Solar System, have been discovered. Exoplanet research is one of the hottest fields in astronomy. Most exoplanets have been discovered by indirect observational methods, which provide valuable information for statistical studies. The next big milestone is a direct method of characterizing exoplanets.

To meet this challenge, we developed a new instrument, HiCIAO, and have begun a large survey for direct imaging. As a result, we have finally imaged an exoplanet, a so-called "second Jupiter", around a Sun-like star. We have also revealed in unprecedented detail the system of planet-forming regions around two-dozen young stars. The findings from these observations not only suggest that planets outside of our Solar System are different from those within it but also question the standard planet-formation scenario based on our Solar System.

The next step is the challenge of discovering "second Earths". A new high precision radial velocity spectrometer (IRD) for the Subaru Telescope is being developed. The planets discovered with IRD will be the best targets for direct imaging with the Thirty Meter Telescope (TMT).

This award is great encouragement for meeting these upcoming challenges. Again, I really appreciate this honor.

The 2010 Toray Science and Technology Prize was also awarded to another professor at NAOJ. Dr. Masanori Iye, professor at NAOJ and director of the Thirty Meter Telescope Project Office, received the award in 2011 for his joint achievements in the study of the early universe and the development of the laser-guide star adaptive optics system (Professor Iye Receives 2010 Toray Science and Technology Prize).