Installation of a Plaque Acknowledging Donors to the TMT-Japan Office 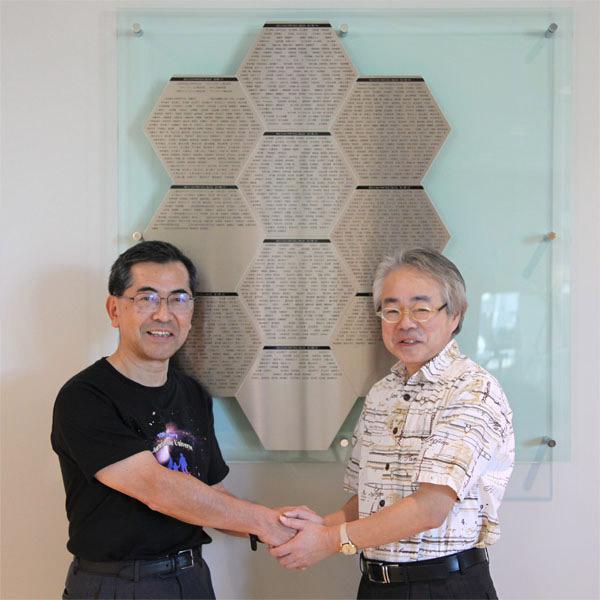 Figure: Plaque acknowledging donors to the TMT-Japan Office. The plaque measures 1.1 m X 1.1 m (43" X 43") and is composed of 10 hexagonal metal plates, inscribed with the names of 1583 individuals and 6 groups/institutions that gave donations to establish the TMT Japan Office. The design depicts the style of the segmented primary mirror of the TMT, and additional plates will be added as time goes by. (Credit: NAOJ)

TMT is a next-generation astronomical observatory that may begin scientific operations as early as 2022 on Mauna Kea, Hawaii. Composed of 492 mirror segments that combine to form the 30-meter primary mirror, TMT's enormous mirror will enable the telescope to achieve 4 times the resolution and 10 times the light-gathering power relative to the Subaru Telescope and other 8-meter class telescopes.

Japan is a partner country in the Thirty Meter Telescope Project, and the National Astronomical Observatory of Japan (NAOJ) has been a participating institution of the project since 2008. Professor Iye expressed his appreciation for the donors' contributions: "It is gratifying to see the names of so many donors, who have demonstrated their goodwill by supporting the TMT Project. TMT will surely generate a new vision of the Universe in the 2020s. It would be so rewarding if everyone in the world could share not only the excitement of the telescope's construction but also the promise of many new discoveries that it will bring us in the near future."

Subaru Telescope's power for making observations over a large area can provide astronomical targets that TMT can follow up with detailed observations. This is a particularly powerful combination for finding and studying some of the most distant galaxies in the Universe. Professor Arimoto summarized the significance of TMT to Subaru Telescope's current operation: "The powerful combination of the wide-field coverage offered by Subaru Telescope and the high sensitivity and spatial resolution of TMT will surely expand the horizons of human understanding of our Universe. I am committed to ensuring the smooth transition of this institution for operating two great astronomy facilities."