Public Information and Outreach (PIO) staff from Subaru Telescope played an integral role in Onizuka Science Day, a day focused on science and space exploration that has been held annually at the University of Hawaii Hilo for the past 14 years. In commemoration of the legacy of Astronaut Ellison Onizuka, who perished in the Challenger spacecraft explosion in 1986, this free event was open to students in grades 4-12, their parents, and teachers of any grade level and drew over 600 registrants from all over Hawaii Island ("the Big Island"). Its emphasis on engaging participants in the joy and satisfaction of scientific, technological, and space exploration aligned well with Subaru Telescope's commitment to community-wide STEM (science, technology, engineering, mathematics) education.

Subaru Telescope's display included large posters of the telescope, the day crews at work, and a depiction of gravitational lensing, all prominently resting on easels beside the exhibit table. Dr. Yuko Kakazu took pictures of interested guests on an iPad and then showed them how their own faces would be distorted if they were gravitationally lensed like far-away galaxies in images from the telescope. Meanwhile, Dr. Saeko Hayashi, Dr. Suzanne Frayser, and Ms. Rieko Murai staffed the main table, which was covered with beautiful postcards of the Subaru Telescope and its images, information cards about the telescope, colorful stickers, and small posters of Subaru's images ("cosmic fireworks") and ways of exploring the Universe. The free handouts became a catalyst for staff to engage visitors with stories about the telescope's operation, its observations, and scientific contributions. Children and adults alike enjoyed viewing their surroundings with the ever-popular, basic cardboard telescopes, which allowed them to experience the use of simple optics. Many interested children, parents, and teachers visited the display, which operated from 8 a.m. until 12:45 p.m. Mr. Teiji Chiba was on the move taking photographs of the display's activity as well as of the two workshops that Dr. Kakazu gave during the morning and afternoon. 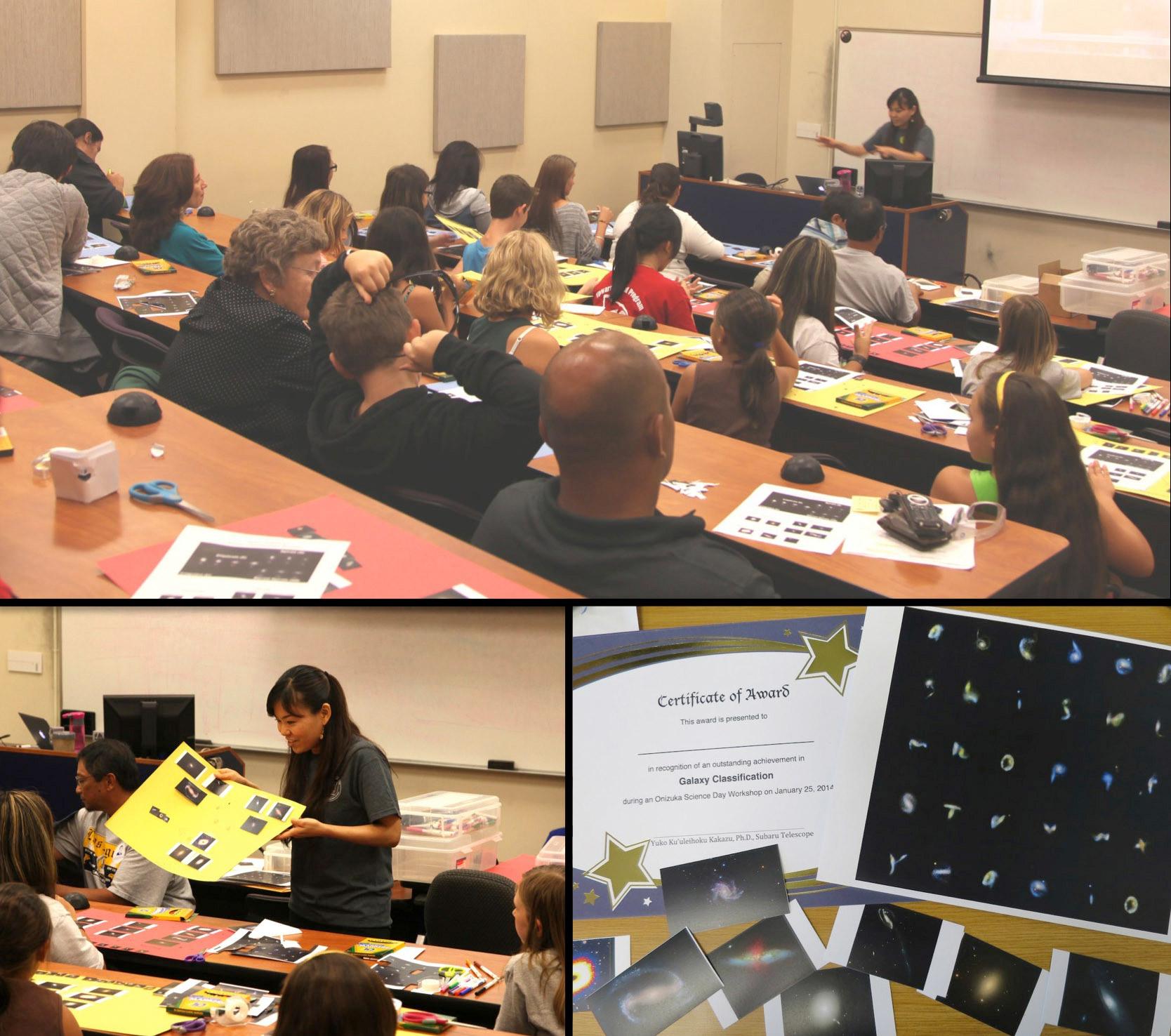 Dr. Kakazu's workshop, entitled "Let's Write Your Name with Galaxies", drew on her specialty of studying galaxies and encouraged the participants to learn how to classify them based on their appearance. Her creative approach to the workshop began with the participants composing their names from an alphabet of galaxies shaped like their namesake letters. After a brief introduction to astronomical time and galaxies, she asked the group to sort the galaxies pictured on a small pack of cards according to any criteria they chose. Discussion groups talked about their classifications and selected the best poster of galaxies created by one of their members. Creators of the best posters shared their names, favorite galaxies, and posters with the larger group and then received an award certificate in recognition of their special creation. Participants left not only with their posters but also with an expanded knowledge of galaxies.