Volunteering at the Visitor Information Station: The Human Face of Astronomy

Subaru Telescope has three Mauna Kea Visitor Information Station (VIS) Volunteer of the Year awardees on its staff: Dan Birchall (Subaru Observation System Associate), Josh Williams (Subaru Observation System Associate), and Josh Walawender (Instrumentation/Research Specialist). Dan is the 2013 recipient of the award, which recognizes not only his numerous hours spent volunteering but also his dedication to the overall volunteer program at the VIS.

Volunteers are a special group of people, who generously give their time and energy to help the Mauna Kea VIS reach its present and future goals. Their assistance includes participation in the free nightly stargazing programs, engaging with the public during free escorted summit tour programs, maintenance of the mountain trails, and involvement in other Mauna Kea-related outreach activities.

The award is a visible indication of the contribution that dedicated volunteers make, but its true value lies in the meaning that underlies their activities of service. Given their very busy lives, why do these volunteers carve out so much time to volunteer? And, how do their experiences benefit their work at Subaru Telescope?

All three awardees have a long history of volunteering in different ways. Although Dan Birchall "came to astronomy late", he had actively volunteered in other areas in the past. When he volunteered at the VIS, he felt a "childlike excitement about having found something cool and wanting to show it to someone." His volunteer experiences contrast with his previous work environment, where he sat in a cubicle with a computer all day, only communicating with people online rather than in person. He appreciates seeing astronomy in the wider contexts of the mountain's ecology and also sharing his knowledge and helping others in an engaging, personal way. 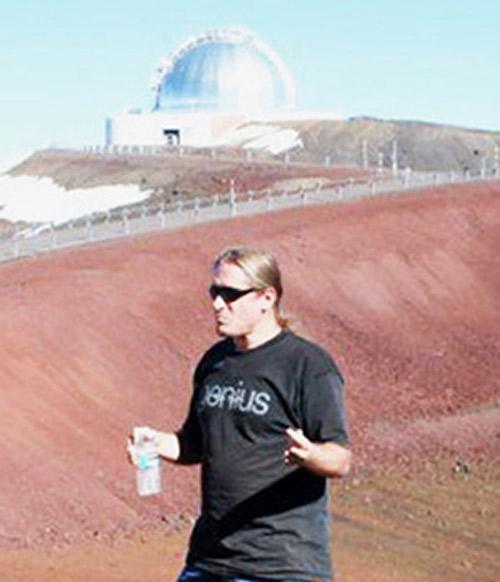 Josh Williams's enthusiasm for volunteering stems from the satisfaction he derived from getting to know people when he helped low-income people while he was in high school. Teaching people what he knows and doing away with misinformation fuel his efforts at the VIS. In addition, he feels joyful while using the telescopes for stargazing in the "pure" night sky at the VIS--quite a departure from the light-polluted skies of San Francisco, where he used to reside. As Josh puts it, "It's getting to inform people properly, correct misinformation, and bring them closer to home...It's a tiny slice of humanity up there, with people visiting from all over the world and all walks of life. To see that many stars up there will always drop a jaw." 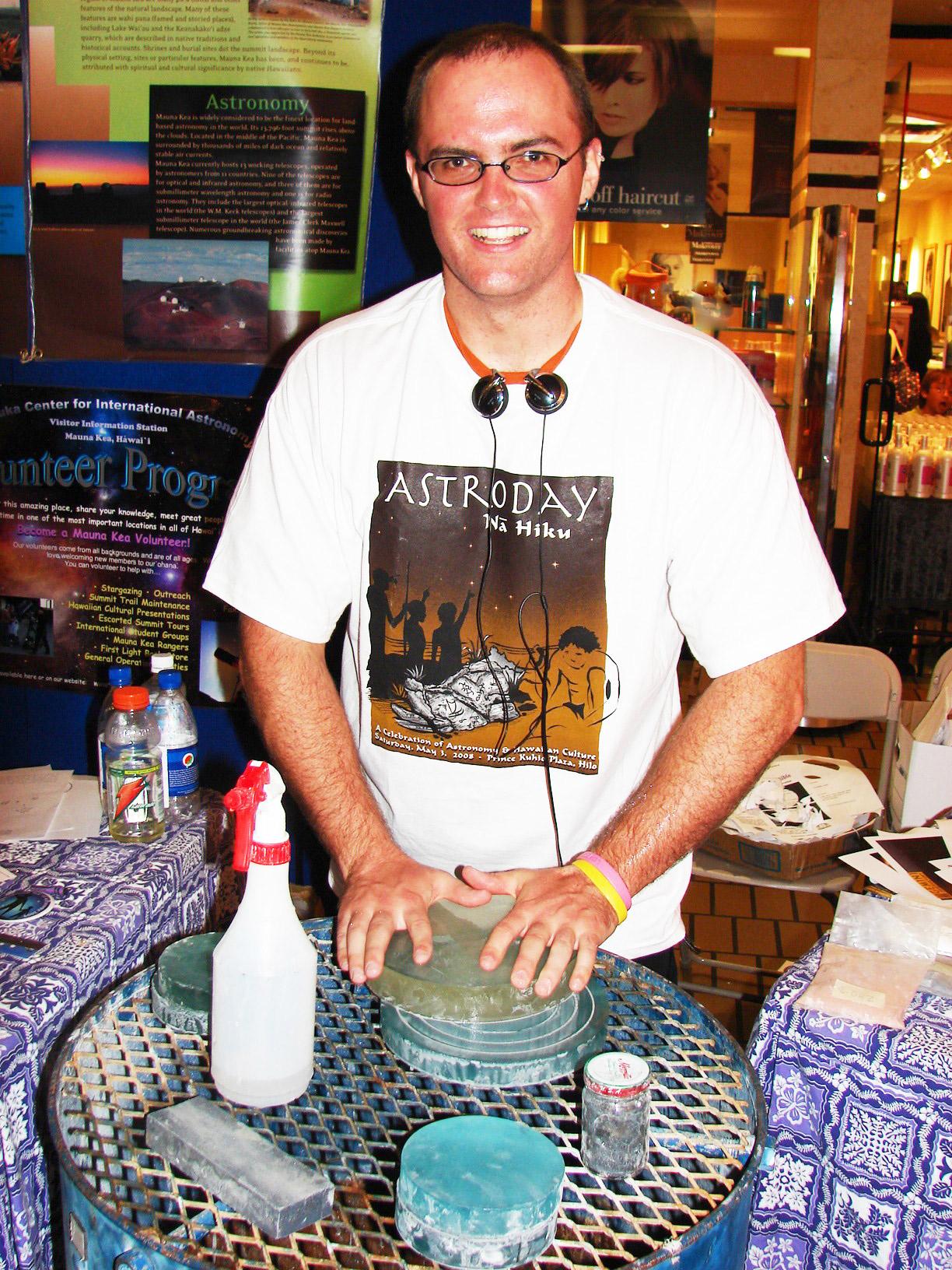 Figure 2: Josh Williams engaged in a fun activity at the VIS’s booth at AstroDay. (Credit: VIS)

Like Dan and Josh, Josh Walawender has a lot of volunteer experience. He's been an amateur astronomer and a volunteer since he was a kid. He goes up to Mauna Kea at least once a month with the Amateur Astronomy Club, and he particularly enjoys giving stargazing presentations to visitors--enthusiastic people who are genuinely interested in knowing about the night skies and the Universe. Part of his motivation for volunteering at the VIS stems from his feeling of responsibility as a professional astronomer to engage in public outreach. As he puts it, "We should tell people what we're doing, because most of science is a publically funded effort. My mission is communicating science to the public. We owe it to the people we serve." 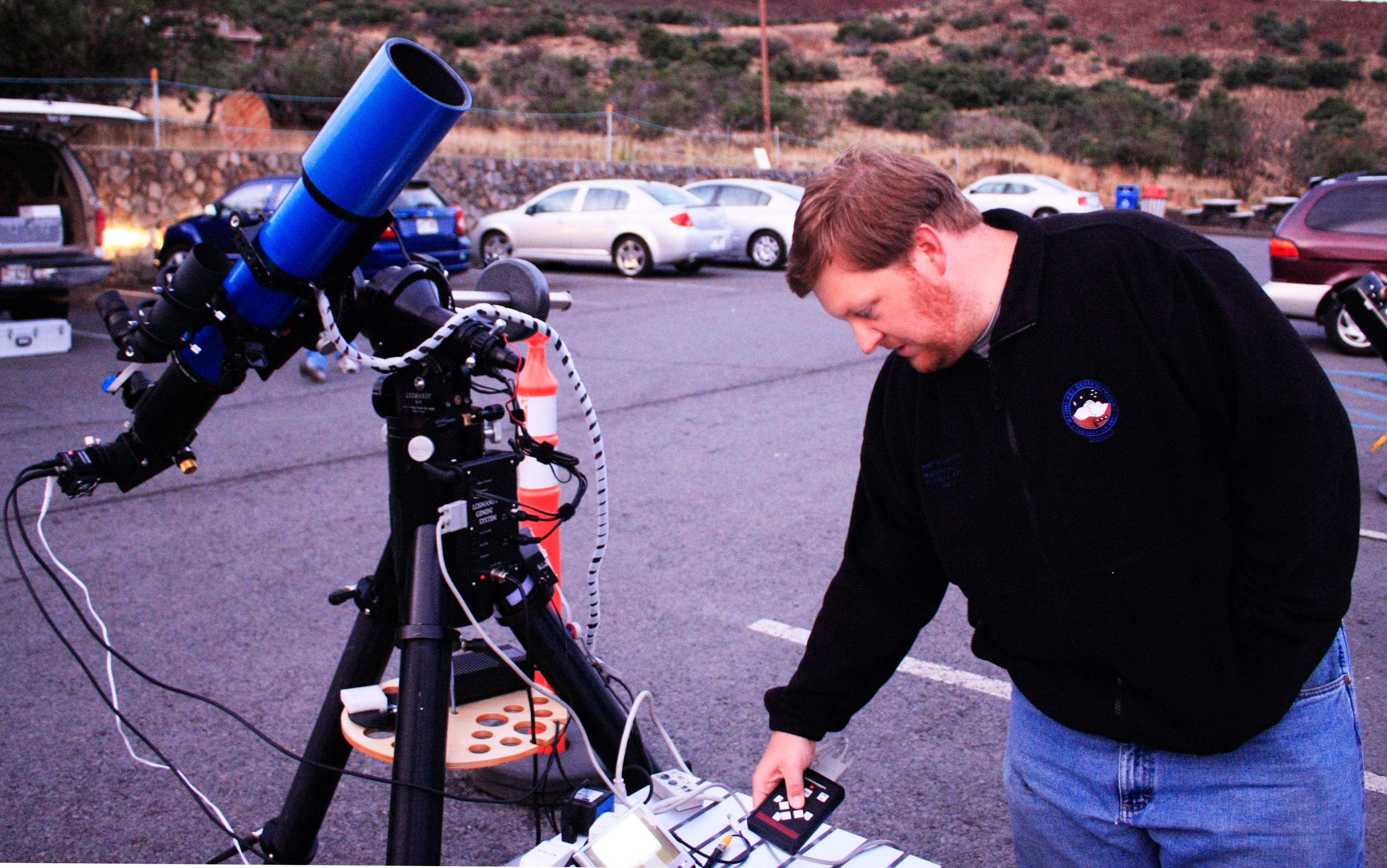 Volunteering not only benefits the volunteers and the visitors but also the local community and Subaru Telescope. Dan Birchall says that interfacing with the public allows him to give people up-to-date information about scientific discoveries with the telescope. He sees a "bigger picture" of what the mountain means to a wide range of people. He reflects, "The VIS is not astronomy per se but about the mountain as a whole. Working at Subaru, I can let people know what it's like to work "at the top"...As a volunteer and as a Subaru employee, it's about making the human race smarter, learning about the Universe."

Josh Williams sums it up like this: "Go stargazing! It's good for the mind! It's good for the heart! And it's good for the soul!" He also sees it as good for Subaru Telescope: "My work at Subaru feeds into volunteering. It's the "fuel" for giving me information to share with visitors, who can see that it's not a highly secretive, elitist thing that's going on up there. It helps the VIS when observatory staff are there to validate what they're doing. When you connect what you see up there with the people that are there, it's got a human face on it. When you can bring it home like that, it's put in a positive light and helps make it real."

Josh Walawender often talks about Subaru's findings to the visitors, who like to meet "a real, live astronomer" and want to know "what you guys are doing up there." Visitors' questions have made him more conscious of how detail-oriented scientists are and the importance of "keeping the big picture in mind." He sees his volunteer efforts as outreach for Subaru Telescope, because he helps people to understand what scientists do and how they run the telescope. And, it helps him with developing ways of writing clearly and communicating about changes in the telescope.

Overall, these awardees demonstrate that volunteering and outreach bring many rewards to them personally, for the community, and for Subaru Telescope. Congratulations to all!