During the early morning of November 15, 2013 (HST), a team of astronomers, led by scientists from Kyoto Sangyo University, used the High-Dispersion Spectrograph (HDS) mounted on the Subaru Telescope in Hawaii to successfully observe Comet ISON (C/2012 S1) immediately after the beginning of an outburst, when its brightness increased rapidly. The spectrum (Figure 1) showed a lot of gas emission lines from molecules and atoms, e.g., C2, NH2, H2O+, O, Na. These data play an important role in shedding light on the mechanisms that triggered Comet ISON's outburst. 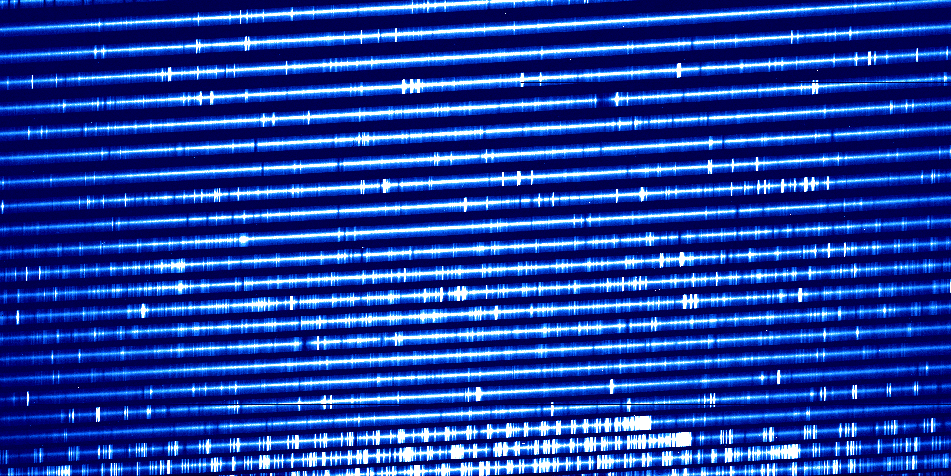 Figure 1: Raw data of the high-dispersion optical spectrum (called an "Echelle format") of Comet ISON, obtained by HDS mounted on the Subaru Telescope with an exposure time of 20 minutes. A lot of gas emissions e.g., C2, NH2, H2O+, O, Na, were detected in this spectrum. To compare these observational results with those of Comet LINEAR (C/1999 S4), also obtained by HDS, go to the following link:http://www.naoj.org/Introduction/instrument/img/HDS_s4_2.jpg).

Although Comet ISON (C/2012 S1) was expected to quickly brighten as it approached the Sun in early November, the outburst did not occur until around November 14th (Universal Time), when its brightness rapidly increased tenfold or more within two days. (For more information, please refer to the web page of the Comet ISON Observing Campaign: http://www.isoncampaign.org/Present or to the English version of Seiichi Yoshida's website: http://www.aerith.net/comet/catalog/2012S1/2012S1-j.html) At that time, Comet ISON was about 0.7 astronomical units (AU, the average distance between Earth and the Sun) from the Sun, within Venus's orbit. However, the mechanisms that trigger such a dramatic outburst have not been clearly understood. The observations of a team of astronomers, led by scientists from Kyoto Sangyo University, may help unravel that mystery.

This observing team succeeded in making an observation of Comet ISON on November 15th (UT) with Subaru Telescope's HDS, immediately after its outburst. (Figure 2) 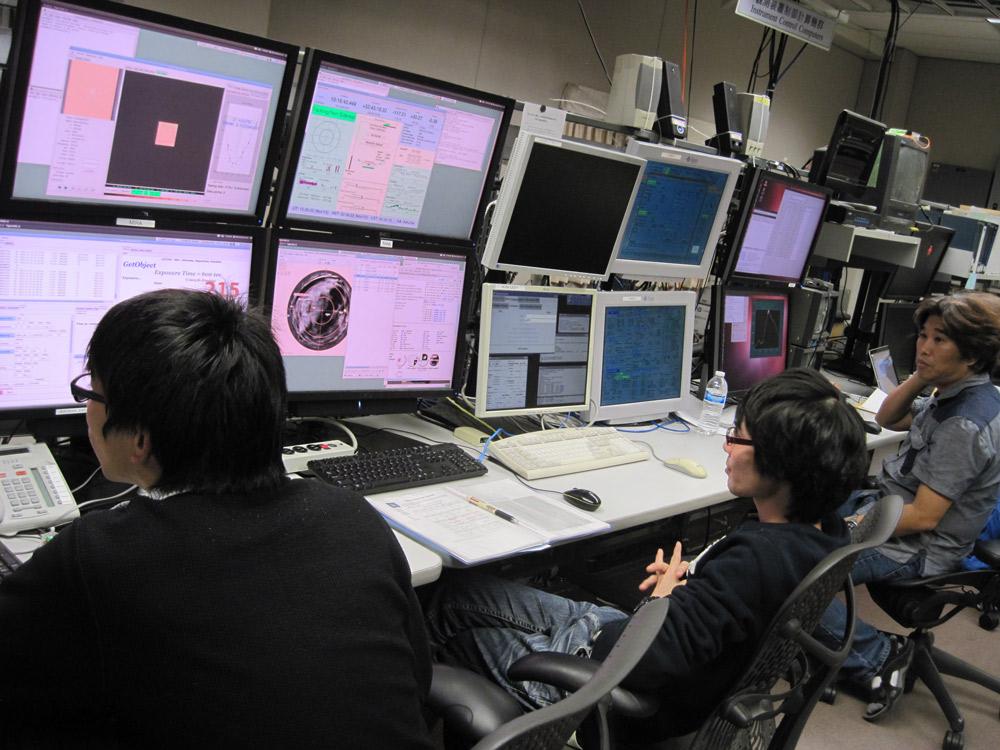 Figure 2: The team observing Comet ISON while they were monitoring unstable weather conditions, when a thin cloud frequently veiled the target.

The huge light-gathering power of the 8.2 meter primary mirror on the Subaru Telescope and the capability of HDS to precisely split light into its constituent colors with an accuracy of one part in 100,000, allowed the observers to gather precise information about the outburst. Despite a short exposure time and challenging conditions for the observation, e.g. slightly hazy weather and the comet's very low 20-degree angle of elevation, the observers obtained a highly accurate spectrum of the event (Figure 1), which showed many emission lines from gases such as C2, NH2, H2O+, O, and Na. The team expected that detailed analysis of the data would reveal the basis for the mechanism that triggered Comet ISON's outburst. (Figure 3) 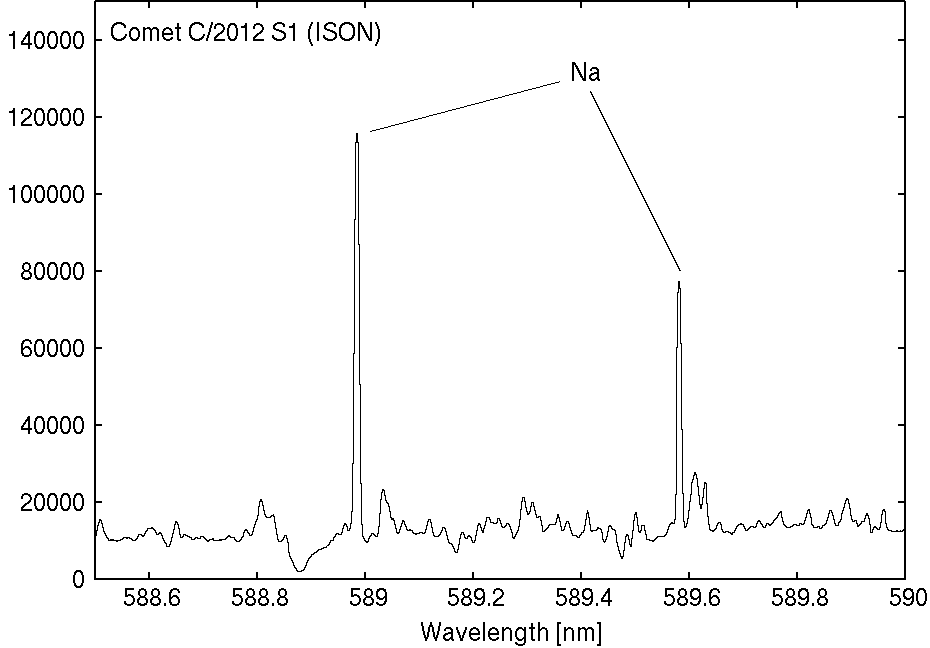 Figure 3: Part of the spectrum of Comet ISON. The horizontal axis displays the wavelength in nanometers [nm], while the vertical axis shows relative intensity in arbitrary units. Two strong sodium emission lines, labeled as "Na", were detected. C2 molecules account for most of the other weak lines. The continuum component that ranges over the entire wavelength shows the reflection of sunlight in the atmosphere from cometary dust around the comet, i.e, the comet's coma.

The two strong sodium lines identified in the spectrum might be clues for understanding the sudden increase in the comet's brightness. Until now, scientists thought that the evaporation of cometary dust might release sodium vapor. However, the continuum shows the reflection of sunlight from cometary dust. Therefore, the strong sodium lines and weak continuum levels do not support the prevailing view of sodium formation in cometary coma and may provide new insight into how sodium vapor forms in cometary coma.

This team plans to pursue research on the origin of Comet ISON, the mechanisms that trigger an outburst, and the history of the Solar System by studying cometary molecules. 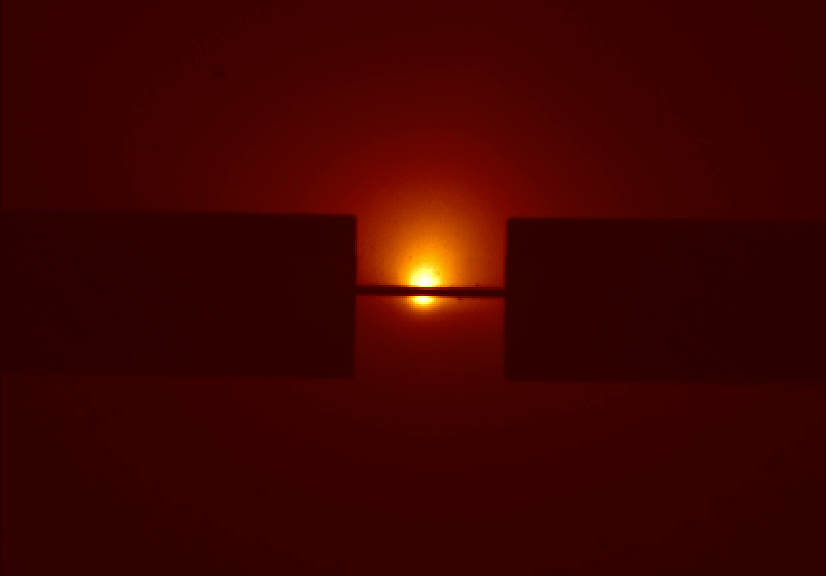