During an intensive commissioning run, Hyper Suprime-Cam (HSC), mounted at prime focus on the Subaru Telescope, has successfully imaged the Comet ISON (C/2012 S1) as it journeys toward the Sun. Especially striking in the HSC image are the comet's long tails, which span a distance more than twice the diameter of the full moon. (Figure 1) 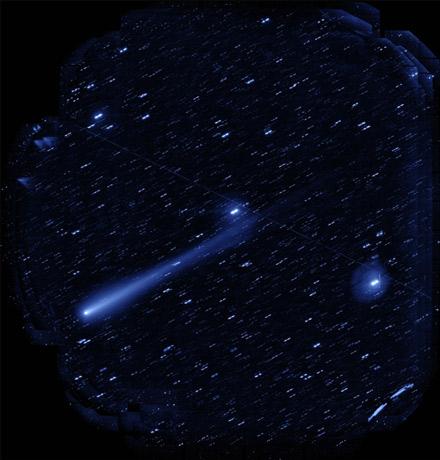 The observation took place in the early morning of November 5, 2013 in Hawaii during a test of non-sidereal tracking, which follows an object that moves at a different rate than the stars. Since Solar System objects such as comets and asteroids appear to move faster than more distant stars and galaxies, they require this special mode of telescope tracking, which allows observers to keep the target in view. An additional challenge for tracking Comet ISON was its low altitude of less than 30 degrees. Nevertheless, the commissioning team was able to capture a clear image of the comet and its tails, including their faint parts, which extend more than one degree away from the Sun. At the time of the observation, Comet ISON was 170 million kilometers from the Earth and 130 million kilometers from the Sun.

This image demonstrates some of HSC's exceptional qualities: use of the large, light-collecting power of the Subaru Telescope's 8.2-m primary mirror, a wide field-of-view, and sharp imaging capability. HSC's wide field of view captures objects in an area equivalent to the size of 9 full moons in one frame and does so with high sensitivity. This extraordinary instrument, first installed on August 16-17, 2012 (Hyper Suprime-Cam Ushers in a New Era of Observational Astronomy), was the product of international collaboration among major research partners -- the National Astronomical Observatory of Japan (NAOJ Japan), Kavli Institute for the Physics and Mathematics of the Universe (Kavli IPMU, Japan), the School of Science at the University of Tokyo (Japan), KEK (High Energy Accelerator Research Organization, Japan), Academia Sinica Institute of Astronomy and Astrophysics (ASIAA, Taiwan), Princeton University (U.S.A) -- and with outstanding companies from industry -- Hamamatsu Photonics K.K., Canon Inc., and Mitsubishi Electric Corporation.

Dr. Satoshi Miyazaki, an associate professor at NAOJ and the director of the HSC Project, conducted this commissioning run and summarized some of the process: "In order to verify the performance of this camera with a Solar System object as a target, we decided to observe Comet ISON. This kind of object is tricky to track. Despite the challenges of tracking this comet, we were very happy to see the tails clearly shown in the image. We are delighted that we can share this image, which proves that HSC is capable of capturing images of Solar System objects."

Dr. Jun-ichi Watanabe, the Deputy Director General of NAOJ and an expert on cometary research, praised this recent achievement of the HSC team by commenting, "This image clearly shows the power of HSC on the Subaru Telescope. The two distinct streaks of the tails might be from their dust and the gas, respectively. I am excited that this comet and its tail might be seen with binoculars or even with the naked eye."