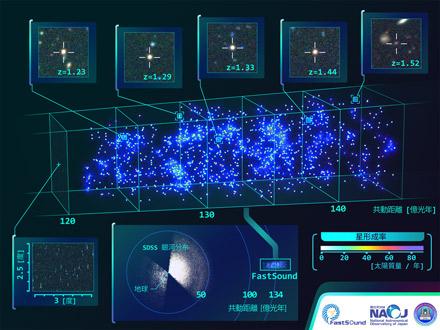 Figure 1: The FastSound Project's 3D map of the large-scale structure of a region in the Universe about 4.7 billion years after the Big Bang. This area covers 2.5 times 3 degrees of the sky, with a radial distance spanning 12-14.5 billion light years in comoving distance or 8-9.6 billion light years in light travel distance (Note 3). The colors of the galaxies indicate their star formation rate, i.e., the total mass of stars produced in a galaxy every year. The gradation in background color represents the number density of galaxies; the underlying mass distribution (which is dominated by invisible so-called "dark matter" that accounts for about 30% of the total energy in the Universe) would look like this if we could see it. The lower part of the figure shows the relative locations of the FastSound and the Sloan Digital Sky Survey (SDSS) regions, indicating that the FastSound Project is mapping a more distant Universe than SDSS's 3D map of the nearby Universe. (Credit: NAOJ, SDSS, CFHT)

Movie: Shows 3D distribution of the galaxies. (Credit: NAOJ, part of the data provided by CFHT、SDSS)

The FastSound Project, one of Subaru Telescope's Strategic Programs, began its observations in March 2012 and will continue them into the spring of 2014. Although surveys with 3D maps of the Universe have been conducted on the nearby Universe (e.g., the Sloan Digital Sky Survey with coverage up to five billion light years away), the FastSound Project distinguishes itself by developing a 3D map of the far-distant Universe, covering the largest volume of the Universe farther than ten billion light years away (in comoving distance, Note 3). Subaru Telescope's FMOS facilitates the project's goal of surveying a large portion of the sky. FMOS is a powerful wide-field spectroscopy system that enables near-infrared spectroscopy of over 100 objects at a time; the spectrograph's location at prime focus allows an exceptionally wide field of view when combined with the light colleting power of the 8.2 m primary mirror of the telescope.

The current 3D map of 1,100 galaxies shows the large-scale structure of the Universe nine billion years ago, spanning 600 million light years along the angular direction and two billion light years in the radial direction. The team will eventually survey a region totaling about 30 square degrees in the sky and then measure precise distances to about 5000 galaxies that are more than ten billion light years away. Although the clustering of galaxies is not as strong as that of the present-day Universe, gravitational interaction will eventually result in clustering that grows to the current level.

The final 3D map of the distant Universe will serve a primary scientific goal of the project: to precisely measure the motion of galaxies and then measure the rate of growth of the large-scale structure as a test of Einstein's general theory of relativity. Although scientists know that the expansion of the Universe is accelerating, they do not know why; it is one of the biggest questions in contemporary physics and astronomy. An unknown form of energy, so-called "dark energy", appears to uniformly fill the Universe, accounting for about 70% of its mass-energy content and apparently causing its acceleration. Alternatively, a fundamental theory of gravity on cosmological scales may differ from that of general relativity, which reigns as the dominant theory of gravitation and spacetime. A comparison of the 3D map of the young Universe with the predictions of general relativity could eventually reveal the mechanism for the mysterious acceleration of the Universe.

1. The name FastSound stands for two important aspects of the project. Fast is short for FMOS Acceleration Sampling Test, which refers to the 3D map from the survey. Sound abbreviates Subaru Observation Understanding Nature of Dark energy, which relates more closely to the scientific purpose of the project, i.e., studying dark energy and its implications for the theory of general relativity. The scientific goal of the project is to test the theory of gravity on a cosmological scale for the first time. By examining the large-scale structure of the young Universe when it was about five billion years old, the project aims to shed light on the problem of dark energy and the accelerating Universe.
2. FMOS was constructed as a collaboration between the National Astronomical Observatory of Japan (NAOJ), Kyoto University, and the UK Science and Technology Facilities Council (STFC)
3. The meaning of distance. The expansion of the Universe gives rise to different definitions of what distance means. The 3D map shown in this release uses a measure of comoving distance rather than light travel distance. Light travel distance refers to the time that has elapsed from the epoch of the observed distant galaxy to the present, multiplied by the speed of light. Since the speed of light is always constant for any observer, it describes the distance of the path that a photon has traveled. However, the expansion of the Universe increases the length of the path that the photon traveled in the past. Comoving distance, the geometrical distance in the current Universe, takes this effect into account. Therefore, comoving distance is always larger than the corresponding light travel distance.