Seeking New Planets, New Life, and New Ways to Search for Them

During the evening of February 23, 2013 in a large classroom of the University of Hawaii at Hilo's (UHH) Science and Technology building, Subaru Telescope astronomer Dr. Olivier Guyon took the audience on a journey of exploration--for new planets, new life, and new ways for the public to participate in the search. Jointly sponsored by the University of Hawaii at Hilo and the Subaru Telescope, Guyon's presentation posed questions that have fascinated him since he was a ten-year-old boy: Are we alone in the Universe? Where are habitable planets? Is there life on other planets, and, if so, what kind of life? And, finally, how do we develop the technology to find them? 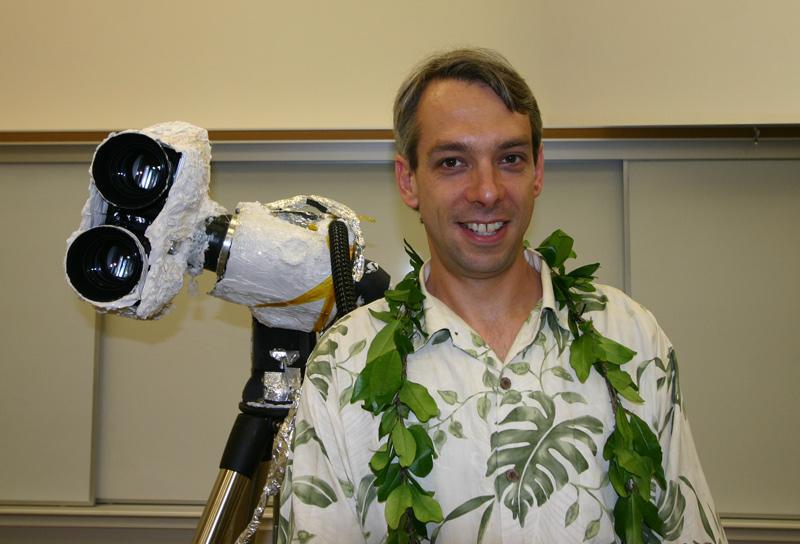 Figure: Dr. Olivier Guyon with the prototype of a robotic camera for "citizen scientists" (Credit: NAOJ)

Guyon led the audience along an interesting path of how to answer these questions and participate in the adventure of finding exoplanets, which are planets orbiting stars outside of our Solar System. The Universe contains billions of stars, and each star has a habitable zone where a planet and life could form. So "there are almost endless possibilities for life in the Universe." But to support life as we know it, the planet must be the right composition (rocky), size (not too big or small), and distance from its star (not too close or far away). The pace of discovering new planets (over 800 to date) is accelerating, but most are discovered indirectly, without an image of the planet. Guyon's research at Subaru Telescope, the University of Arizona, and NASA's Jet Propulsion Lab (JPL) may change that. He wants to directly image exoplanets, because the search for life cannot take place without it. Light reflected from the planet is a necessary component for spectroscopic observations, which are used to determine the chemical composition of planets and the possibility of life.

Guyon's creative work in developing instruments that could directly image exoplanets received recognition from the MacArthur Foundation, which gave him one of its prestigious "genius grants" in 2012. He already has plans for using the grant to involve the public in the search for exoplanets, which become candidates for direct imaging. Dubbed Project PANOPTES (the Panoptic Astronomical Networked OPtical observatory for Transiting Exoplanets Survey, http://www.projectpanoptes.org), he and his collaborators hope to provide a low-cost, reliable digital/robotic camera that "citizen scientists" and amateur astronomers can assemble and use to scan the night sky and take images of objects to detect a planet transiting a star. His prototype of the robotic camera is already mounted on Mauna Loa and yielding some well-resolved images of thousands of stars. And, they are developing the software to run the cameras and analyze the images. The next step is to build more units and establish a global network of robotic cameras, run by amateur astronomers and schools for twenty-four hour coverage. By lowering the cost of the camera and giving the public an affordable way to search for planets, scientists and the community can collaborate in this exciting search for life on other planets. What then? One of the audience members asked what he would do if he did find life on another planet. "I don't know," he said with a smile. "I'm open."