Dr. Nobuo Arimoto, Director of the Subaru Telescope, gave a presentation entitled "Subaru's Universe: Global Warming and a Voyage to Other Planets" at the Lyman Museum in Hilo, Hawaii on December 10, 2012. This was the first time that a representative of one of the observatories on Mauna Kea has participated in the museum's lecture series, and it was Director Arimoto's first English presentation to the public in Hilo. The museum includes a restored 1839 Mission House as well as a building housing a collection of Hawaiian artifacts, fine art, and natural history exhibits; it is affiliated with the Smithsonian Institution. The organization sponsors an ongoing lecture series that addresses topics of interest to the local community. 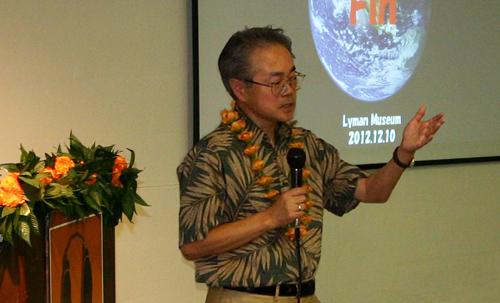 Dr. Barbara Moir, Deputy Director of the Lyman Museum, introduced Director Arimoto to a diverse audience whose familiarity with astronomy varied from scant to knowledgeable. He began his presentation by introducing the group to the Subaru Telescope on Mauna Kea. When he described the 8.2 m telescope, the audience literally gasped in amazement at its huge size.

Director Arimoto further engaged the audience with a mixture of images, scientific narrative, and humor. He showed beautiful, detailed images of stars within distant galaxies from his own research using the Subaru Telescope. He shifted his presentation back to Earth by explaining the dramatic consequences of global warming for this planet. He conjectured that the world's population would need to relocate to another planet if the Earth becomes uninhabitable.

Where would a habitable planet be? Taking the audience on a tour of the Solar System, he noted that no place in our Solar System would meet humanity's need for relocation. However, a planet orbiting Alpha Centauri, the star nearest to Earth, might be a possibility, if the planet were at a habitable distance from the star and was the right age. "Talking story" about this imagined scenario served as a context to inform the audience about the nature of our Solar System, requirements for the emergence of life, and the importance of preserving Earth's precious resources.