Hyper Suprime-Cam Ushers in a New Era of Observational Astronomy

The installation of Hyper Suprime-Cam (HSC) onto the Subaru Telescope took place on August 16-17, 2012. The availability of this extraordinary new instrument marks the beginning of a new era in observational astronomy and is a testament to the fruits of international collaboration. The 3-ton, 3-meter (9 feet) high instrument mounted at prime focus contains 116 innovative, highly sensitive CCDs. HSC's 1.5 degree wide field of view (FOV) substantially increases the Subaru Telescope's FOV beyond that available with the present instrument (the Subaru Prime Focus Camera, Suprime-Cam) by seven times.

Its development has been a science-driven and technologically innovative process targeting the need to address current scientific questions: What are the parameters and properties of dark energy and dark matter? What is the cause of the accelerating expansion of the Universe? HSC can conduct surveys that will provide fundamental data sets for cosmology-related research. Dr. Satoshi Miyazaki, director of the HSC Project, enthused, "HSC is a dream machine for deciphering the mystery of elusive dark energy... Who knows what kind of entirely new phenomena or objects might emerge from this kind of survey?" 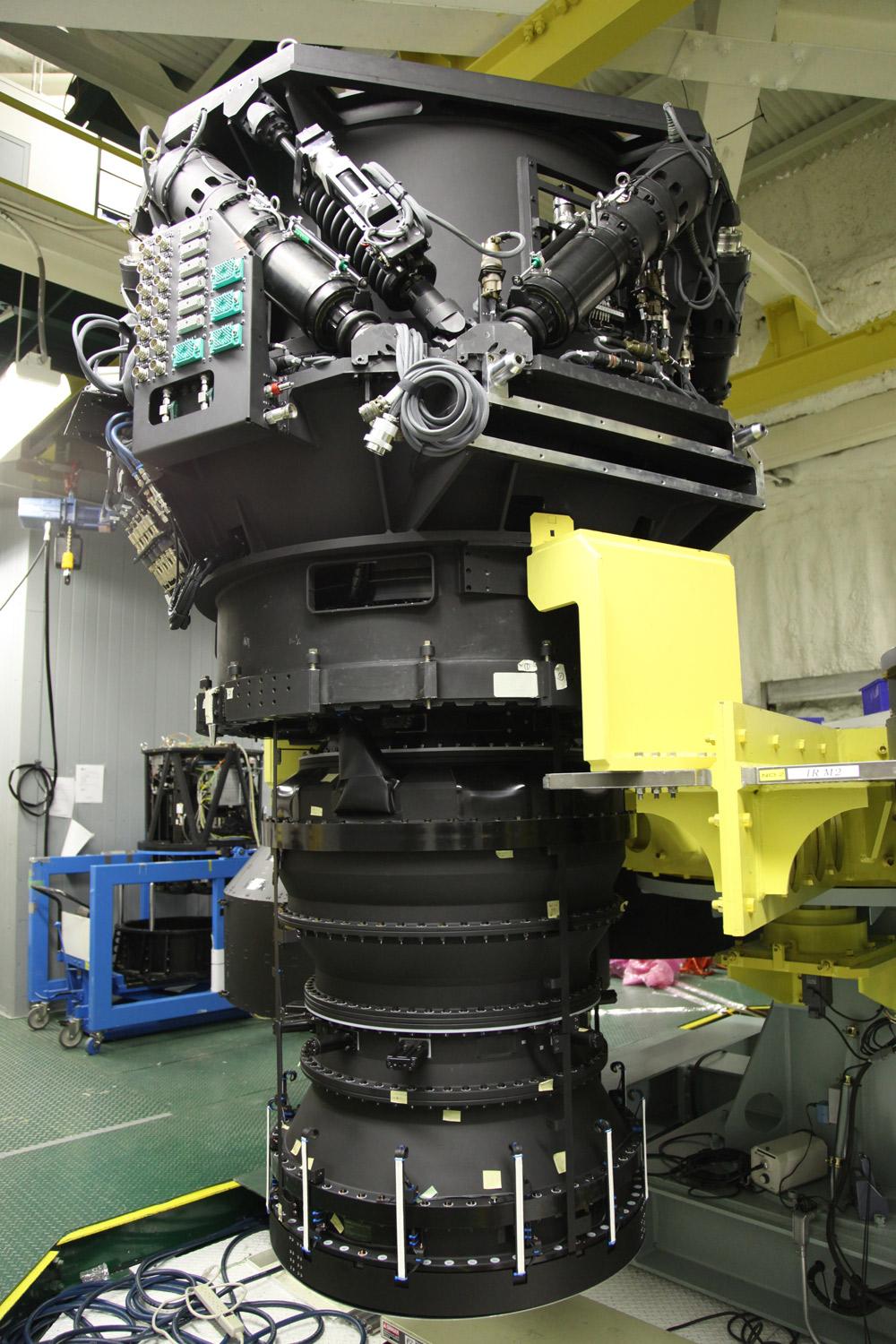 As early as 2002, researchers at the National Astronomical Observatory of Japan (NAOJ) envisaged a new instrument that would probe the Universe with a much wider field of view than Suprime-Cam's and be able to address new scientific challenges that current technology could not tackle, e.g., defining the true nature of dark energy. Based on the previous performance of the telescope, they knew that the Subaru Telescope could meet the requirements for this type of research: 1) a large field of view, 2) good image quality, and 3) the capability to handle huge amounts of data quickly while maintaining their integrity.

The HSC Project was established by 2008. Thanks to the combined efforts of the major research partners -- NAOJ (Japan), Kavli Institute for the Physics and Mathematics of the Universe (Kavli IPMU, Japan, from 2007), the School of Science at the University of Tokyo (Japan), KEK (High Energy Accelerator Research Organization, Japan), Academia Sinica Institute of Astronomy and Astrophysics (ASIAA, Taiwan, from 2005), Princeton University (U.S.A., from 2007) -- and the expertise of collaborators from industry -- Hamamatsu Photonics K.K., Canon Inc., Mitsubishi Electric Corporation -- the conceptualization of HSC in 2002 has become a reality in 2012.

HSC is an enormous instrument weighing 3 tons and standing 3 meters (9 feet) high. Its main components facilitate observations that can capture high-resolution images of faint objects in the far distant Universe to meet the challenging scientific goals of investigating the parameters and properties of dark energy and dark matter.

Technological breakthroughs incorporated in HSC align with these objectives, and advanced technology has been integral to the completion of the project. Collaboration between astronomers and industries developing innovative technology enabled the development of some of HSC's main components. 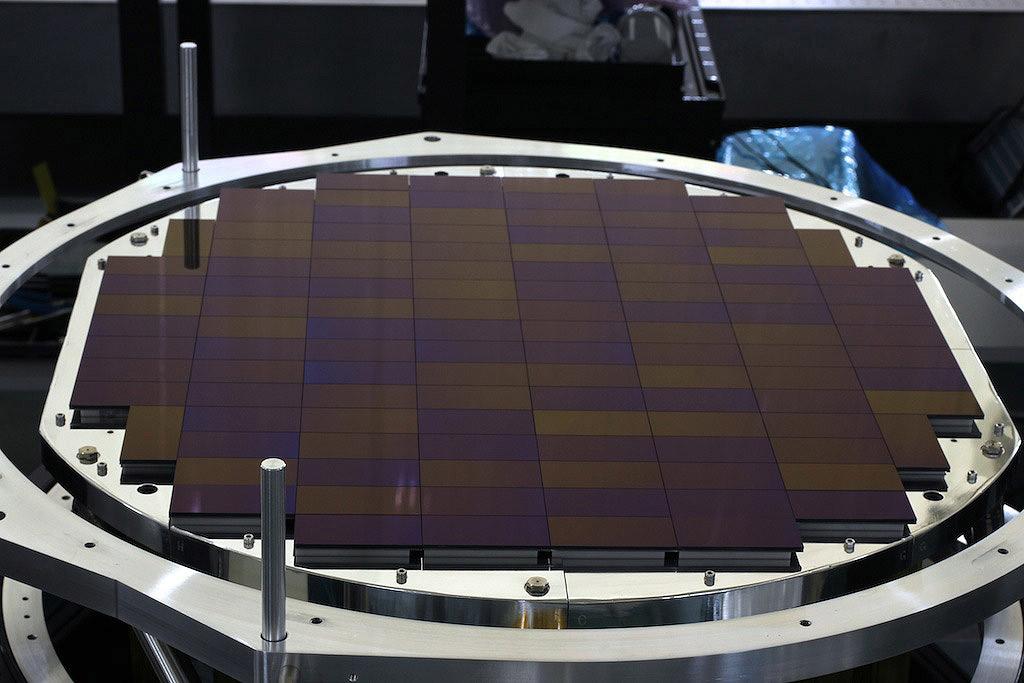 The Wide Field Corrector (WFC) Canon Inc. developed the set of seven lenses that compose the Wide Filed Corrector, which corrects for optical aberrations and atmospheric dispersion that distort images from the primary mirror, located 15 meters below the camera. These lenses produce the world's sharpest images captured from astronomical observations using this class of corrector lenses; their high optical quality delivers an image that is better than 0.2" (arc seconds) on the focal plane, the flat surface on which the image appears. Kyocera Corporation developed a low expansion material for making the ceramic lens barrel holding the assemblage of lenses, which is not only resistant to temperature changes but is also lightweight. 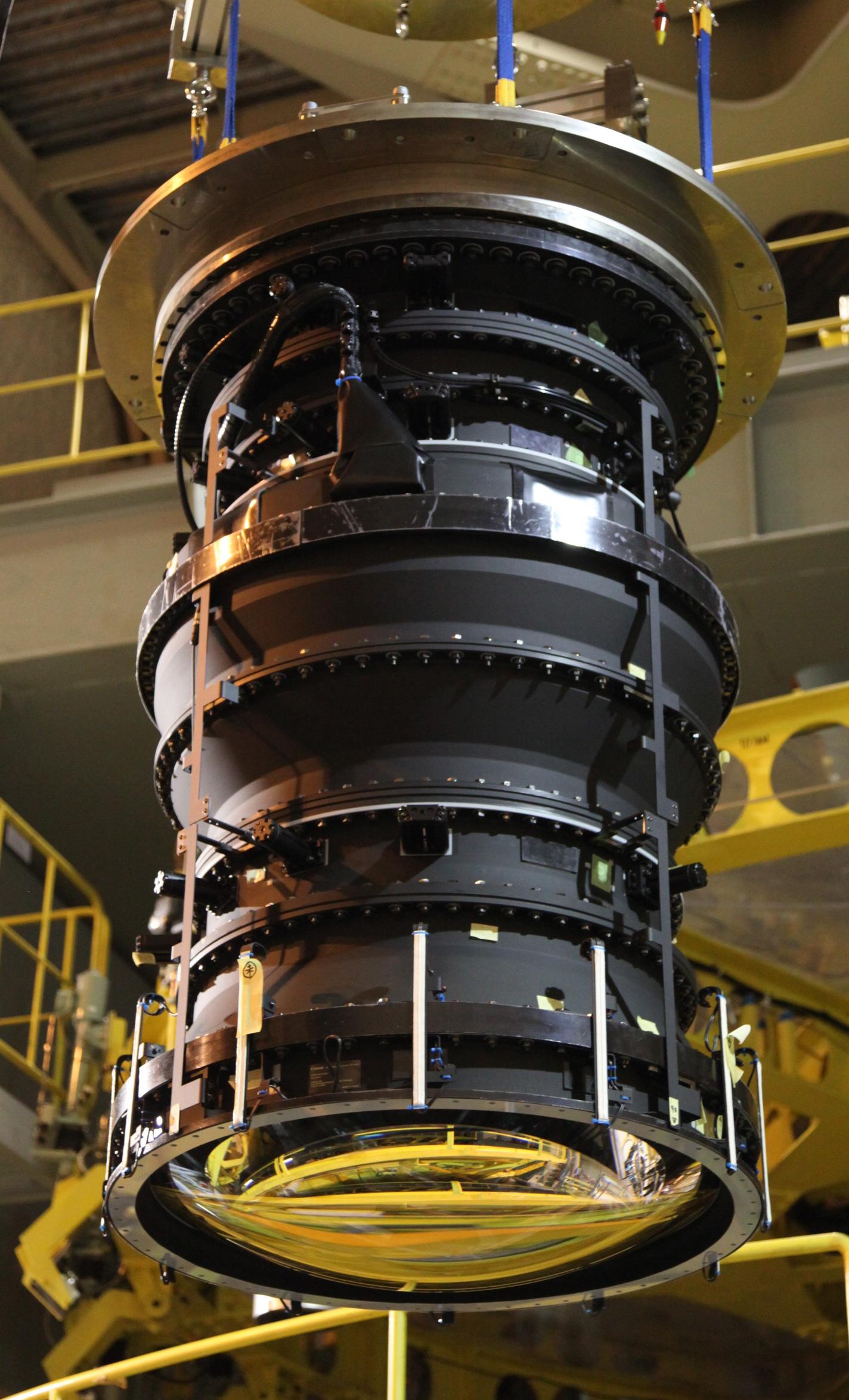 A New Prime Focus Unit (PFU, POpt2) Mitsubishi Electric Corporation developed both the driving mechanism and the chassis that holds the camera and the WFC. It is mounted at the center of the top ring of the telescope. Special mechanisms (Hexapod jacks) installed on this unit precisely control its position, attaining adjustments as small as 1-2 microns (1/100 the width of a human hair) to ensure accurate focusing of the 3-ton instrument. 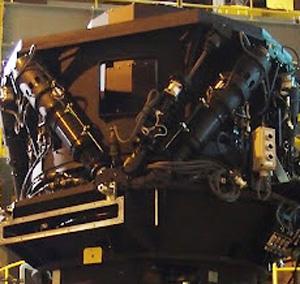 After HSC's installation, its weeklong performance testing was successful. Dr. Miyazaki, the director of the HSC Project, recalls the exciting moment when the team saw HSC’s first image of a stellar object: "Since there was a thin layer of clouds above the telescope, I chose Vega, a bright star in the summer sky. At first we saw nothing, but after readjusting the telescope settings, a bright spot appeared at the bottom left of the image! With the support of many organizations and professionals, the HSC project has reached a major milestone." 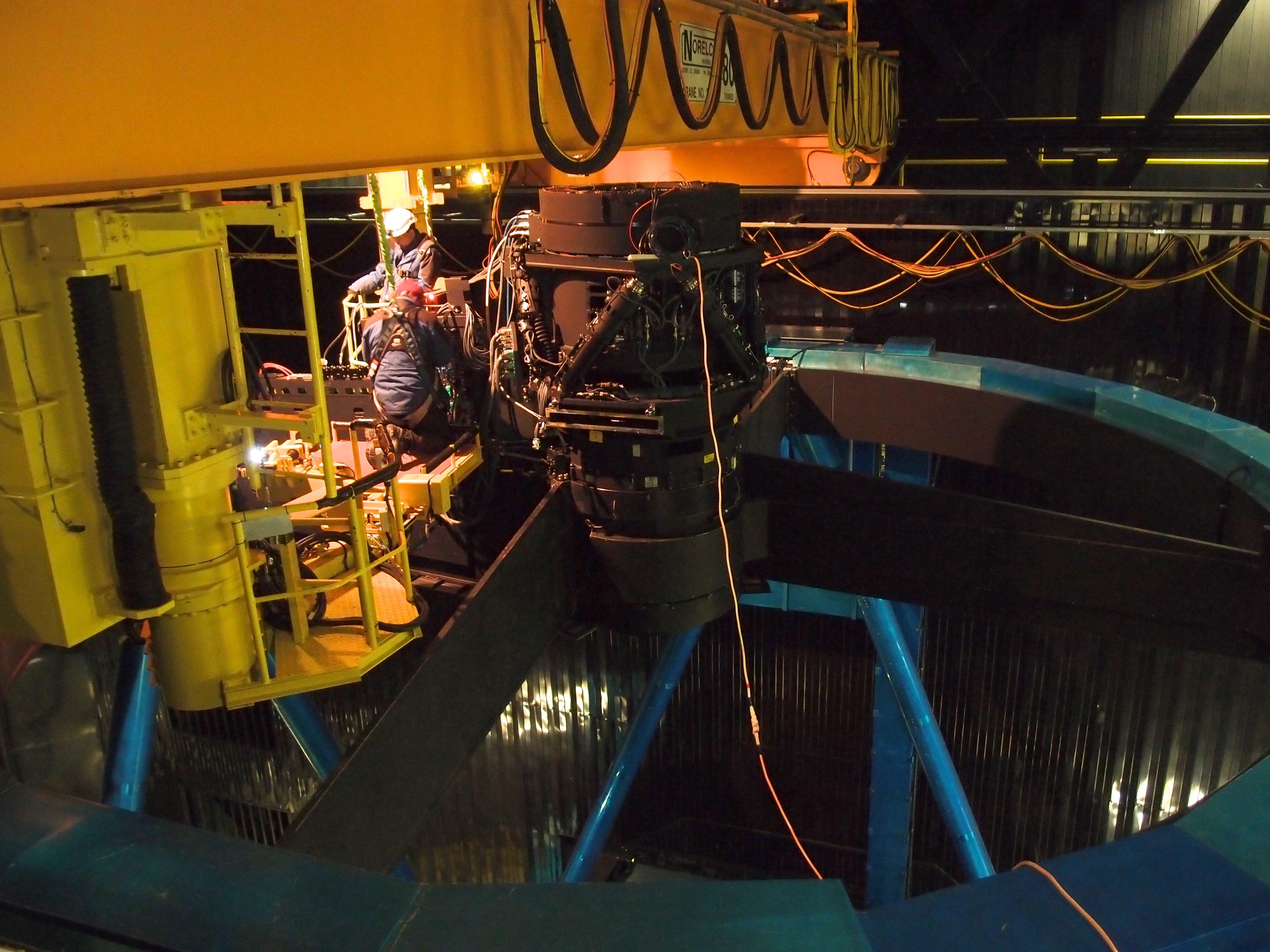 Figure 5: Installation of HSC. A close-up of the physically challenging area where installation of HSC takes place at prime focus in the center of the top ring of the telescope. (Credit: NAOJ)

Video: Installing HSC. Click on the figure to activate a short video of the installation process. (Credit: NAOJ) 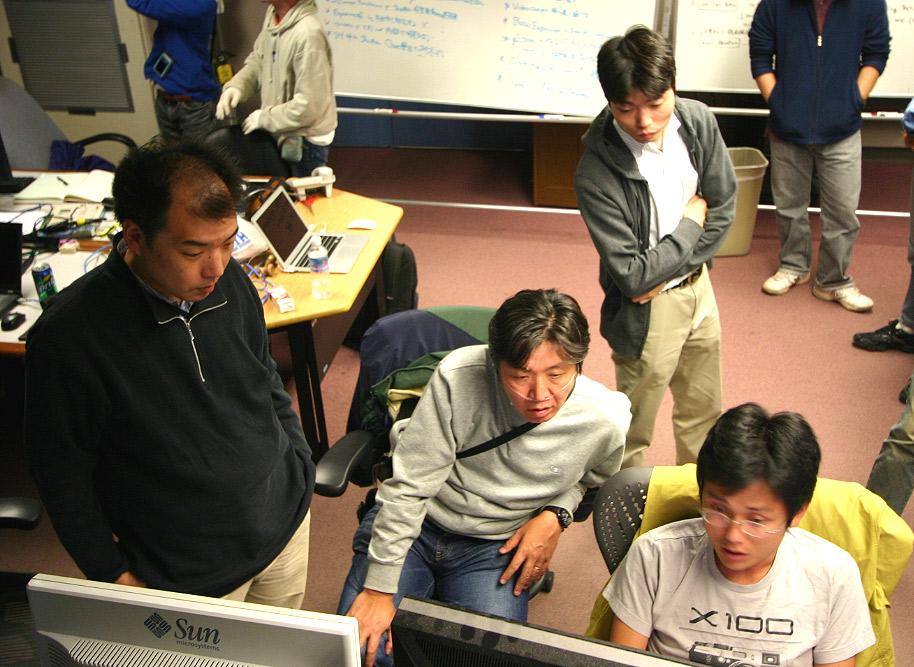 Figure 6: Astronomers in the observation room of the Subaru Telescope carry out performance tests of HSC. (Credit: NAOJ)

Lessons Learned from Development and Installation

As with the development of any instrument, a balance occurs between scientific objectives and the practicalities of design, installation, and usage. The desired observational capabilities of the instrument had to interface with the existing structure of the Subaru Telescope. The framework of the telescope was modified so that HSC would fit in the inner top ring of the Subaru Telescope. The huge size and weight of HSC presented a number of mechanical challenges for installation. Changes made to accommodate the enormous instrument include: upgrade of the top unit exchanger, a new control system, and adjustment of the telescope's balancing mechanism to accommodate the heavier load at the top unit. The advantages of HSC's power and the enormous amount of data it can collect bring with it the need for faster and automatic data processing, an issue that Princeton University and Kavli IPMU have addressed.
The social context for HSC's development involved teamwork and flexibility. The instrument is a product of collaboration between astronomers from different countries; between astronomers and industrial developers; and between colleagues within NAOJ and the Subaru Telescope organization.

The Scientific Promise of HSC

HSC offers a large field of view, high resolution imaging, and an increase in its range of scientific applications, and scientists recognize the power of that combination. Dr. Masahiko Hayashi, Director General of NAOJ, proudly emphasized, "Subaru Telescope has a distinct advantage with instruments at prime focus that allow an otherwise difficult pairing of a wide field of view with detailed spatial resolution. HSC will surely reveal uncharted areas of the Universe. Imagine billions of galaxies in an image!" Dr. Hitoshi Murayama, director of Kavli IPMU asserted: "In order to understand the evolution and the fate of the Universe, we need to conduct a census, studying billions of objects to extract the overall trend. No current telescope other than the Subaru Telescope can satisfy the requirements for such large-scale survey: a wide field of view, superb image quality, and a large mirror. HSC is an ambitious foray of Subaru Telescope into a world-class survey of the Universe. HSC and a new spectrograph will be integral parts of the Subaru Measurements of Images and Redshifts Project. It is clear that Subaru is now leading the way forward with observational cosmology."
Since HSC positions Subaru Telescope to meet the next generation of scientific challenges, its developers and astronomers alike look forward to using it. As Dr. Miyazaki thought of HSC's promise, he said, "Now I can start thinking about the images of objects that we can capture with HSC. This is the beginning of many observational runs to come. I hope to see a variety of researchers use HSC. The survey data that we create will amplify and enrich our understanding of the Universe."
Funding for the HSC Project was provided in part by the following grants: Grant-in-Aid for Scientific Research (B) (ID 15340065); Grant-in-Aid for Scientific Research on Priority Areas (ID 18072003); and Funding Program for World-Leading Innovative R&D on Science and Technology (FIRST) entitled, "Uncovering the Origin and Future of the Universe-ultra-wide-field imaging and spectroscopy reveal the nature of dark matter and dark energy"