A New Home for Subaru Telescope's Banner from Outer Space

The banner that Subaru Telescope prepared for Japanese astronaut Dr. Koichi Wakata to carry with him aboard the Space Shuttle Discovery has had quite a journey since its creation. Its odyssey has included trips to Japan, Texas, outer space, and Hawaii. Most recently, Subaru Telescope transferred it to the `Imiloa Astronomy Center (`Imiloa) in Hilo, Hawaii for display in its exhibit area. 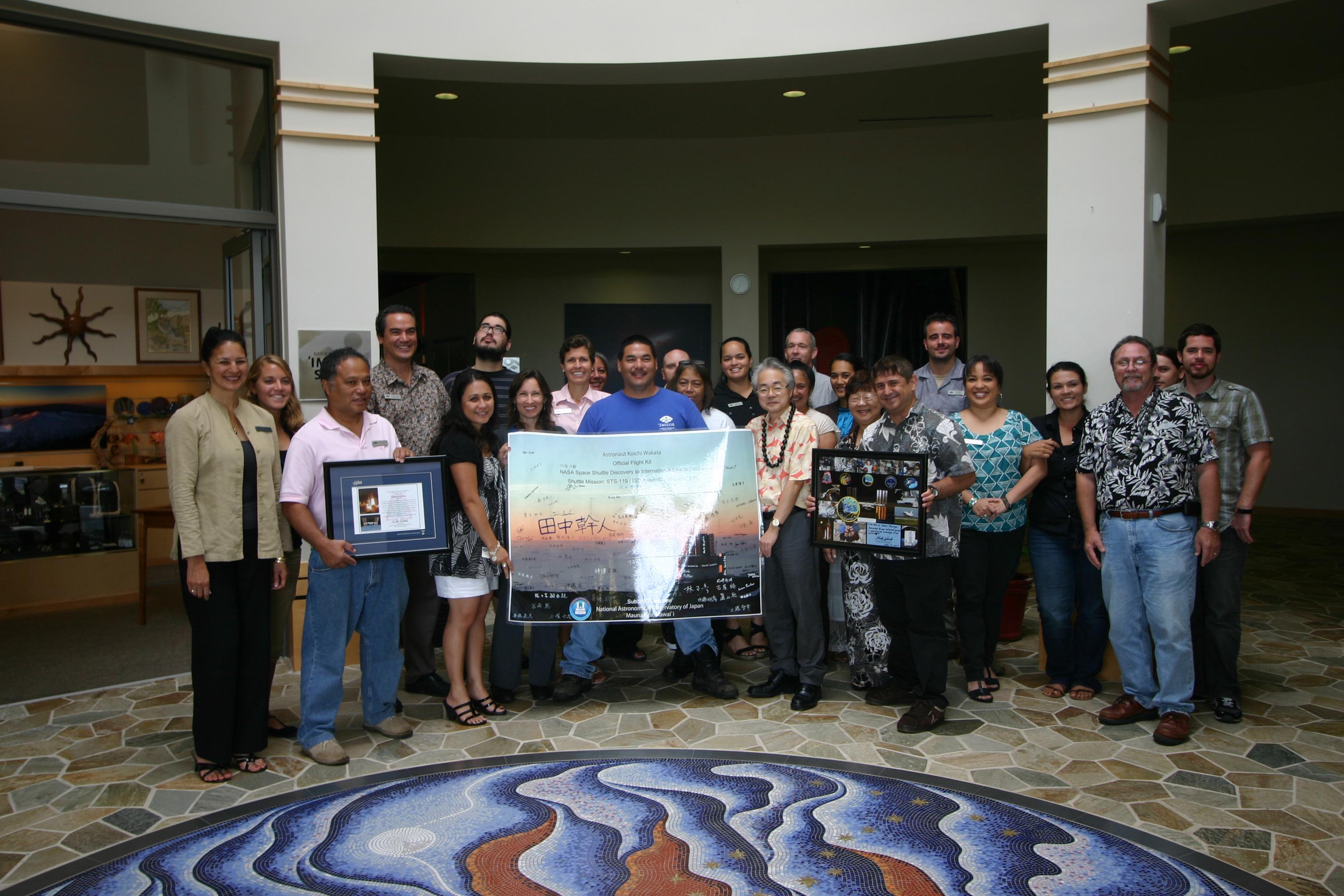 Development of the banner began when Dr. Wakata contacted Subaru Telescope to request a keepsake that he could take with him on his Space Shuttle flight to the International Space Station (ISS). It was destined to be one of the items included in the shuttle's Official Flight Kit (OFK), a container reserved for carrying official mementos of the National Aeronautics and Space Administration (NASA) and other organizations aboard Space Shuttle flights. Subaru Telescope then created a banner from a photograph showing the telescope's enclosure bathed in the soft glow of a sunset at Mauna Kea. Subaru Telescope staff in Hilo and those at its headquarters at the National Astronomical Observatory of Japan's (NAOJ) Mitaka Campus in Tokyo, Japan signed it in 2008 with good wishes for the astronaut's flight and three month stay at the ISS.

The Japan Aerospace Exploration Agency (JAXA) sent the banner to NASA, and then Dr. Wakata transported it as part of the OFK during his trip on the Space Shuttle Discovery in 2009. Now a veteran of three space flights, Dr. Wakata has been serving as the chief of the Astronaut Group of JAXA since 2010.

On May 17, 2011, Dr. Wakata presented the well-traveled banner, a Certificate of Authenticity, and an official mission flight patch to former Subaru Director Hideki Takami at the Subaru Telescope base facility in Hilo. Dr. Wakata repeated the presentation to Subaru Telescope as part of a special public lecture held at the `Imiloa Astronomy Center's planetarium during which he recounted highlights of his experiences while living on the ISS.

On July 25, 2012, Subaru Telescope's new Director Nobou Arimoto transferred all three items to `Imiloa's Executive Director Ka`iu Kimura in a ceremony at `Imiloa's atrium. Director Arimoto said that he was pleased to transfer the banner, the beautifully framed certificate and the flight collage for display at such a fine education center that focuses on the interface between astronomy and Hawaiian culture.

The items are on indefinite loan to `Imiloa, which will display them next to the entrance of the Four Dimensional Digital Universe (4D2U) Theater in the astronomy center's exhibit area. The theater uses a 3D projection system with special software to visualize the known Universe in programs such as a seven-minute presentation entitled "Voyage Through Space." The 4D2U Project of NAOJ, Subaru Telescope's parent organization, developed the system and has maintained it at `Imiloa since its installation there in 2006. The placement of the items at this location serves to symbolize the connection between NAOJ in Japan, Subaru Telescope in Hawaii, and the multicultural local as well as international scientific communities within which the telescope operates.

Like Dr. Wakata, an exceptional individual committed to space flight and to communicating with young people about the importance of space exploration, the journey of the banner as part of the OFK reminds us of the power of personal commitment and global collaboration in understanding the Universe. After a nearly two-decade career in space flight, Dr. Wakata will be the first Japanese commander of the ISS during Expedition 39 in 2013. `Imiloa Astronomy Center regularly raises awareness of the link between Hawaiian culture and astronomy. And Subaru Telescope continues to contribute major findings and innovative technology for exploring the Universe.