Hawaii is the only U.S. state where people can experience Lahaina Noon, the few moments when the Sun is directly overhead, and upright objects such as a flag-pole have no shadow. In the tropics, the Sun only passes overhead twice a year, usually in May and July. An astronomer at Subaru Telescope was fortunate to video the transition from shadows to no shadows during this special time in May.

Video: A demonstration of how shadows of the milepost in the courtyard of Subaru Telescope's base facility shift during Lahaina Noon. When the Sun crosses the meridian point (the highest point), the shadow of the milepost almost disappears. The video was taken between noon and 12:30 pm local time on May 15, 2012, three days before Lahaina Noon. (Credit: NAOJ) 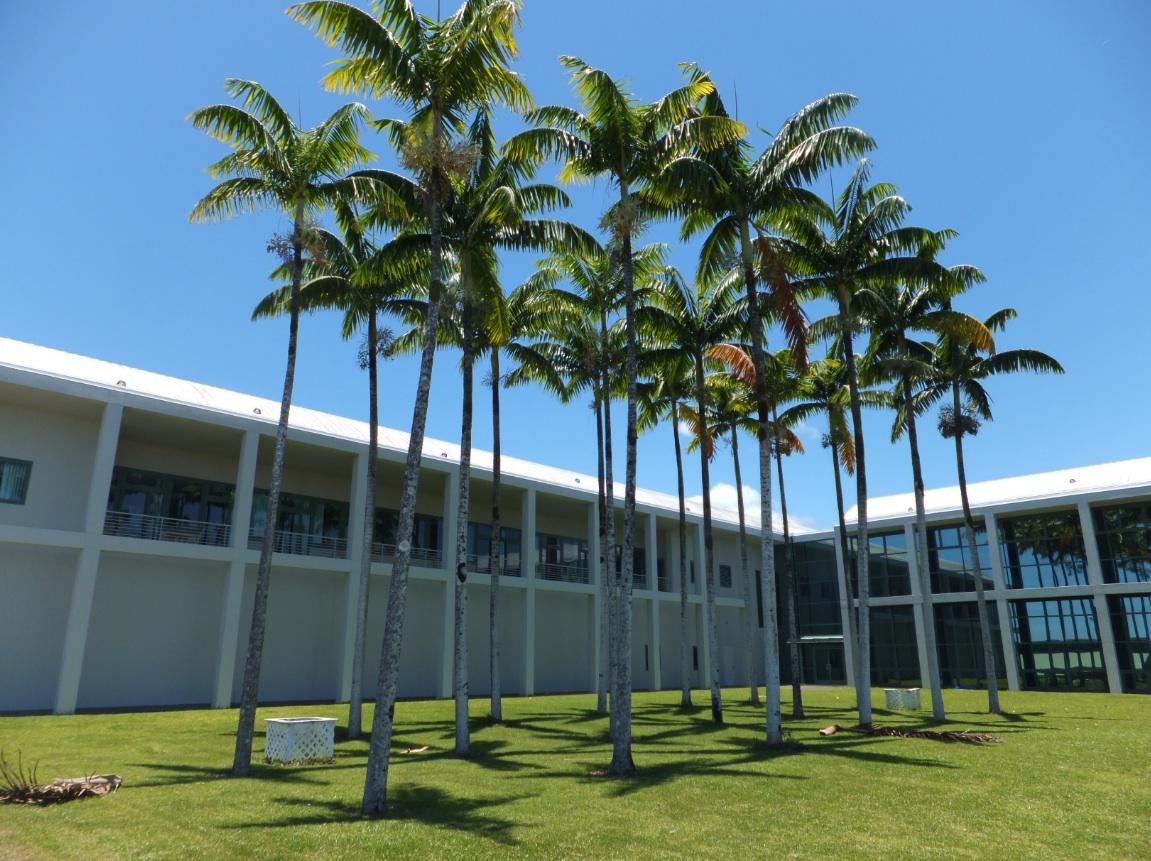 Figure: Palm trees in the courtyard of Subaru Telescope's base facility in Hilo. The trees are very tall, more than two stories high, but their shadows are short because Lahaina Noon is approaching. (Credit: NAOJ)

The Sun reaches its zenith in this area twice a year; in Hawaii this happens about a month before and after the summer solstice when the Sun is at the highest point in the sky around noon. This "overhead noon" is sometimes called "shadowless noon" or "zenith noon", but it became known as "Lahaina Noon" after the name was selected in the early 1990s following a naming contest at the Bishop Museum in Honolulu, Hawaii. The term selected was Lahaina, which derives from "la haina" and means "cruel sun" in the Hawaiian language. Early Hawaiians named the event "kau ka la i ka lolo", which literally means "the sun rests on the brains." (As written here, the Hawaiian words do not have the punctuation that reflects proper pronunciation.)

Because of the alignment of the Hawaiian Islands in east-west and north-south, the timing of Lahaina Noon varies according to the longitude of the place where it occurs. It took place at 12:16 pm on May 18th in Hilo on Hawaii Island (a southeastern island), the earliest Lahaina Noon before the summer solstice, while Kauai Island (a northwestern island) had the latest Lahaina Noon, at 12:23 pm on May 23rd. For the next viewing of these magical moments, keep watch around 12:37 pm on July 15th in Honolulu, and 12:26 pm on July 24th in Hilo.