Subaru Telescope Pioneers the Use of Adaptive Optics for Optical Observations

A research team from the University of Tokyo/Kavli IPMU, Ehime University, and the National Astronomical Observatory of Japan (NAOJ) has succeeded in conducting the first, full-scale scientific observations with an adaptive optics (AO) system at optical wavelengths. The team connected the Kyoto Tridimensional Spectrograph II (Kyoto3DII, Figure 1, Note 1) with the Subaru Telescope's Adaptive Optics system (AO 188, Note 2) and improved the spatial resolution of images by a factor of 2.5 over images taken without AO. Observations using Kyoto3DII coupled with AO 188 are likely to reveal the detailed structures and the formation processes of galaxies. 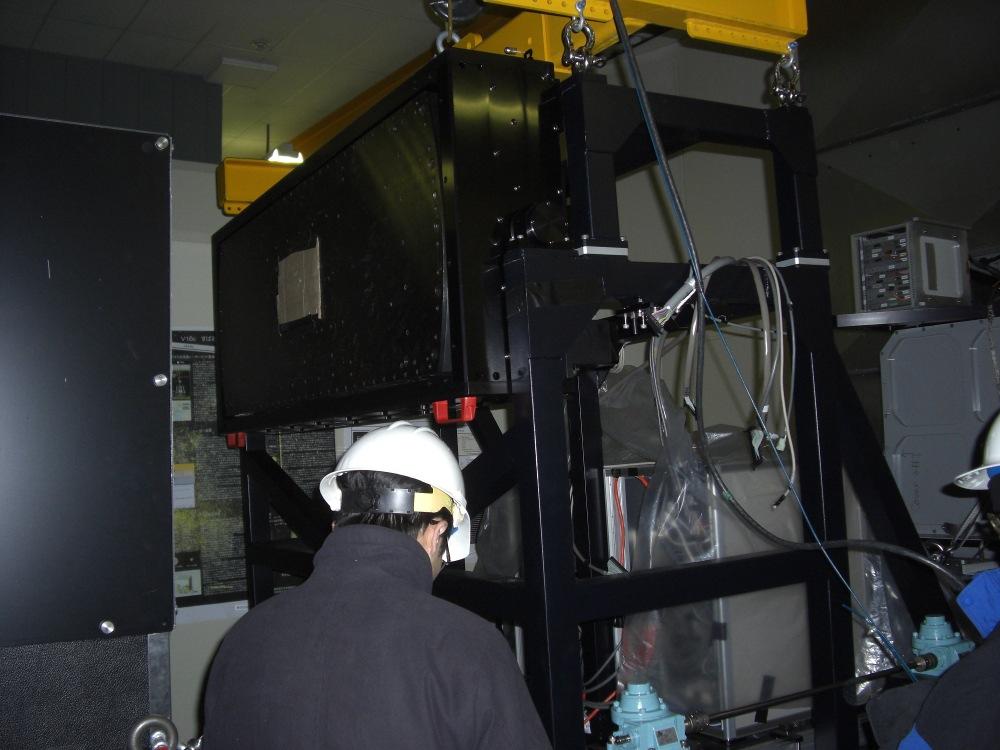 Figure 1: Kyoto3DII at the Nasmyth focus of the Subaru Telescope. The size of the instrument, including the frame, is 2 m high X 2 m wide X 1 m deep. The black box on the left side of the image is part of AO 188. (Credit: NAOJ)

Unlike space telescopes, ground-based telescopes must deal with observational distortions from atmospheric turbulence that degrades the spatial resolution of images. Adaptive optics systems (Note 2) correct for the distortion of light in real time and facilitate the production of high-resolution images. However, the AO systems of large, ground-based telescopes have only been used with infrared instruments. The turbulence of Earth's atmosphere distorts optical light more rapidly and significantly than infrared light. Therefore, the technical challenge of an AO system operating in optical wavelengths is to make faster and finer corrections of light distortion to obtain higher resolution images. Given the huge light-gathering capacity of the Subaru Telescope's 8.2 m primary mirror and the high performance of its AO 188 system in the infrared, the research team hypothesized that this system could also yield high-resolution images at optical wavelengths.

After using numerical simulations to confirm their hypothesis, they developed the connection between AO 188 and Kyoto3DII, an optical instrument that can operate in four modes. Because Kyoto3DII has to be positioned properly at each focus, the team designed and made a new frame mount for observations with the instrument at Nasmyth focus. The team also had to make a beam-splitter specialized for use with optical instruments. Making such a change is difficult, because the span of optical wavelengths is so short relative to infrared ones, but the team accomplished this task. On April 3, 2012 they carried out a test observation with the Kyoto3DII coupled with AO 188 and, for the first time, succeeded in performing full-scale, AO assisted scientific observations at optical wavelengths. Figure 2 shows the difference between the images obtained through this observation and those captured without AO. The team's images display the stars more clearly and at a higher spatial resolution (Note 3). The magnified images in Figure 2 show that that what looks like a very faint star when observed without AO appears as double stars when observed with AO (magnified Figure 2). 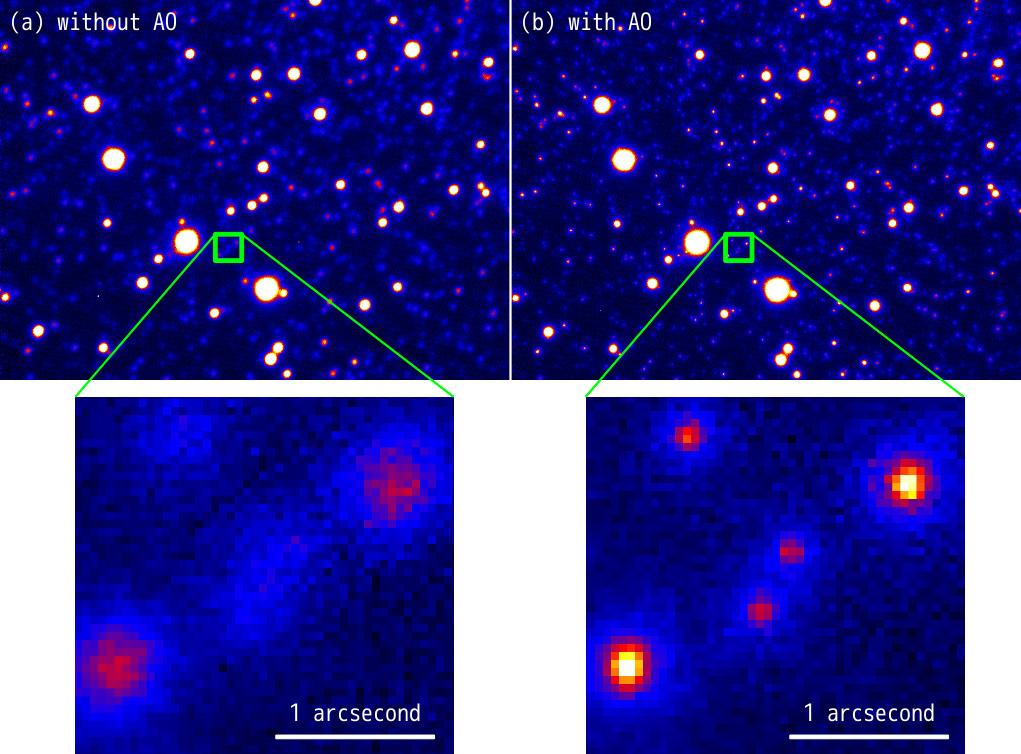 Kyoto3DII can operate in multiple modes, performing not only standard imaging and slit spectroscopy but also integral field spectroscopy, which has a square field of view and is a powerful tool for investigating the detailed structures of extended and multiple objects. The successful connection of Kyoto3DII with AO 188 enables the research team to carry out integral field spectroscopic observations with high resolution at optical wavelengths. Further analysis of the data will allow the astronomers to estimate the ionized state and gas motion of NGC 4151. 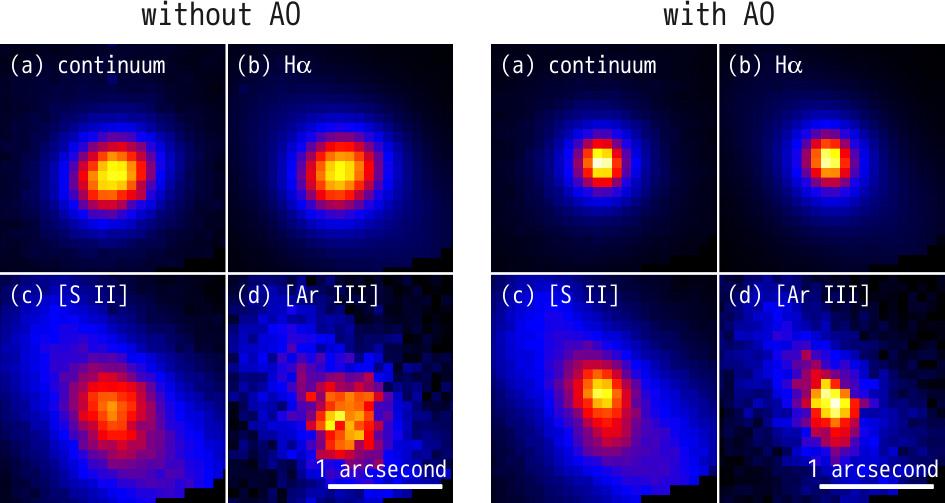 Figure 3: Images of NGC 4151, which has an active galactic nucleus at the center, taken by using Kyoto3DII in the integral field spectroscopy mode with an exposure time of 120 seconds. Left four panels: Images without using AO. Right four panels: Images with use of AO. Within each of the four panels, the high-resolution images of continuum emissions from stars and the active galactic nucleus (upper left), emission lines from hydrogen (upper right), sulfur (lower left), and argon (lower right) were obtained simultaneously. Continuum emissions refer thermally produced light. (Credit: NAOJ)

The team expressed their enthusiasm for the scientific promise of their newly developed basis for AO-assisted optical observations: "Using the combination of Kyoto3DII and AO 188, we hope to reveal the detailed structures of nearby galaxies and the formation processes of distant galaxies."

2. Please see the previous press release about adaptive optics and AO 188 at:
http://www.naoj.org/Pressrelease/2006/11/20/index.html