Subaru Telescope: The Next Generation

The future of the Subaru Telescope is connected with the people who share its Big Island home. Some of the organization's outreach activities focus on cultivating the potential of the next generation so that they can become involved with science, eventually supporting or leading the work at the telescope or in other technical industries. In late January, Subaru Telescope staff members participated in two excellent events designed to reach out to community youth: the Career and Opportunity Expo and Onizuka Science Day.

The Career and Opportunity Expo, hosted by the Career and Technical Education Center, took place on January 26th at Sangha Hall in Hilo. Its goal was to provide information about career choices and to share summer educational and work opportunities with high school students in East Hawaii. This year students from ten different high schools attended.

At the Subaru Telescope's display area, a diverse spectrum of people affiliated with the telescope-- technical, administrative, and public outreach staff, including a university student, a Ph.D. astronomer, and interns--spoke with students about the job opportunities available at the observatory. They worked hard to lure them to Subaru's display, offering free stickers, bookmarks, and NAOJ (National Astronomical Observatory of Japan) calendars.

At first the students were hesitant to approach the Subaru Telescope display area and seemed to believe that any career at the observatory would require an advanced degree. They became more interested and enthusiastic when Subaru staff explained the diversity of jobs available, some of which only required a two-year degree. (Go to this link to view a summary of the types of jobs available: Subaru Telescope: A Team Effort) 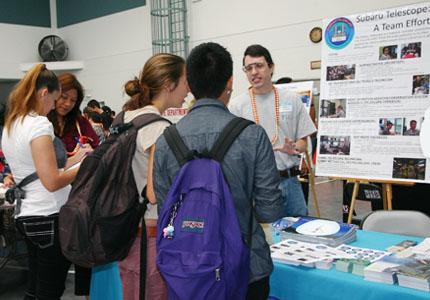 Following closely on the heels of the Career and Opportunity Expo, Subaru PIO staff launched into participation at Onizuka Science Day, hosted by Future Flight Hawaii, and held on January 28th on the campus of the University of Hawaii at Hilo. Named for Ellison Onizuka, a Japanese American astronaut from the Island of Hawai`i who perished in the Challenger disaster, Onizuka Science Day honors his memory by encouraging young people to become interested in science, especially the space sciences. This year's event was particularly poignant, because it fell on the 26th anniversary of the Challenger tragedy.

The Subaru Telescope display at Onizuka Science Day included some old favorites and new items. The young people looked through small, cardboard telescopes and also practiced their remote control skills by trying to move and direct a miniature Cassegrain Instrument Auto Exchanger cart (Abbreviated CIAX and pictured at: http://www.naoj.org/photo/cassegrain.jpg) A new activity was to show attendees some huge 'super bolts', which had been replaced during maintenance of the telescope. The super bolts gave the youth a concrete idea of just how much strength it takes to hold together the 550-ton structure of the Subaru Telescope. 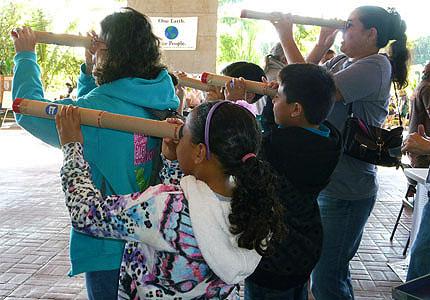 Photo2: Visitors look to the future at Onizuka Science Day.

Dr. Ramsey Lundock, Outreach Associate at Subaru Telescope, added to the observatory's participation in Onizuka Science Day by presenting a workshop on spectroscopy. He gave each workshop member a spectrograph made from a CD. The students could use the spectrograph not only for practice at the workshop but also for looking at spectra at home and in other contexts of their lives. (Link to instructions for making the CD spectrograph.) Lundock demonstrated how scientists look at the spectrum of light emitted by a star or galaxy and then learn about such attributes as its composition and distance.

The interaction between Subaru staff and youth who attended these outreach events was a special time during which staff could communicate their knowledge and enthusiasm for science in general and the Subaru Telescope in particular. Hopefully, some of these students will become astronomers, physicists, engineers, or staff at the Subaru Telescope.