Subaru Telescope Director Hideki Takami participated in Subaru's recent effort to communicate astronomy and telescope news to a wider audience through electronic social media networks. In his message via Subaru's new Japanese Twitter site, he warmly greeted readers with a brief message of appreciation to those who support the telescope's operation and then gave news about the upcoming installation of Hyper Suprime-Cam (HSC) in 2012. The main parts of his message follow:

Subaru Telescope is operated by the National Astronomical Observatory of Japan and is located atop Mauna Kea on the island of Hawaii. I want to thank you for your support of the telescope. We received many sympathetic and encouraging tweets when an accidental spill of coolant in July, 2011 temporarily prevented us from conducting observations. Thanks to many types of support and expertise, Subaru Telescope has recovered almost of all of its functions and is making observations every night.

This year Hyper Suprime-Cam (HSC), which has a wide field of view seven times the size of the full moon, will be mounted on the Subaru Telescope. At present, the technical staff is carefully preparing for its installation in the challenging context of a high altitude, 4,200m above sea level.

Subaru Telescope is committed to utilizing a variety of channels — from professional websites, scientific journals and organizations to newspapers and social media — to communicate with people from many walks of life and in different parts of the world about Subaru's contributions. 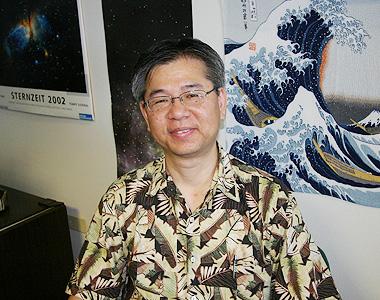