The Role of Subaru Telescope in Supernova Research: A Q and A Interview with Nobel Laureate Saul Perlmutter

The 2011 Nobel Prize in Physics was awarded "for the discovery of the accelerating expansion of the Universe through observations of distant supernovae" with one half to Saul Perlmutter (Lawrence Berkeley National Lab & the University of California, Berkeley) and the other half jointly to Brian P. Schmidt (Australian National University) and Adam G. Riess (Johns Hopkins University & Space Science Institute). In his speech at the Nobel banquet on December 10, 2011, Perlmutter indicated the importance of the award for all three laureates and their teams (The Supernova Cosmology Project and the High Z Supernova Search Team):

We represent a community of scientists, with whom we tackled one of the most enticing ancient questions; What is the fate and extent of the Universe? According to Einstein, the answer should be determined by how much stuff - mass - is in the Universe, gravitationally self-attracting and slowing the Universe's expansion. We all set out to measure this slowing, using the brightness and colors of distant supernovae i.e., exploding stars.

To the surprise of both teams, they found that "we live in a Universe that apparently isn't slowing down at all - it's speeding up, and we have no idea why." The discovery points to the major role that dark energy plays in the evolution of the Universe.

Japanese researchers have been collaborating with Saul Perlmutter, and some of them have been a part of his Supernova Cosmology Project team. One of this project's current team members, Nao Suzuki, a researcher at LBNL (Lawrence Berkeley National Lab), recently interviewed Perlmutter, who discussed the role of Subaru Telescope for supernova cosmology research.

――Q. What do you think of Subaru Telescope's role for the study of supernova cosmology?
A. I think that the main point to convey is that the Subaru Telescope, together with the instruments being built with wide-field capabilities, is the telescope we always dreamt to have... It has the aperture to integrate great distances and a wide-field to see enough sky to observe a significant number of supernovae every time you go to the telescope. The combination is unbeatable, at least for ground-based telescopes today.
We were able to show in the earlier supernova study in 2002 that we could implement a reasonably sized, large program with ground-based telescopes and find supernovae at a range of redshifts that was more than competitive with the very large programs of the Hubble Space Telescope (HST). More frequent access with ground-based telescopes allowed us to amass larger data sets than we could build from occasional access to the HST. The story only gets better when we start talking about Hyper-Suprime Cam (HSC), which will really open up this area even more.

The fact that Subaru has a variety of instruments allowed us to do other things besides the discovery and follow-up observations of supernovae; it is able to do spectroscopy, which is also a very important part.

[This type of observation] can only be done on telescopes of Subaru Telescope's [large] size. Subaru Telescope has done a remarkable job in seeing control, [i.e.,controlling the blurring effects of air turbulence in the atmosphere]. That makes a huge difference in spectroscopy for follow-up work on supernovae.

――Q. How did a collaboration with Subaru Telescope begin?
Perlmutter recounted a meeting with astronomers Sadanori Okamura and Mamoru Doi, both of the University of Tokyo, at the 1997 conference of the International Astronomical Union (IAU) in Kyoto, just as Perlmutter's team was about to present their initial results in the following year. They discussed the contradiction between the age of the universe and the present expansion rate, which hinted at the meaning of Perlmutter's team's result.
A. We were just beginning to understand the surprises in the data during the meeting... and we had some very productive conversations [with them] that made it obvious that we would enjoy working with each other. We saw Mamoru's work on the multi-dichroic mirror [that could take 15 narrow band images simultaneously]... We also liked the other techniques for distance measurement that [Yuzuru Yoshii's group] had developed. As soon as the wide field camera [the Subaru Prime Focus Camera or Suprime-Cam] was installed on the Subaru Telescope, we immediately started to talk and put together a plan for how we could run a search [for supernovae]. We did a pilot search in 2001, and we conducted a big campaign in 2002. We tried to overlap with other projects such as the Subaru-Deep Field so that we could take advantage of each other's telescope time and share the data sets. Since then, we have worked together on all of the later runs, and for a number of years there was always a follow-up going on at Subaru on other searches. 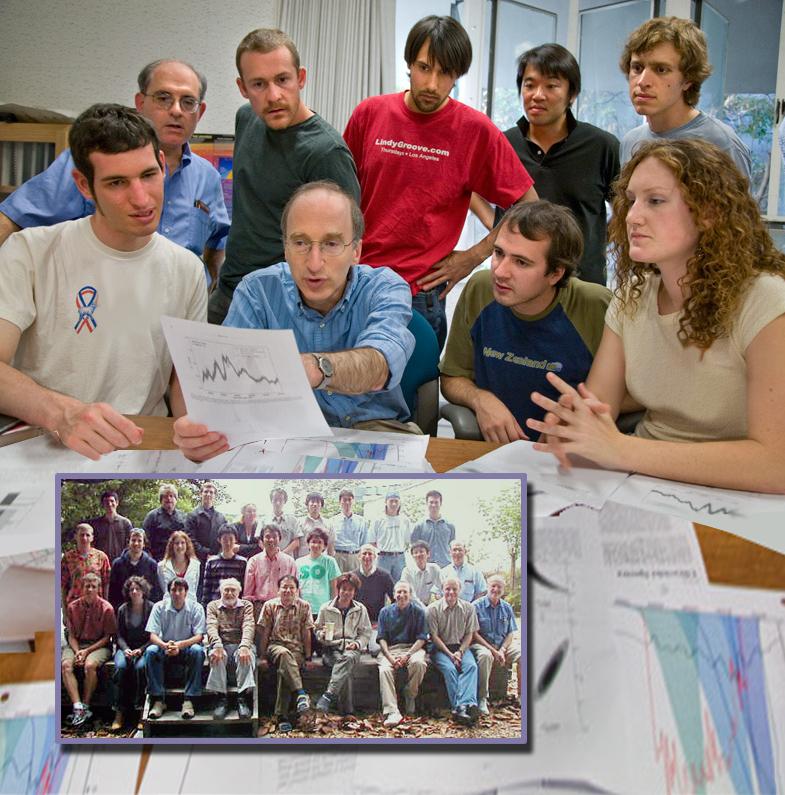 Photo: Researchers discuss the observational results with Dr. Saul Perlmutter. Inset is a group picture taken during one of the workshops of the Supernova Cosmology Project where several astronomers from Japan can be seen. (Photo courtesy of Lawrence Berkeley National Lab).

――Q. What is the contribution of Subaru Telescope today?
A. In the end, at these very high redshifts, there are only a few telescopes that have made a major contribution, and these are basically: Keck, the Very Large Telescope (VLT), Gemini, and Subaru.
Tomoki Morokuma published [in 2010] a whole catalog of the high-z spectra taken with Subaru's Faint Object Camera and Spectrograph (FOCAS).

――Q. What are the future prospects for Subaru Telescope's involvement in supernova cosmology research?
A. With HSC, we might be able to generate discovery sets of supernovae that would become the basis for another whole generation of extremely high redshift supernova work. The red sensitivity of HSC is very important.
We hope that we will... generate impressive high-z supernova surveys by collaboration with other teams who want to use the same data sets and go really deep. That would allow us to edge into a high redshift range.

Subaru Telescope looks forward to future collaborations to identify far-distant Type Ia supernovae. HSC, Subaru's forthcoming instrument at prime focus, will be able to survey even larger portions of the sky for these elusive but highly significant objects. Future findings may help to clarify the mystery of why and how the expansion of the Universe has been accelerating.